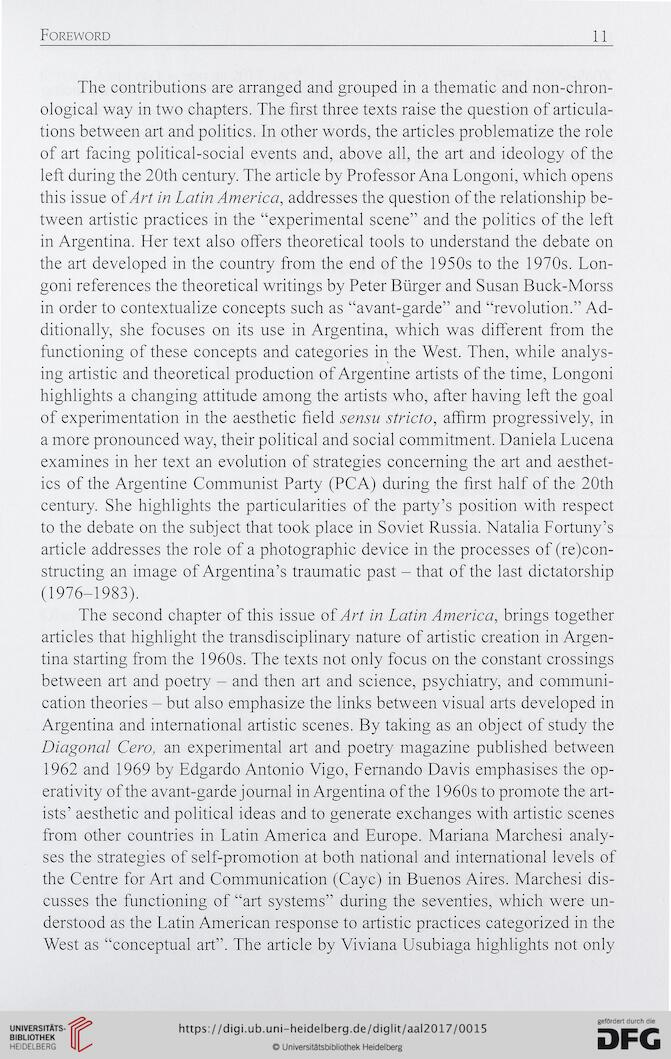 The contributions are arranged and grouped in a thematic and non-chron-
ological way in two chapters. The first three texts raise the question of articula-
tions between art and politics. In other words, the articles problematize the role
of art facing political-social events and, above all, the art and ideology of the
left during the 20th century. The article by Professor Ana Longoni, which opens
this issue of Art in Latin America, addresses the question of the relationship be-
tween artistic practices in the “experimental scene” and the politics of the left
in Argentina. Her text also offers theoretical tools to understand the debate on
the art developed in the country from the end of the 1950s to the 1970s. Lon-
goni references the theoretical writings by Peter Bürger and Susan Buck-Morss
in order to contextualize concepts such as “avant-garde” and “revolution.” Ad-
ditionally, she focuses on its use in Argentina, which was different from the
functioning of these concepts and categories in the West. Then, while analys-
ing artistic and theoretical production of Argentine artists of the time, Longoni
highlights a changing attitude among the artists who, after having left the goal
of experimentation in the aesthetic field sensu stricto, affirm progressively, in
a more pronounced way, their political and social commitment. Daniela Lucena
examines in her text an evolution of strategies concerning the art and aesthet-
ics of the Argentine Communist Party (PCA) during the first half of the 20th
century. She highlights the particularities of the party’s position with respect
to the debate on the subject that took place in Soviet Russia. Natalia Fortuny’s
article addresses the role of a photographic device in the processes of (re)con-
structing an image of Argentina’s traumatic past - that of the last dictatorship
(1976-1983).
The second chapter of this issue of Art in Latin America, brings together
articles that highlight the transdisciplinary nature of artistic creation in Argen-
tina starting from the 1960s. The texts not only focus on the constant crossings
between art and poetry - and then art and science, psychiatry, and communi-
cation theories - but also emphasize the links between visual arts developed in
Argentina and international artistic scenes. By taking as an object of study the
Diagonal Cero, an experimental art and poetry magazine published between
1962 and 1969 by Edgardo Antonio Vigo, Fernando Davis emphasises the op-
erativity of the avant-garde journal in Argentina of the 1960s to promote the art-
ists’ aesthetic and political ideas and to generate exchanges with artistic scenes
from other countries in Latin America and Europe. Mariana Marches! analy-
ses the strategies of self-promotion at both national and international levels of
the Centre for Art and Communication (Cayc) in Buenos Aires. Marches! dis-
cusses the functioning of “art systems” during the seventies, which were un-
derstood as the Latin American response to artistic practices categorized in the
West as “conceptual art”. The article by Viviana Usubiaga highlights not only