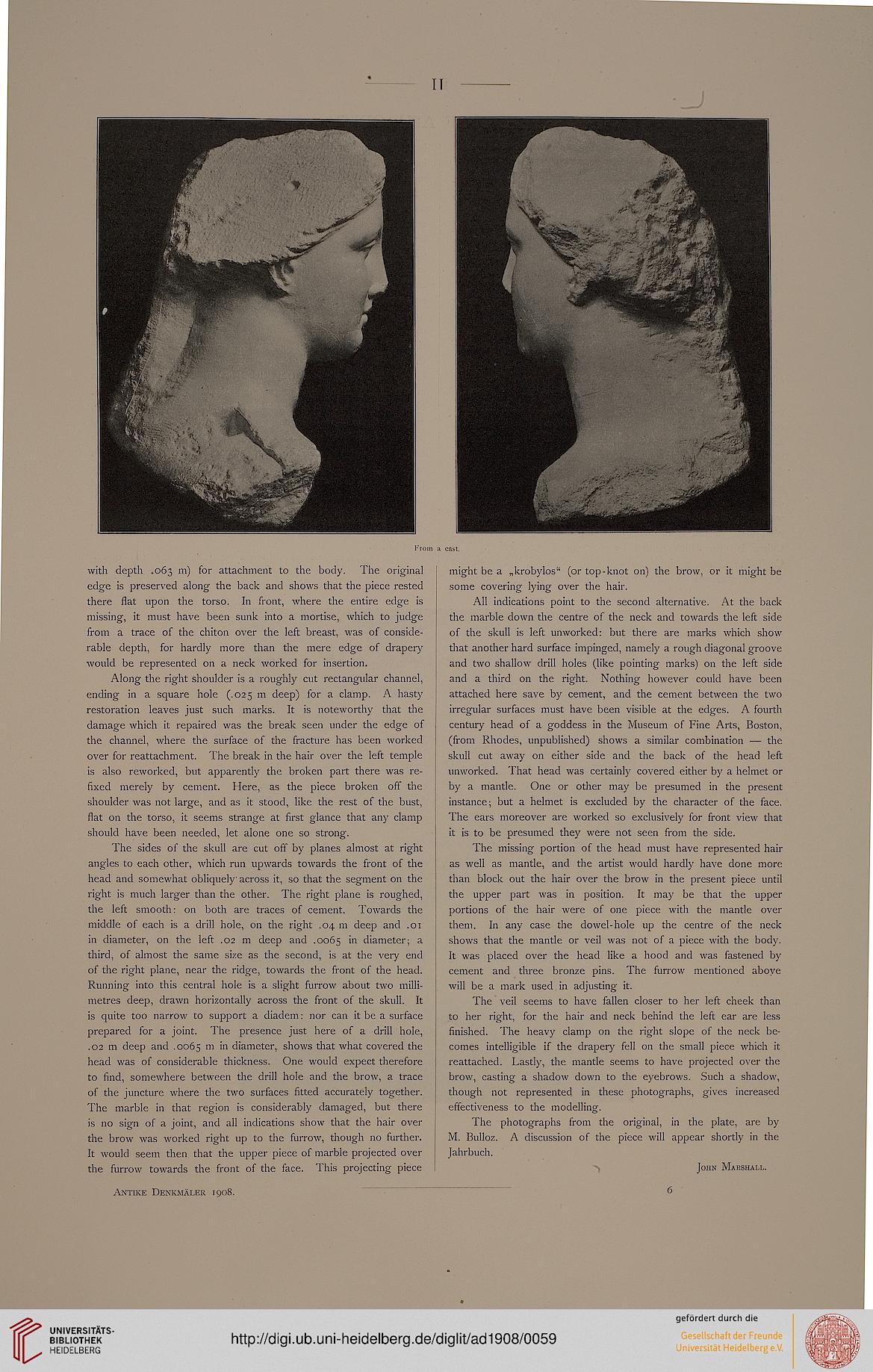 with depth .063 m) for attachment to the body. The original
edge is preserved along the back and shows that the piece rested
there flat upon the torso. In front, where the entire edge is
missing, it must have been sunk into a mortise, which to judge
from a trace of the chiton over the left breast, was of conside-
rable depth, for hardly more than the mere edge of drapery
would be represented on a neck worked for insertion.

Along the right Shoulder is a roughly cut rectangular Channel,
ending in a Square hole (.025 m deep) for a clamp. A hasty
restoration leaves just such marks. It is noteworthy that the
damage which it repaired was the break seen under the edge of
the channel, where the surface of the fracture has been worked
over for reattachment. The break in the hair over the left temple
is also reworked, but apparently the broken part there was re-
fixed merely by cement. Here, as the piece broken off the
Shoulder was not large, and as it stood, like the rest of the bust,
flat on the torso, it seems stränge at first glance that any clamp
should have been needed, let alone one so strong.

The sides of the skull are cut off by planes almost at right
angles to each other, which run upwards towards the front of the
head and somewhat obliquely across it, so that the segment on the
right is much larger than the other. The right plane is roughed,
the left smooth: on both are traces of cement. Towards the
middle of each is a drill hole, on the right .04 m deep and .01
in diameter, on the left .02 m deep and .0065 in diameter; a
third, of almost the same size as the second, is at the very end
of the right plane, near the ridge, towards the front of the head.
Running into this central hole is a slight furrow about two milli-
metres deep, drawn horizontally across the front of the skull. It
is quite too narrow to support a diadem: nor can it be a surface
prepared for a Joint. The presence just here of a drill hole,
.02 m deep and .0065 m in diameter, shows that what covered the
head was of considerable thickness. One would expect therefore
to find, somewhere between the drill hole and the brow, a trace
of the juncture where the two surfaces fitted accurately together.
The marble in that region is considerably damaged, but there
is no sign of a Joint, and all indications show that the hair over
the brow was worked right up to the furrow, though no further.
It would seem then that the upper piece of marble projected over
the furrow towards the front of the face. This projecting piece

might be a „krobylos" (or top-knot on) the brow, or it might be
some covering lying over the hair.

All indications point to the second alternative. At the back
the marble down the centre of the neck and towards the left side
of the skull is left unworked: but there are marks which show
that another hard surface impinged, namely a rough diagonal groove
and two shallow drill holes (like pointing marks) on the left side
and a third on the right. Nothing however could have been
attached here save by cement, and the cement between the two
irregulär surfaces must have been visible at the edges. A fourth
Century head of a goddess in the Museum of Fine Arts, Boston,
(from Rhodes, unpublished) shows a similar combination — the
skull cut away on either side and the back of the head left
unworked. That head was certainly covered either by a helmet or
by a mantle. One or other may be presumed in the present
instance; but a helmet is excluded by the character of the face.
The ears moreover are worked so exclusively for front view that
it is to be presumed they were not seen from the side.

The missing portion of the head must have represented hair
as well as mantle, and the artist would hardly have done more
than block out the hair over the brow in the present piece until
the upper part was in position. It may be that the upper
portions of the hair were of one piece with the mantle over
them. In any case the dowel-hole up the centre of the neck
shows that the mantle or veil was not of a piece with the body.
It was placed over the head like a hood and was fastened by
cement and three bronze pins. The furrow mentioned aboye
will be a mark used in adjusting it.

The veil seems to have fallen closer to her left cheek than
to her right, for the hair and neck behind the left ear are less
finished. The heavy clamp on the right slope of the neck be-
comes intelligible if the drapery feil on the small piece which it
reattached. Lastly, the mantle seems to have projected over the
brow, casting a shadow down to the eyebrows. Such a shadow,
though not represented in these photographs, gives increased
effectiveness to the modelling.

The photographs from the original, in the plate, are by
M. Bulloz. A discussion of the piece will appear shortly in the
Jahrbuch.