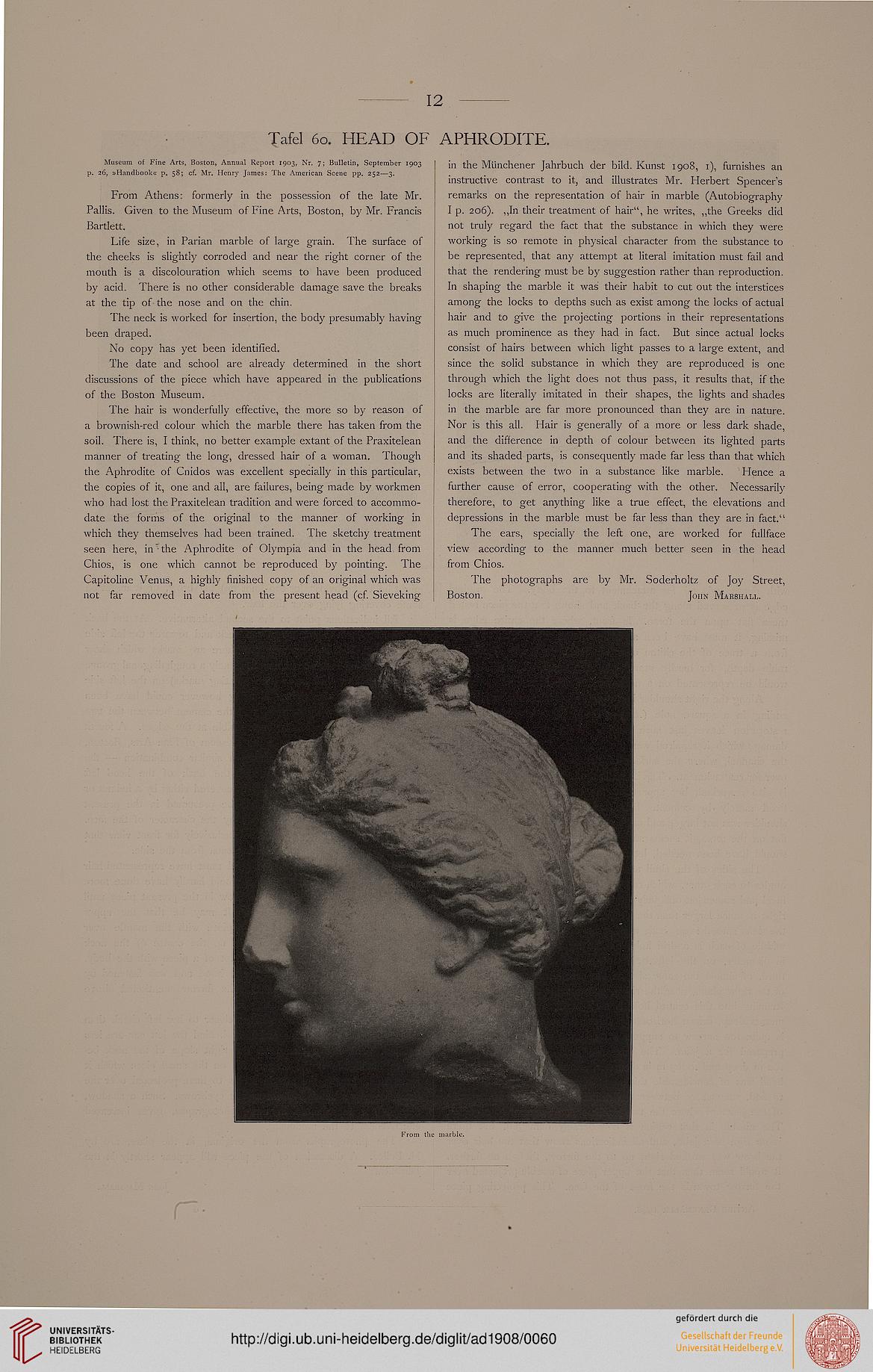 From Athens: formerly in the possession of the late Mr.
Pallis. Given to the Museum of Fine Arts, Boston, by Mr. Francis
Bartlett.

Life size, in Parian marble of large grain. The surface of
the cheeks is slightly corroded and near the right corner of the
mouth is a discolouration which seems to have been produced
by acid. There is no other considerable damage save the breaks
at the tip of the nose and on the chin.

The neck is worked for insertion, the body presumably having
been draped.

No copy has yet been identified.

The date and school are already determined in the short
discussions of the piece which have appeared in the publications
of the Boston Museum.

The hair is wonderfully effective, the more so by reason of
a brownish-red colour which the marble there has taken from the
soil. There is, I think, no better example extant of the Praxitelean
manner of treating the long, dressed hair of a woman. Though
the Aphrodite of Cnidos was excellent specially in this particular,
the copies of it, one and all, are failures, being made by workmen
who had lost the Praxitelean tradition and were forced to accommo-
date the forms of the original to the manner of working in
which they themselves had been trained. The sketchy treatment
seen here, in "the Aphrodite of Olympia and in the head from
Chios, is one which cannot be reproduced by pointing. The
Capitoline Venus, a highly finished copy of an original which was
not far removed in date from the present head (cf. Sieveking

in the Münchener Jahrbuch der bild. Kunst 1908, 1), furnishes an
instructive contrast to it, and illustrates Mr. Herbert Spencer's
remarks on the representation of hair in marble (Autobiography
I p. 206). „In their treatment of hair", he writes, „the Greeks did
not truly regard the fact that the substance in which they were
working is so remote in physical character from the substance to
be represented, that any attempt at literal imitation must fail and
that the rendering must be by Suggestion rather than reproduction.
In shaping the marble it was their habit to cut out the interstices
among the locks to depths such as exist among the locks of actual
hair and to give the projecting portions in their representations
as much prominence as they had in fact. But since actual locks
consist of hairs between which light passes to a large extent, and
since the solid substance in which they are reproduced is one
through which the light does not thus pass, it results that, if the
locks are literally imitated in their shapes, the lights and shades
in the marble are far more pronounced than they are in nature.
Nor is this all. Hair is generally of a more or less dark shade,
and the difference in depth of colour between its lighted parts
and its shaded parts, is consequently made far less than that which
exists between the two in a substance like marble. Hence a
further cause of error, cooperating with the other. Necessarily
therefore, to get anything like a true effect, the elevations and
depressions in the marble must be far less than they are in fact."

The ears, specially the left one, are worked for fullface
view according to the manner much better seen in the head
from Chios.

The photographs are by Mr. Soderholtz of Joy Street,
Boston. John Marshall.