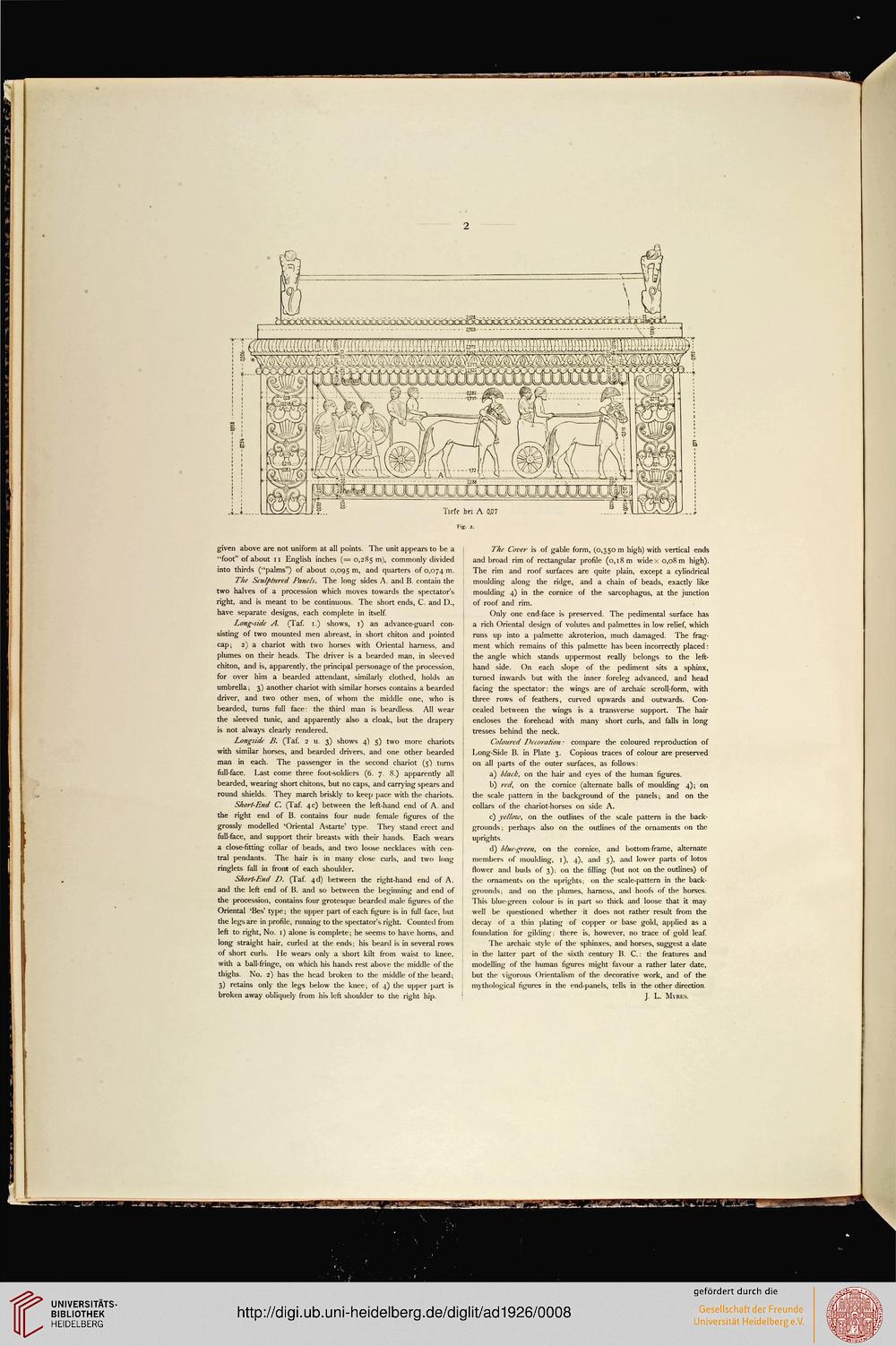 The Satlptnred Panels. The long sicles A- and B. contain the
two halves of a procession which moves towards the spectator's
right, and is meant to be continuous. The short ends, C. and D.,
have separate designs, each complete in itself.

Long-side A. (Taf. 1.) shows, 1) an advance-guard con-
sisting of two mounted men abreast, in short chiton and pointed
cap; 2) a chariot with two horses with Oriental harness, and
plumes on their heads. The driver is a bearded man, in eleeved
chiton, and is, apparently, the prineipal personage of the procession,
for over him a bearded attendant, similarly clothed, holds an
umbrella; 3) another chariot with similar horses contains a bearded
driver, and two other men, of whom the middle one, who is
bearded, turns füll face: the third man is beardless. All wear
the sleeved tunic, and apparently also a cloak, but the drapery
is not always clearly rendered.

Longside B. (Taf. 2 u. 3) shows 4) 5) two more chariots
with similar horses, and bearded drivers, and one other bearded
man in each. The passenger in the second chariot (5) turns
füll-face. Last come three foot-soldiers (6. 7 S.) apparently all
bearded, wearing short chitons, but no caps, and carr)'ing spears and
round shields. They march briskly to keep pace with the chariots.

Short-End C. (Taf. 4c) between the left-hand end of A. and
the right end of B. contains four nude femalc figures of the
grossly modelled 'Oriental Astarte' type. They stand erect and
full-face, and support their breasts with their hands. Each wears
a close-fitting collar of beads, and two loose necklaces with cen-
tral pendants. The hair is in many close curls, and two long
ringlets fall in front of each Shoulder.

Short-End D. (Taf. 4d) between the right-hand end of A.
and the left end of B. and so between the beginning and end of
the procession, contains four grotesque bearded male figures of the
Oriental 'Bes1 type; the Upper part of each figurc is in füll face, but
the Icgsare in profile, running to the spectator's right. Counted from
left to right, No. 1) alone is complete; he seems to have horns, and
long straight hair, curled at the ends; his beard is in several rows
of short curls. He wears only a short kilt from waist to knee,
with a ball-fringe, on which his hands rest above the middle of the
thighs. No. 2) has the head broken to the middle of the beard;
3) retains only the legs below the knee; of 4) the Upper part is
broken away obliquely from Ins left Shoulder to the right hip.

The Cover is of gable form, (0,350 m high) with vertical ends
and broad Hm of reetangular profile (0,18 m widex o,oS m high).
The rim and roof surfaces are quite piain, except a cylindrical
moulding along the ridge, and a chain of beads, exactly like
moulding 4) in the cornice of the sarcophagus, at the junetion
of roof and rim.

Only one end-face is preserved. The pedimental surface has
a rieh Oriental design of volutes and palmettes in low relief, which
runs up into a palmette akroterion, much damaged. The frag-
ment which remains of this palmette has been incorreeth/ placed:
the angle which Stands uppermost really belongs to the left-
hand side. On each slope of the pediment sits a sphinx,
turned inwards but with the inner foreleg advanced, and head
facing the speetator: the wings are of archaic scroll-form, with
three rows of feathers, curved upwards and outwards. Con-
cealed between the wings is a transverse support. The hair
encloses the forehead with many short curls, and falls in long
tresses behind the neck.

Coloured Ihioration ■ compare the coloured reproduetion of
Long-Side B. in Plate 3. Copious traces of colour are preserved
on all parts of the outer surfaces, as follows:

a) biack, on the hair and eyes of the human figures.

b) red, on the cornice (alternate balls of moulding 4); on
the scale pattern in the background of the panels; and on the
collars of the chariot-horses on side A.

d) blue-p-een, on the cornice, and bottom-frame, alternate
members of moulding, 1), 4), and 5), and lower parts of lotos
flower and buds of 3), on the filling (but not on the outlines) of
the ornaments on the uprights. un the scale-pattern in the back-
grounds, and on the plumes, harness, and hoofs of the horses.
This blue-grecn colour is in part so thick and loose that it may
well be questioned whether it cloes not rather result from the
decay of a thin plating of copper or base gold, applied as a
foundation for gilding; there is, however, no trace of gold leaf.

The archaic style of the sphinxes, and horses, suggest a date
in the lalter part of the sixth Century B. C.: the features and
niodelling of the human figures might fa\our a rather later date,
but the \igorous Orientaüsm of the decorative work, and of the
mythological figures in the end-panels, teils in the other direction