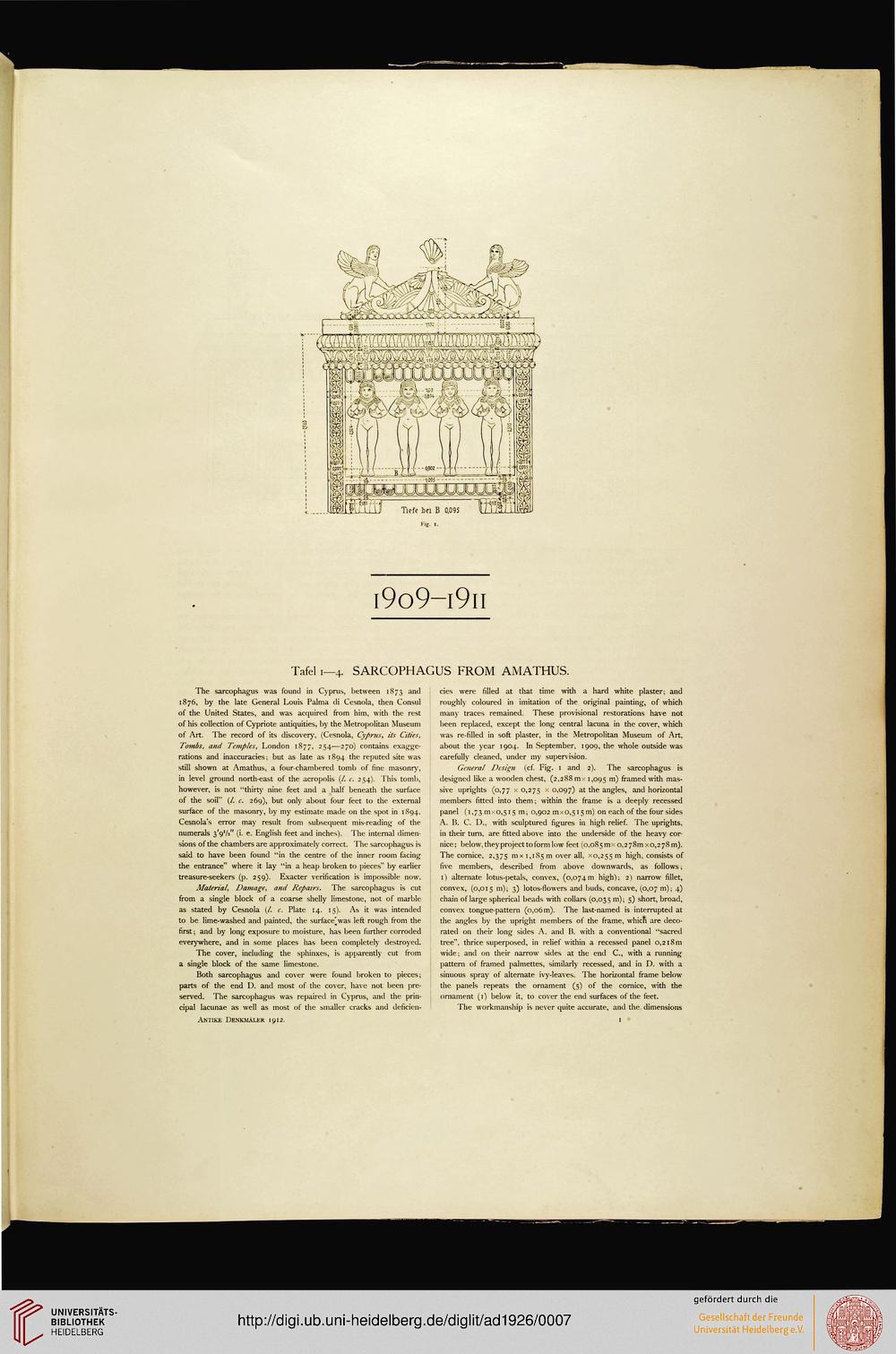 The sarcophagus was found in Cyprus, between 1873 and
1876, by the late General Louis Palma di Cesnola, then Consul
of the United States, and was acquired from him, with the rest
of his collection of Cypriote antiquities. by the Metropolitan Museum
of Art. The record of its discovery, (Cesnola, Cyfirus, its CMet,
Tombs, and Temples, London 1877, 254—270) contains exagge-
rations and inaccuracies; but as late as 1894 the reputed site was
still shown at Amathus, a four-chambered tomb of fine masonry,
in level ground north-east of the acropolis (/. e. 254). This tomb,
however, is not "thirty nine feet and a half beneath the surface
of the soil" (/. r. 269), but only about four feet to the external
surface of the masonry, l>y my estimate made on the spot in 1S94.
Cesnola's error may result from subsequent mis-reading of the
numerals 3'9'/." (i. e. English feet and inches). The internal dimen-
sions of the Chambers are approximately correct. The sarcophagus is
said to have been found "in the centre of the inner room facing
the entrance" where it lay "in a heap broken to pieces" by earlier
treasure-seekers (p. 259). Exacter verification is impossible now.

Material, Damtige, and Repairs. The sarcophagus is cut
from a single block of a coarse shelly limestone, not of marble
as stated by Cesnola (/. e. Plate 14. 15). As it was intended
to be lime-washed and painted, the surface^ was left rough from the
first; and by long exposure to moisture, has been further corroded
everywhere, and in some places has been completely destroyed.

The Cover, including the sphinxes, is apparently cut from
a single block of the same limestone.

Both sarcophagus and cover were found broken to pieces;
parts of the end D, and most of the cover, have not been pre-
served. The sarcophagus was repaired in Cyprus, and the prin-
cipal lacunae as well as most of the smaller cracks and dcficien-

cies were filled at that time with a hard white plaster; and
roughly coloured in imitation of the original painting, of which
man)- traces remained. These provisional restorations have not
been replaced, except the long central lacuna in the cover, which
was re-filled in soft plaster, in the Metropolitan Museum of Art,
about the year 1904. In September, 1909, the whole outside was
carefully cleaned, under my supenision.

The workmanship is never quite aecurate, and the dimensions