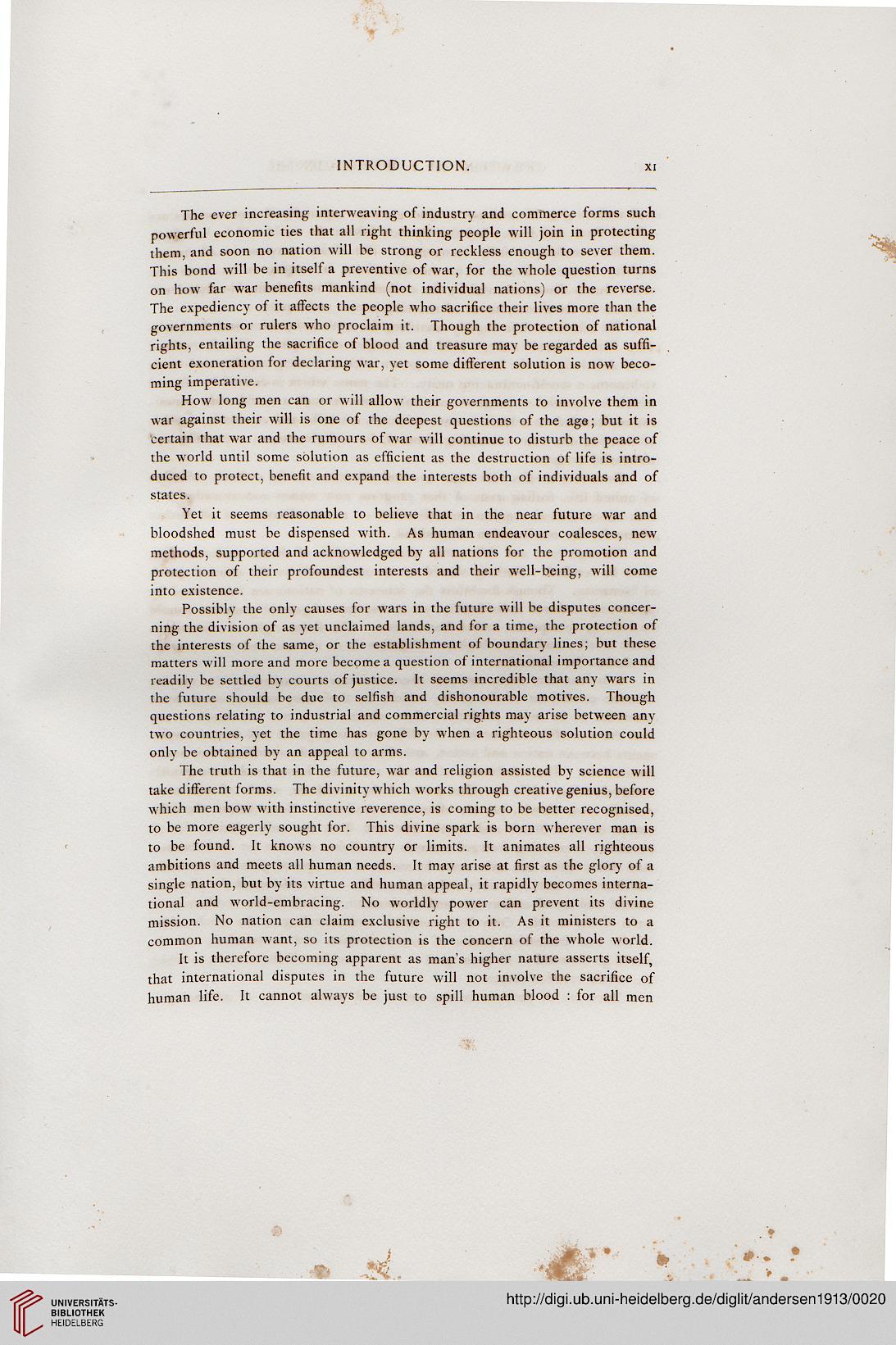 The ever increasing interweaving of industry and commerce forms such
powerful economic ties that all right thinking people will join in protecting
them, and soon no nation will he strong or reckless enough to sever them.
This bond will be in itself a preventive of war, for the whole question turns
on how far war benefits mankind (not individual nations) or the reverse.
The expediency of it affects the people who sacrifice their lives more than the
governments or rulers who proclaim it. Though the protection of national
rights, entailing the sacrifice of blood and treasure may be regarded as suffi-
cient exoneration for declaring war, yet some different solution is now beco-
ming imperative.

How long men can or will allow their governments to involve them in
war against their will is one of the deepest questions of the age; but it is
certain that war and the rumours of war will continue to disturb the peace of
the world until some solution as efficient as the destruction of life is intro-
duced to protect, benefit and expand the interests both of individuals and of
states.

Yet it seems reasonable to believe that in the near future war and
bloodshed must be dispensed with. As human endeavour coalesces, new
methods, supported and acknowledged by all nations for the promotion and
protection of their profoundest interests and their well-being, will come
into existence.

Possibly the only causes for wars in the future will be disputes concer-
ning the division of as yet unclaimed lands, and for a time, the protection of
the interests of the same, or the establishment of boundary lines; but these
matters will more and more become a question of international importance and
readily be settled by courts of justice. It seems incredible that any wars in
the future should be due to selfish and dishonourable motives. Though
questions relating to industrial and commercial rights may arise between any
two countries, yet the time has gone by when a righteous solution could
only be obtained by an appeal to arms.

The truth is that in the future, war and religion assisted by science will
take different forms. The divinity which works through creative genius, before
which men bow with instinctive reverence, is coming to be better recognised,
to be more eagerly sought for. This divine spark is born wherever man is
to be found. It knows no country or limits. It animates all righteous
ambitions and meets all human needs. It may arise at first as the glory of a
single nation, but by its virtue and human appeal, it rapidly becomes interna-
tional and world-embracing. No worldly power can prevent its divine
mission. No nation can claim exclusive right to it. As it ministers to a
common human want, so its protection is the concern of the whole world.

It is therefore becoming apparent as mans higher nature asserts itself,
that international disputes in the future will not involve the sacrifice of
human life. It cannot always be just to spill human blood : for all men