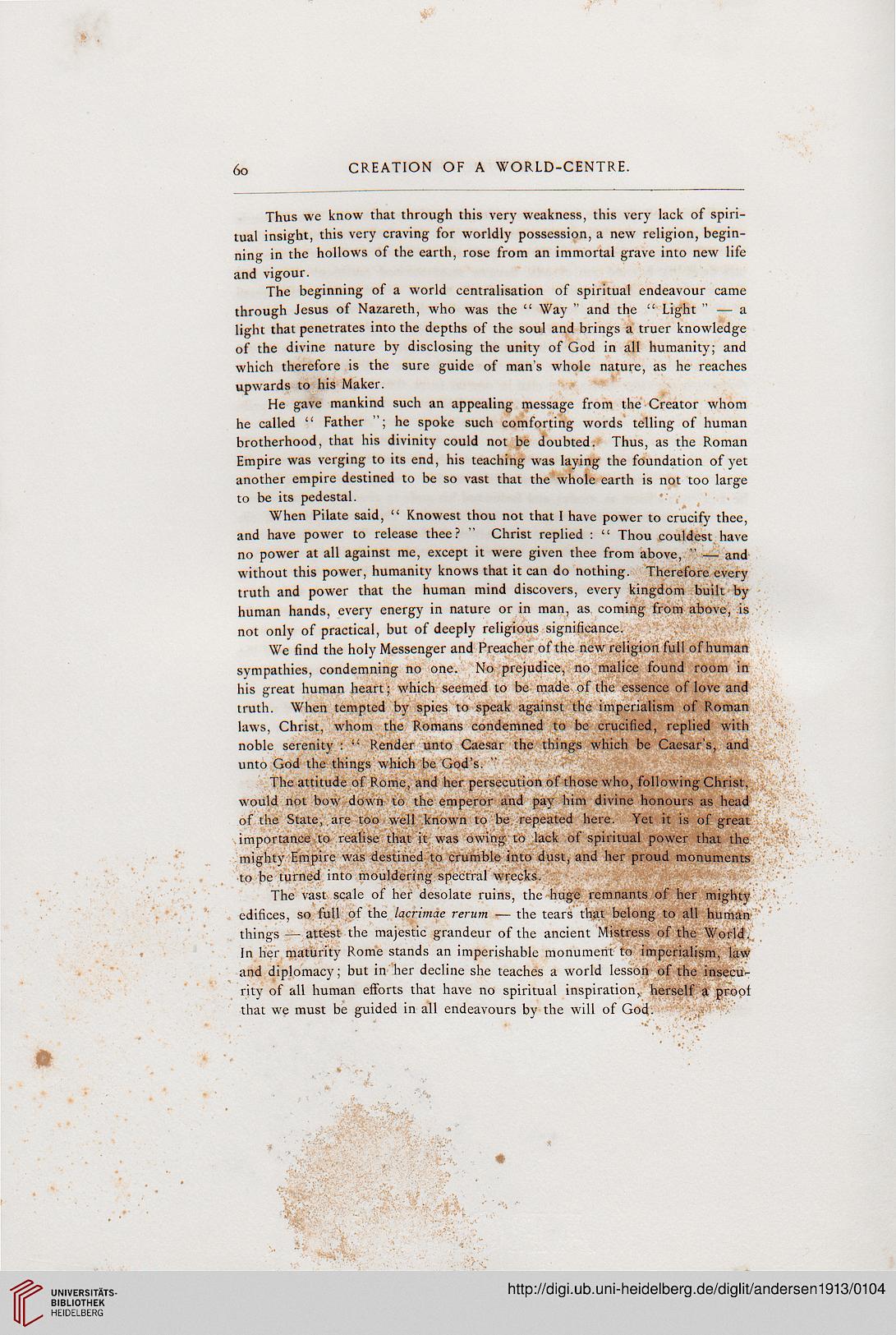 Thus we know that through this very weakness, this very lack of spiri-
tual insight, this very craving for worldly possession, a new religion, begin-
ning in the hollows of the earth, rose from an immortal grave into new life
and vigour.

The beginning of a world centralisation of spiritual endeavour came
through Jesus of Nazareth, who was the " Way " and the " Light " — a
light that penetrates into the depths of the soul and brings a truer knowledge
of the divine nature by disclosing the unity of God in all humanity; and
which therefore is the sure guide of man s whole nature, as he reaches
upwards to his Maker.

He gave mankind such an appealing message from the Creator whom
he called " Father "; he spoke such comforting words telling of human
brotherhood, that his divinity could not be doubted. Thus, as the Roman
Empire was verging to its end, his teaching was laying the foundation of yet
another empire destined to be so vast that the whole earth is not too large
to be its pedestal.

When Pilate said, " Knowest thou not that I have power to crucify thee,
and have power to release thee? " Christ replied : " Thou couldest have
no power at all against me, except it were given thee from above, % — and
without this power, humanity knows that it can do nothing. Therefore every
truth and power that the human mind discovers, every kingdom built by
human hands, every energy in nature or in man, as coming from above, is
not only of practical, but of deeply religious significance.

We find the holy Messenger and Preacher of the new religion full of human
sympathies, condemning no one. No prejudice, no malice found room in
his great human heart; which seemed to be made of the essence of love and
truth. When tempted by spies to speak against the imperialism of Roman
laws, Christ, whom the Romans condemned to be crucified, replied with
noble serenity : " Render unto Caesar the things which be Caesar's, and
unto God the things which be God's.

The attitude of Rome, and her persecution of those who, following Christ,
would not bow down to the emperor and pay him divine honours as head
of the State, are too well known to be repeated here. Yet it is of great
importance to realise that it was owing to lack of spiritual power that the
mighty Empire was destined to crumble into dust, and her proud monuments
to be turned into mouldering spectral wrecks.

The vast scale of her desolate ruins, the huge remnants of her mighty
edifices, so full of the lacrimae rerum — the tears that belong to all human
things — attest the majestic grandeur of the ancient Mistress of the World.
In her maturity Rome stands an imperishable monument to imperialism, law
and diplomacy; but in her decline she teaches a world lesson of the insecu-
rity of all human efforts that have no spiritual inspiration, herself a proof
that we must be guided in all endeavours by the will of God.