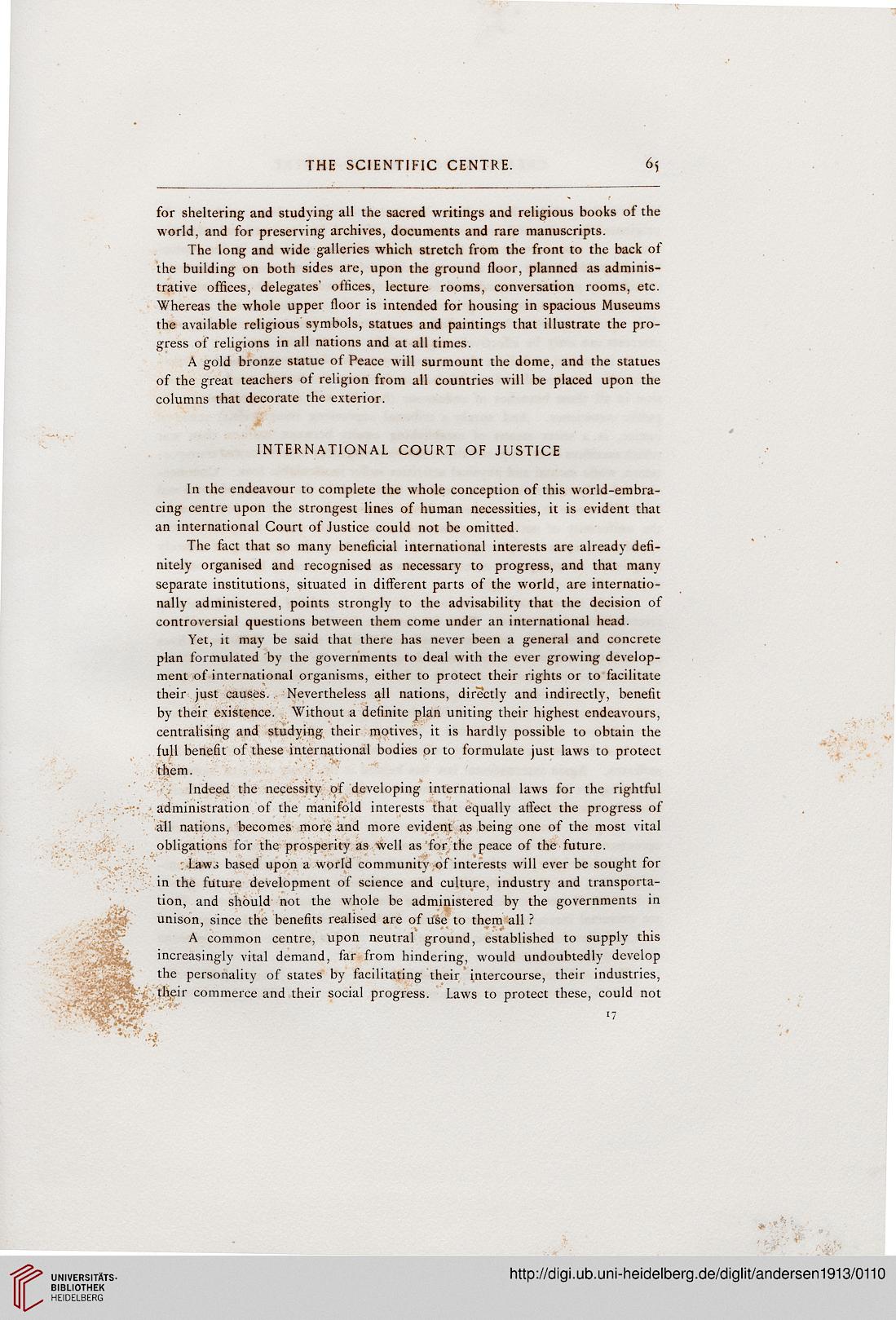 for sheltering and studying all the sacred writings and religious books of the
world, and for preserving archives, documents and rare manuscripts.

The long and wide galleries which stretch from the front to the back of
the building on both sides are, upon the ground floor, planned as adminis-
trative offices, delegates' offices, lecture rooms, conversation rooms, etc.
Whereas the whole upper floor is intended for housing in spacious Museums
the available religious symbols, statues and paintings that illustrate the pro-
gress of religions in all nations and at all times.

A gold bronze statue of Peace will surmount the dome, and the statues
of the great teachers of religion from all countries will be placed upon the
columns that decorate the exterior.

In the endeavour to complete the whole conception of this world-embra-
cing centre upon the strongest lines of human necessities, it is evident that
an international Court of Justice could not be omitted.

The fact that so many beneficial international interests are already defi-
nitely organised and recognised as necessary to progress, and that manv
separate institutions, situated in different parts of the world, are internatio-
nally administered, points strongly to the advisability that the decision of
controversial questions between them come under an international head.

Yet, it may be said that there has never been a general and concrete
plan formulated by the governments to deal with the ever growing develop-
ment of international organisms, either to protect their rights or to facilitate
their just causes. Nevertheless all nations, directly and indirectly, benefit
by their existence. Without a definite plan uniting their highest endeavours,
centralising and studying their motives, it is hardly possible to obtain the
full benefit of these international bodies or to formulate just laws to protect
them.

Indeed the necessity of developing international laws for the rightful
administration of the manifold interests that equally affect the progress of
all nations, becomes more and more evident as being one of the most vital
obligations for the prosperity as well as for the peace of the future.

Lawo based upon a world community of interests will ever be sought for
in the future development of science and culture, industry and transporta-
tion, and should not the whole be administered by the governments in
unison, since the benefits realised are of use to them all ?

A common centre, upon neutral ground, established to supply this
increasingly vital demand, far from hindering, would undoubtedly develop
the personality of states by facilitating their intercourse, their industries,
their commerce and their social progress. Laws to protect these, could not