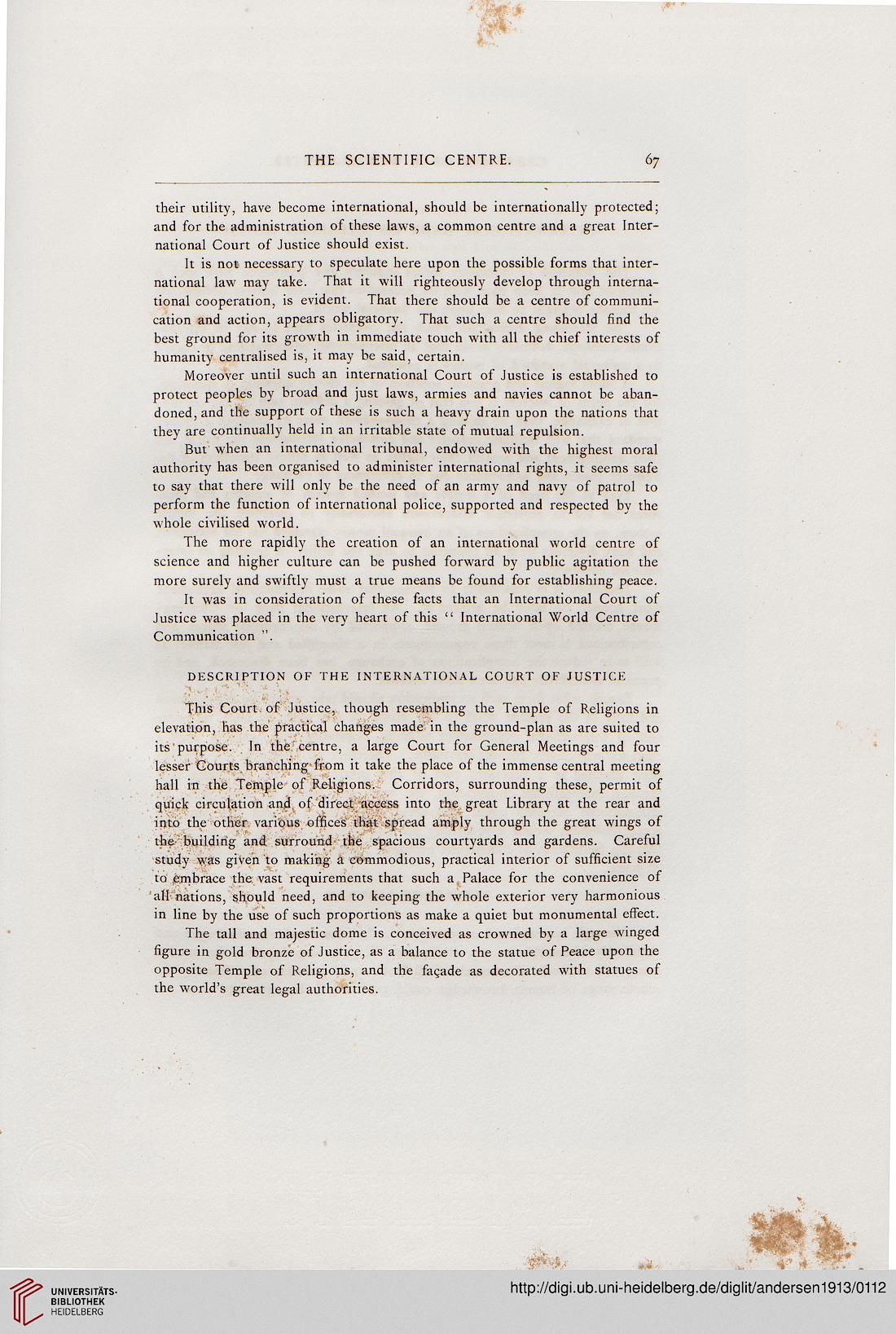 their utility, have become international, should be internationally protected;
and for the administration of these laws, a common centre and a great Inter-
national Court of Justice should exist.

It is not necessary to speculate here upon the possible forms that inter-
national law may take. That it will righteously develop through interna-
tional cooperation, is evident. That there should be a centre of communi-
cation and action, appears obligatory. That such a centre should find the
best ground for its growth in immediate touch with all the chief interests of
humanity centralised is, it may be said, certain.

Moreover until such an international Court of Justice is established to
protect peoples by broad and just laws, armies and navies cannot be aban-
doned, and the support of these is such a heavy drain upon the nations that
they are continually held in an irritable state of mutual repulsion.

But when an international tribunal, endowed with the highest moral
authority has been organised to administer international rights, it seems safe
to say that there will only be the need of an army and navy of patrol to
perform the function of international police, supported and respected by the
whole civilised world.

The more rapidly the creation of an international world centre of
science and higher culture can be pushed forward by public agitation the
more surely and swiftly must a true means be found for establishing peace.

It was in consideration of these facts that an International Court of
Justice was placed in the very heart of this " International World Centre of
Communication ".

DESCRIPTION OF THE INTERNATIONAL COURT OF JUSTICE

This Court of Justice, though resembling the Temple of Religions in
elevation, has the practical changes made in the ground-plan as are suited to
its purpose. In the centre, a large Court for General Meetings and four
lesser Courts branching from it take the place of the immense central meeting
hall in the Temple of Religions. Corridors, surrounding these, permit of
quick circulation and of direct access into the great Library at the rear and
into the other various offices that spread amply through the great wings of
the building and surround the spacious courtyards and gardens. Careful
study was given to making a commodious, practical interior of sufficient size
to embrace the vast requirements that such a Palace for the convenience of
all nations, should need, and to keeping the whole exterior very harmonious
in line by the use of such proportions as make a quiet but monumental effect.

The tall and majestic dome is conceived as crowned by a large winged
figure in gold bronze of Justice, as a balance to the statue of Peace upon the
opposite Temple of Religions, and the fagade as decorated with statues of
the world's great legal authorities.