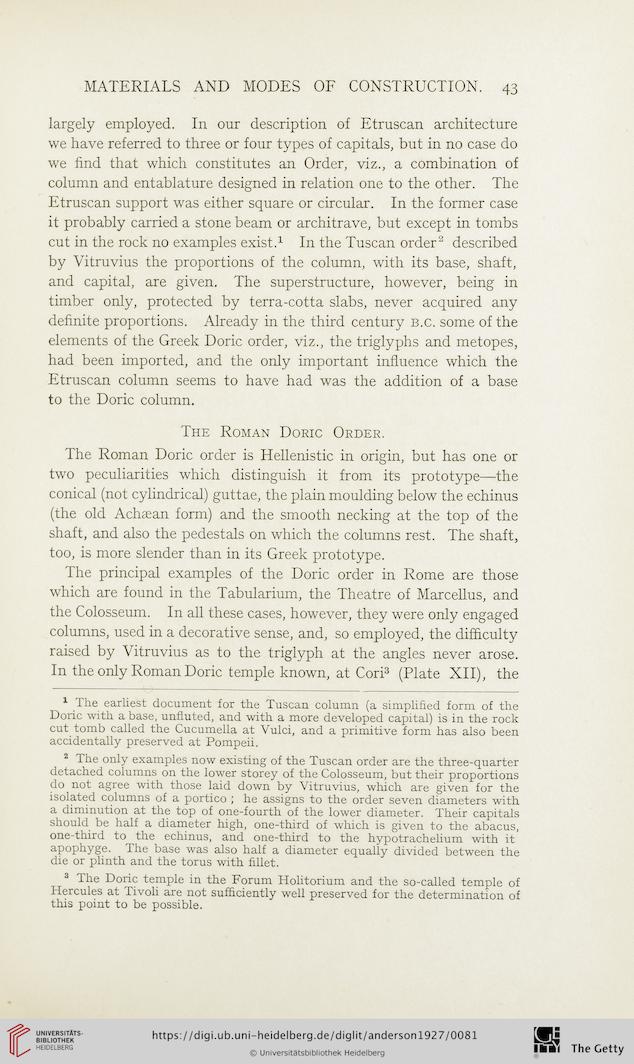 Information about OCR text
MATERIALS AND MODES OF CONSTRUCTION. 43

largely employed. In our description of Etruscan architecture
we have referred to three or four types of capitals, but in no case do
we find that which constitutes an Order, viz., a combination of
column and entablature designed in relation one to the other. The
Etruscan support was either square or circular. In the former case
it probably carried a stone beam or architrave, but except in tombs
cut in the rock no examples exist.1 In the Tuscan order2 described
by Vitruvius the proportions of the column, with its base, shaft,
and capital, are given. The superstructure, however, being in
timber only, protected by terra-cotta slabs, never acquired any
definite proportions. Already in the third century b.c. some of the
elements of the Greek Doric order, viz., the triglyphs and metopes,
had been imported, and the only important influence which the
Etruscan column seems to have had was the addition of a base
to the Doric column.
The Roman Doric Order.
The Roman Doric order is Hellenistic in origin, but has one or
two peculiarities which distinguish it from its prototype—the
conical (not cylindrical) guttae, the plain moulding below the echinus
(the old Achaean form) and the smooth necking at the top of the
shaft, and also the pedestals on which the columns rest. The shaft,
too, is more slender than in its Greek prototype.
The principal examples of the Doric order in Rome are those
which are found in the Tabularium, the Theatre of Marcellus, and
the Colosseum. In all these cases, however, they were only engaged
columns, used in a decorative sense, and, so employed, the difficulty
raised by Vitruvius as to the triglyph at the angles never arose.
In the only Roman Doric temple known, at Cori3 (Plate XII), the

1 The earliest document for the Tuscan, column (a simplified form of the
Doric with a base, unfluted, and with a more developed capital) is in the rock
cut tomb called the Cucumella at Vulci, and a primitive form has also been
accidentally preserved at Pompeii.
2 The only examples now existing of the Tuscan order are the three-quarter
detached columns on the lower storey of the Colosseum, but their proportions
do not agree with those laid down by Vitruvius, which are given for the
isolated columns of a portico ; he assigns to the order seven diameters with
a diminution at the top of one-fourth of the lower diameter. Their capitals
should be half a diameter high, one-third of which is given to the abacus,
one-third to the echinus, and one-third to the hypotrachelium with it
apophyge. The base was also half a diameter equally divided between the
die or plinth and the torus with fillet.
3 The Doric temple in the Forum Holitorium and the so-called temple of
Hercules at Tivoli are not sufficiently well preserved for the determination of
this point to be possible.