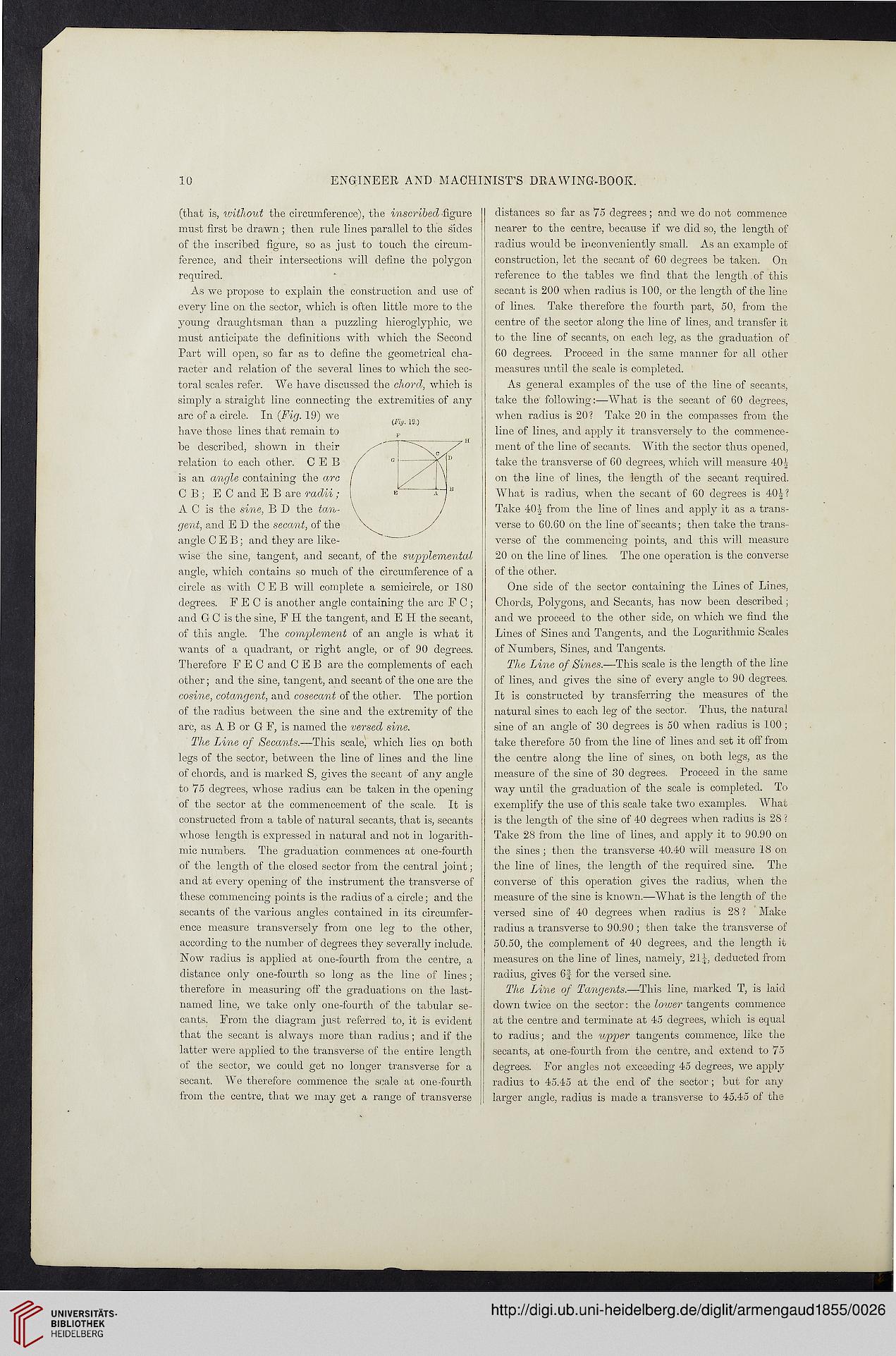 As we propose to explain the construction and use of
every line on the sector, which is often little more to the
young draughtsman than a puzzling hieroglyphic, we
must anticipate the definitions with which the Second
Part will open, so far as to define the geometrical cha-
racter and relation of the several lines to which the sec-
toral scales refer. We have discussed the chord, which is
simply a straight line connecting the extremities of any
arc of a circle. In {Fig. 19) we
have those lines that remain to
be described, shown in their
relation to each other. CEB
is an angle containing the arc
C B ; EC and E B are radii ;

A C is the sine, B D the tan-
gent, and E D the secant, of the
angle CEB; and they are like-
wise the sine, tangent, and secant, of the supplemental
angle, which contains so much of the circumference of a
circle as with CEB will complete a semicircle, or 180
degrees. F E C is another angle containing the arc F C ;
and G C is the sine, F H the tangent, and E H the secant,
of this angle. The complement of an angle is what it
wants of a quadrant, or right angle, or of 90 degrees.
Therefore F E C and CEB are the complements of each
other; and the sine, tangent, and secant of the one are the
cosine, cotangent, and cosecant of the other. The portion
of the radius between the sine and the extremity of the
arc, as A B or G F, is named the versed sine.

The Line of Secants.—This scale, which lies on both
legs of the sector, between the line of lines and the line
of chords, and is marked S, gives the secant of any angle
to 75 degrees, whose radius can be taken in the opening
of the sector at the commencement of the scale. It is
constructed from a table of natural secants, that is, secants
whose length is expressed in natural and not in logarith-
mic numbers. The graduation commences at one-fourth
of the length of the closed sector from the central joint;
and at every opening of the instrument the transverse of
these commencing points is the radius of a circle; and the
secants of the various angles contained in its circumfer-
ence measure transversely from one leg to the other,
according to the number of degrees they severally include.
Now radius is applied at one-fourth from the centre, a
distance only one-fourth so long as the line of lines;
therefore in measuring off the graduations on the last-
named line, we take only one-fourth of the tabular se-
cants. From the diagram just referred to, it is evident
that the secant is always more than radius ; and if the
latter were applied to the transverse of the entire length
of the sector, we could get no longer transverse for a
secant. We therefore commence the scale at one-fourth
from the centre, that we may get a range of transverse

distances so far as 75 degrees; and we do not commence
nearer to the centre, because if we did so, the length of
radius would be inconveniently small. As an example of
construction, let the secant of 60 degrees be taken. On
reference to the tables we find that the length. of this
secant is 200 when radius is 100, or the length of the line
of lines. Take therefore the fourth part, 50, from the
centre of the sector along the line of lines, and transfer it
to the line of secants, on each leg, as the graduation of
60 degrees. Proceed in the same manner for all other
measures until the scale is completed.

One side of the sector containing the Lines of Lines,
Chords, Polygons, and Secants, has now been described;
and we proceed to the other side, on which we find the
Lines of Sines and Tangents, and the Logarithmic Scales
of Numbers, Sines, and Tangents.

The Line of Tangents.—This line, marked T, is laid
down twice on the sector: the lower tangents commence
at the centre and terminate at 45 degrees, which is equal
to radius; and the upper tangents commence, like the
secants, at one-fourth from the centre, and extend to 75
degrees. For angles not exceeding 45 degrees, we apply
radius to 45.45 at the end of the sector ; but for any
larger angle, radius is made a transverse to 45.45 of the