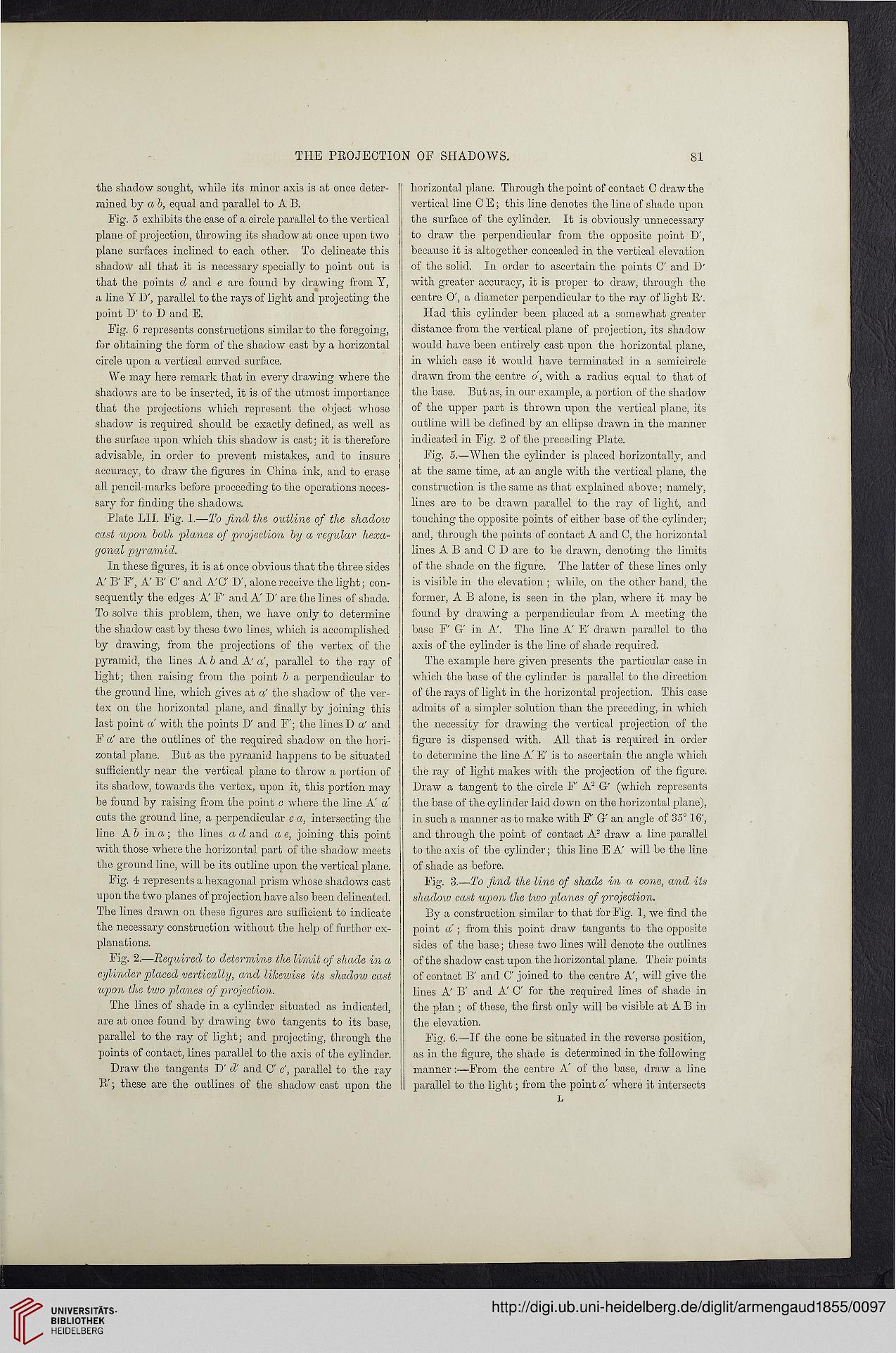 Information about OCR text
THE PROJECTION OF SHADOWS.

the shadow sought, while its minor axis is at once deter-
mined by a b, equal and parallel to A B.

Fig. 5 exhibits the case of a circle parallel to the vertical
plane of projection, throwing its shadow at once upon two
plane surfaces inclined to each other. To delineate this
shadow all that it is necessary specially to point out is
that the points cl and e are found by drawing from Y,
a line Y IT, parallel to the rays of light and projecting the
point D' to D and E.

Fig. 6 represents constructions similar to the foregoing,
for obtaining the form of the shadow cast by a horizontal
circle upon a vertical curved surface.

We may here remark that in every drawing where the
shadows are to be inserted, it is of the utmost importance
that the projections which represent the object whose
shadow is required should be exactly defined, as well as
the surface upon which this shadow is cast; it is therefore
advisable, in order to prevent mistakes, and to insure
accuracy, to draw the figures in China ink, and to erase
all pencil-marks before proceeding to the operations neces-
sary for finding the shadows.

Plate LII. Fig. 1.—To find the outline of the shadoiv
cast upon both planes of projection by a regular hexa-
gonal pyramid.

In these figures, it is at once obvious that the three sides
A' B' F', A' B' C' and A'C' D', alone receive the light; con-
sequently the edges A' F' and A D' are the lines of shade.
To solve this problem, then, we have only to determine
the shadow cast by these two lines, which is accomplished
by drawing, from the projections of the vertex of the
pyramid, the lines A b and A' a', parallel to the ray of
light; then raising from the point b a perpendicular to
the ground line, which gives at a' the shadow of the ver-
tex on the horizontal plane, and finally by joining this
last point a with the points D' and F'; the lines D a" and
F a' are the outlines of the required shadow on the hori-
zontal plane. But as the pyramid happens to be situated
sufficiently near the vertical plane to throw a portion of
its shadow, towards the vertex, upon it, this portion may
be found by raising from the point c where the line A' a
cuts the ground line, a perpendicular c a, intersecting the
line A b in a ; the lines a d and a e, joining this point
with those where the horizontal part of the shadow meets
the ground line, will be its outline upon the vertical plane.

Fig. 4 represents a hexagonal prism whose shadows cast
upon the two planes of projection have also been delineated.
The lines drawn on these figures are sufficient to indicate
the necessary construction without the help of further ex-
planations.

Fig. 2.—Required to determine the limit of shade in a
cylinder placed vertically, and likewise its shadow cast
upon the tivo planes of projection.

The lines of shade in a cylinder situated as indicated,
are at once found by drawing two tangents to its base,
parallel to the ray of light; and projecting, through the
points of contact, lines parallel to the axis of the cylinder.

Draw the tangents D'd' and C' c', parallel to the ray
Pd; these are the outlines of the shadow cast upon the

horizontal plane. Through the point of contact C draw the
vertical line C E; this line denotes the line of shade upon
the surface of the cylinder. It is obviously unnecessary
to draw the perpendicular from the opposite point D',
because it is altogether concealed in the vertical elevation
of the solid. In order to ascertain the points C' and D'
with greater accuracy, it is proper to draw, through the
centre O', a diameter perpendicular to the ray of light R'.

Had this cylinder been placed at a somewhat greater
distance from the vertical plane of projection, its shadow
would have been entirely cast upon the horizontal plane,
in which case it would have terminated in a semicircle
drawn from the centre o', with a radius equal to that of
the base. But as, in our example, a portion of the shadow
of the upper part is thrown upon the vertical plane, its
outline will be defined by an ellipse drawn in the manner
indicated in Fig. 2 of the preceding Plate.

Fig. 5.—When the cylinder is placed horizontally, and
at the same time, at an angle with the vertical plane, the
construction is the same as that explained above; namely,
lines are to be drawn parallel to the ray of light, and
touching the opposite points of either base of the cylinder;
and, through the points of contact A and C, the horizontal
lines A B and C D are to be drawn, denoting the limits
of the shade on the figure. The latter of these lines only
is visible in the elevation ; while, on the other hand, the
former, A B alone, is seen in the plan, where it may be
found by drawing a perpendicular from A meeting the
base F' G' in A'. The line A E' drawn parallel to the
axis of the cylinder is the line of shade required.

The example here given presents the particular case in
which the base of the cylinder is parallel to the direction
of the rays of light in the horizontal projection. This case
admits of a simpler solution than the preceding, in which
the necessity for drawing the vertical projection of the
figure is dispensed with. All that is required in order
to determine the line A' E' is to ascertain the angle which
the ray of light makes with the projection of the figure.
Draw a tangent to the circle F' A2 G' (which represents
the base of the cylinder laid down on the horizontal plane),
in such a manner as to make with F' G' an angle of 35° 16',
and through the point of contact A2 draw a line parallel
to the axis of the cylinder; this line E A will be the line
of shade as before.

Fig. 3.—To find the line of shade in a cone, and its
shado w cast upon the two planes of projection.

By a construction similar to that for Fig. 1, we find the
point a ; from this point draw tangents to the opposite
sides of the base; these two lines will denote the outlines
of the shadow cast upon the horizontal plane. Their points
of contact B' and C' joined to the centre A', will give the
lines A B' and A C' for the required lines of shade in
the plan ; of these, the first only will be visible at A B in
the elevation.

Fig. 6.—If the cone be situated in the reverse position,
as in the figure, the shade is determined in the following
manner:—From the centre A' of the base, draw a line
parallel to the light; from the point a where it intersects