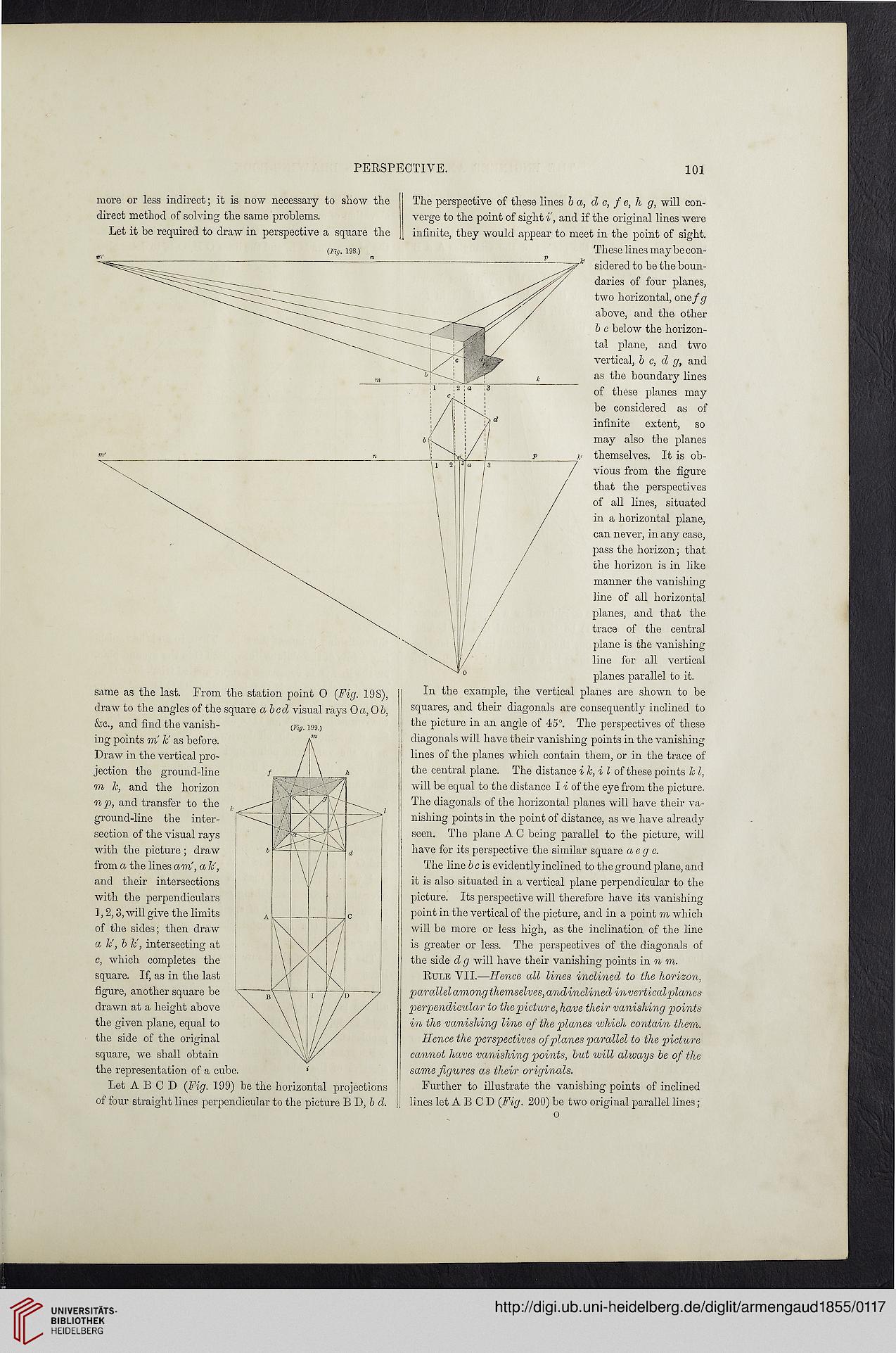 more or less indirect; it is now necessary to show the
direct method of solving the same problems.

Let it be required to draw in perspective a square the

Draw in the vertical pro-
jection the ground-line
m k, and the horizon
np, and transfer to the
ground-line the inter-
section of the visual rays
with the picture ; draw
from a the lines am', a k',
and their intersections
with the perpendiculars
1,2,8, will give the limits
of the sides; then draw
a k', b k', intersecting at
c, which completes the
square. If, as in the last
figure, another square be
drawn at a height above
the given plane, equal to
the side of the original
square, we shall obtain
the representation of a cube. *

Let A B C D (Fig. 199) be the horizontal projections
of four straight lines perpendicular to the picture B D, b d.

These lines maybe con-
sidered to be the boun-
daries of four planes,
two horizontal, onefg
above, and the other
b c below the horizon-
tal plane, and two
vertical, b c, d g, and
as the boundary lines
of these planes may
be considered as of
infinite extent, so
may also the planes
themselves. It is ob-
vious from the figure
that the perspectives
of all lines, situated
in a horizontal plane,
can never, in any case,
pass the horizon; that
the horizon is in like
manner the vanishing
line of all horizontal
planes, and that the
trace of the centra]
plane is the vanishing
line for all vertical
planes parallel to it.

In the example, the vertical planes are shown to be
squares, and their diagonals are consequently inclined to
the picture in an angle of 45°. The perspectives of these
diagonals will have their vanishing points in the vanishing
lines of the planes which contain them, or in the trace of
the central plane. The distance ik,il of these points k l,
will be equal to the distance I i of the eye from the picture.
The diagonals of the horizontal planes will have their va-
nishing points in the point of distance, as we have already
seen. The plane A C being parallel to the picture, will
have for its perspective the similar square aeg c.

The line b c is evidently inclined to the ground plane, and
it is also situated in a vertical plane perpendicular to the
picture. Its perspective will therefore have its vanishing
point in the vertical of the picture, and in a point m which
will be more or less high, as the inclination of the line
is greater or less. The perspectives of the diagonals of
the side d g will have their vanishing points in n m.

Rule VII.—Hence all lines inclined to the horizon,
parallel among themselves, andinclined invertical planes
perpendicular to the picture, have their vanishing points
in the vanishing line of the planes which contain them.

Hence the perspectives of planes parallel to the picture
cannot have vanishing points, but will always be of the
same figures as their originals.

Further to illustrate the vanishing points of inclined