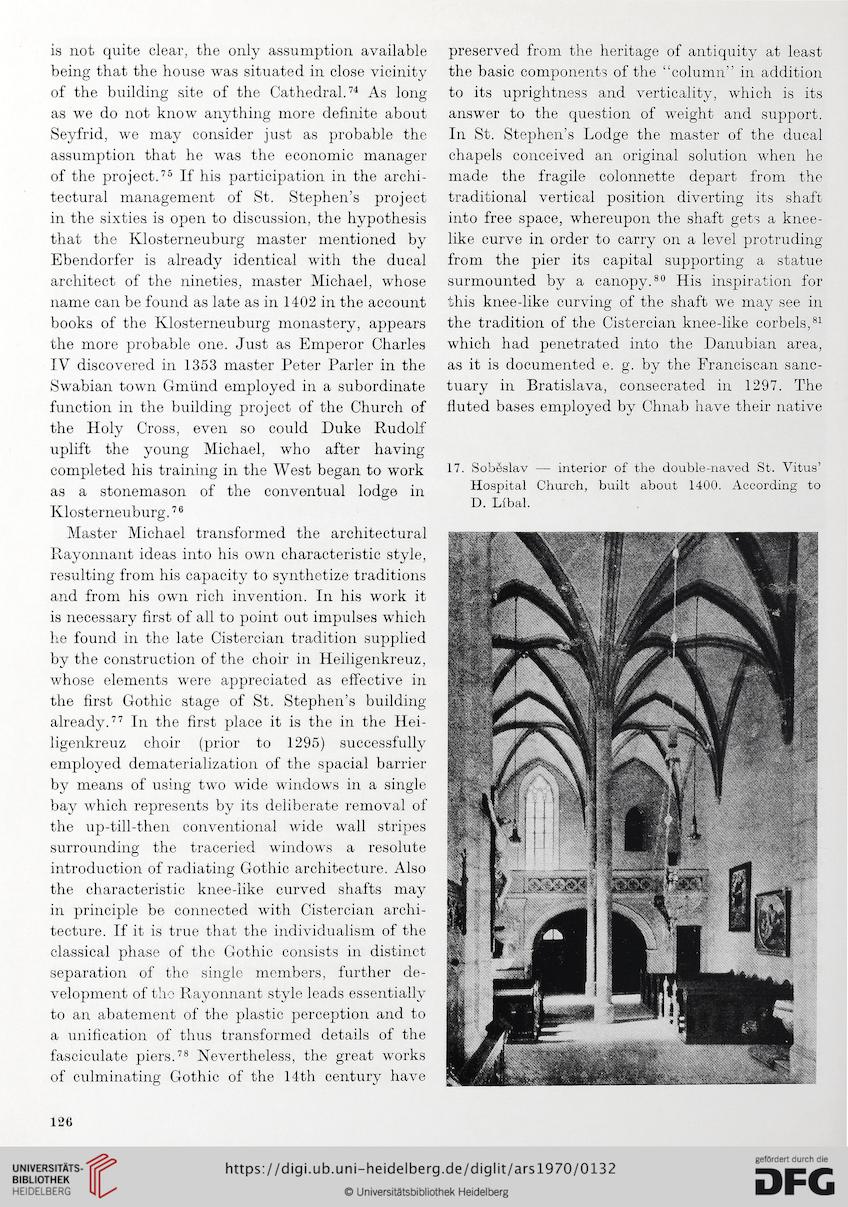 Information about OCR text
is not quite clear, the only assumption available
being that the house was situated in close vicinity
of the building site of the Cathédral.74 As long
as we do not know anything more definite about
Seyfrid, we may consider just as probable the
assumption that he was the économie manager
of the project.75 If his participation in the archi-
tectural management of St. Stephen’s project
in the sixties is open to discussion, the hypothesis
that the Klosterneuburg master mentioned by
Ebendorfer is already identical with the ducal
architect of the nineties, master Michael, whose
name can be found as late as in 1402 in the account
books of the Klosterneuburg monastery, appears
the more probable one. Just as Emperor Charles
IV discovered in 1353 master Peter Parier in the
Swabian town Gmünd employed in a subordinate
function in the building project of the Church of
the Holy Cross, even so could Duke Rudolf
uplift the young Michael, who after having
completed his training in the West began to work
as a stonemason of the conventual lodge in
Klosterneuburg.7 6
Master Michael transformed the architectural
Rayonnant ideas into his own characteristic style,
resulting from his capacity to synthetize traditions
and from his own rieh invention. In his work it
is necessary first of all to point out impulses which
he found in the late Cistercian tradition supplied
by the construction of the choir in Heiligenkreuz,
whose éléments were appreciated as effective in
the first Gothic stage of St. Stephen’s building
already.77 In the first place it is the in the Hei-
ligenkreuz choir (prior to 1295) successfully
employed dematerialization of the spacial barrier
by means of using two wide Windows in a single
bay which represents by its deliberate removal of
the up-till-then conventional wide wall stripes
surrounding the traceried Windows a resolute
introduction of radiating Gothic architecture. Also
the characteristic knee-like curved shafts may
in principle be connected with Cistercian archi-
tecture. If it is true that the individualism of the
classical phase of the Gothic consists in distinct
séparation of the single members, further de-
velopment of the Rayonnant style leads essentially
to an abatement of the plastic perception and to
a unification of thus transformed details of the
fasciculate piers.78 Nevertheless, the great works
of culminating Gothic of the 14th Century have

preserved from the héritage of antiquity at least
the basic components of the “column” in addition
to its uprightness and verticality, which is its
answer to the question of weight and support.
In St. Stephen’s Lodge the master of the ducal
chapels conceived an original solution when he
made the fragile colonnette départ from the
traditional vertical position diverting its shaft
into free space, whereupon the shaft gets a knee-
like curve in order to carry on a level protruding
from the pier its capital supporting a statue
surmounted by a canopy.80 His inspiration for
this knee-like curving of the shaft we may see in
the tradition of the Cistercian knee-like corbels,81
which had penetrated into the Danubian area,
as it is documented e. g. by the Franciscan sanc-
tuary in Bratislava, consecrated in 1297. The
fluted bases employed by Chnab have their native

17. Soběslav — interior of the double-naved St. Vitus’
Hospital Church, built about 1400. According to
D. Líbal.