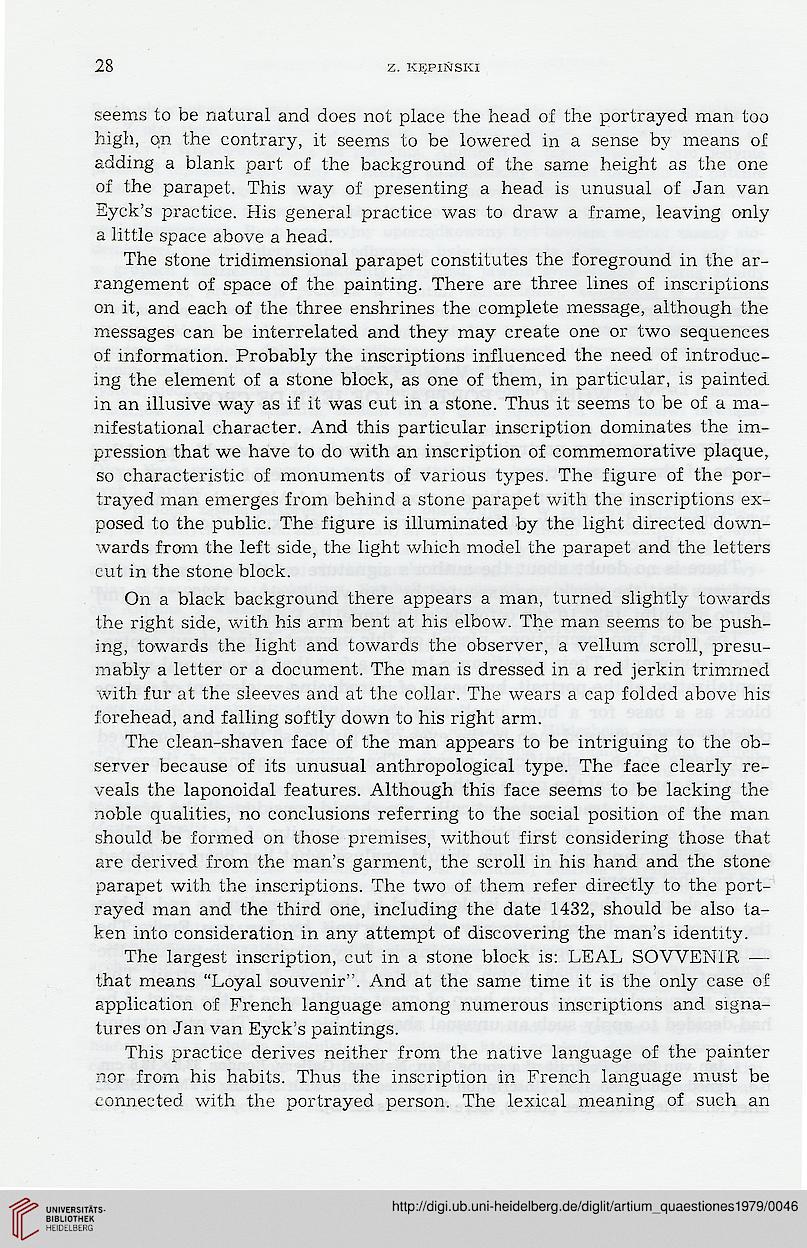 seems to be natural and does not place the head of the portrayed man too
high, on the contrary, it seems to be lowered in a sense by means of
adding a blank part of the background of the same height as the one
of the parapet. This way of presenting a head is unusual of Jan van
Eyck’s practice. His generał practice was to draw a frame, leaving only
a little space above a head.

The stone tridimensional parapet constitutes the foreground in the ar-
rangement of space of the painting. There are three lines of inscriptions
on it, and each of the three enshrines the complete message, although the
messages can be interrelated and they may create one or two seąuences
of information. Probably the inscriptions influenced the need of introduc-
ing the element of a stone błock, as one of them, in particular, is painted
in an illusive way as if it was cut in a stone. Thus it seems to be of a ma-
nifestational character. And this particular inscription dominates the im-
pression that we have to do with an inscription of commemorative plaąue,
so characteristic of monuments of various types. The figurę of the por-
trayed man emerges from behind a stone parapet with the inscriptions ex-
posed to the public. The figurę is illuminated by the light directed down-
wards from the left side, the light which model the parapet and the letters
cut in the stone błock.

On a black background there appears a man, turned sligbtly towards
the right side, with his arm bent at his elbow. The man seems to be push-
jng, towards the light and towards the observer, a vellum scroll, presu-
mably a letter or a document. The man is dressed in a red jerkin trimmed
with fur at the sleeves and at the colłar. The wears a cap folded above his
forehead, and falling softly down to his right arm.

The cłean-shaven face of the man appears to be intriguing to the ob-
server because of its unusual anthropological type. The face clearly re-
veals the laponoidal features. Although this face seems to be lacking the
noble ąualities, no conclusions referring to the social position of the man
should be formed on those premises, without first considering those that
are derived from the man’s garment, the scroll in his hand and the stone
parapet with the inscriptions. The two of them refer directly to the port-
rayed man and the third one, including the datę 1432, should be also ta-
ken into consideration in any attempt of discovering the man’s identity.

The largest inscription, cut in a stone błock is: LEAL SOWEN1R —
that means “Loyal souvenir”. And at the same time it is the only case of
application of French language among numerous inscriptions and signa-
tures on Jan van Eyck’s paintings.

This practice derives neither from the native language of the painter
nor from his habits. Thus the inscription in French language must be
connected with the portrayed person. The lexicał meaning of such an