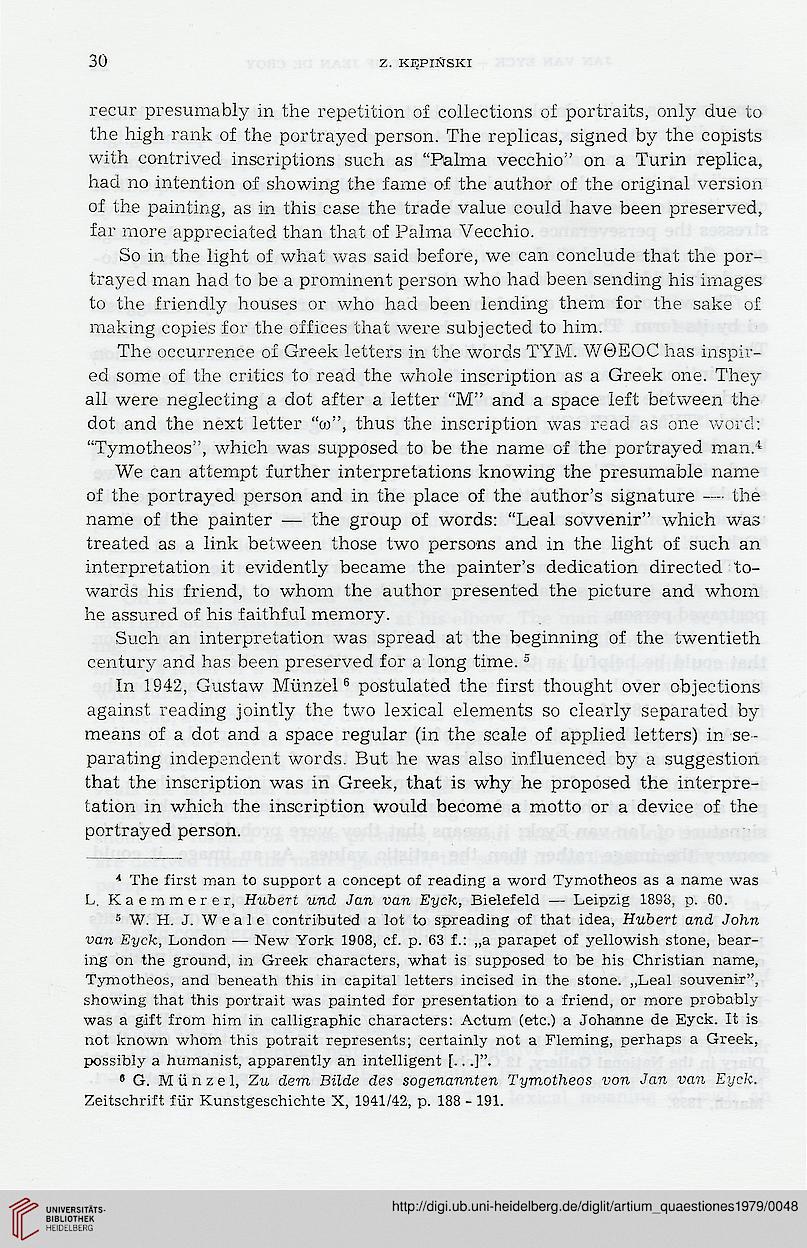 recur presumably in the repetition of collections of portraits, only due to
the high rank of the portrayed person. The replicas, signed by the eopists
with contrived inscriptions such as “Palma vecchio” on a Turin replica,
had no intention of showing the famę of the author of the original version
of the painting, as in this case the trade value eould have been preserved,
far morę appreciated than that of Palma Vecchio.

So in the light of what was said before, we can conclude that the por-
trayed man had to be a prominent person who had been sending his irnages
to the friendly houses or who had been iending them for the sake of
making eopies for the offices that were subjected to him.

The occurrence of Greek letters in the words TYM. W0EOC has inspir-
ed some of the critics to read the whole inscription as a Greek one. They
ail were neglecting a dot after a letter “M” and a space left between the
dot and the next letter “03”, thus the inscription was read as one word:
“Tymotheos”, which was supposed to be the name of the portrayed man.* 4

We can attempt further interpretations knowing the presumable name
of the portrayed person and in the place of the author’s signature — the
name of the painter — the group of words: “Leal sowenir” which was
treated as a link between those two persons and in the light of such an
interpretation it evidently became the painter’s dedication directed to-
wards his friend, to whom the author presented the picture and whom
he assured of his faithful memory.

Such an interpretation was spread at the beginning of the twentieth
century and has been preserved for a long time. 5

In 1942, Gustaw Miinzel6 * 8 postulated the first thought over objections
against reading jointly the two lexical elements so clearly separated by
means of a dot and a space regular (in the scalę of applied letters) in se-
parating independent words. But he was ałso influenced by a suggestion
that the inscription was in Greek, that is why he proposed the interpre-
tation in which the inscription would become a motto or a device of the
portrayed person.

van Eyck, London — New York 1908, cf. p. 63 f.: „a parapet of yellowish stone, bear-
ing on the ground, in Greek characters, what is supposed to be his Christian name,

Tymotheos, and beneath this in Capital letters incised in the stone. „Leal souvenir”,
showing that this portrait was painted for presentation to a friend, or morę probably
was a gift from him in calligraphic characters: Actum (etc.) a Johanne de Eyck. It is
not known whom this potrait represents; certainly not a Fleming, perhaps a Greek,
possibly a humanist, apparently an intelligent [...]”.