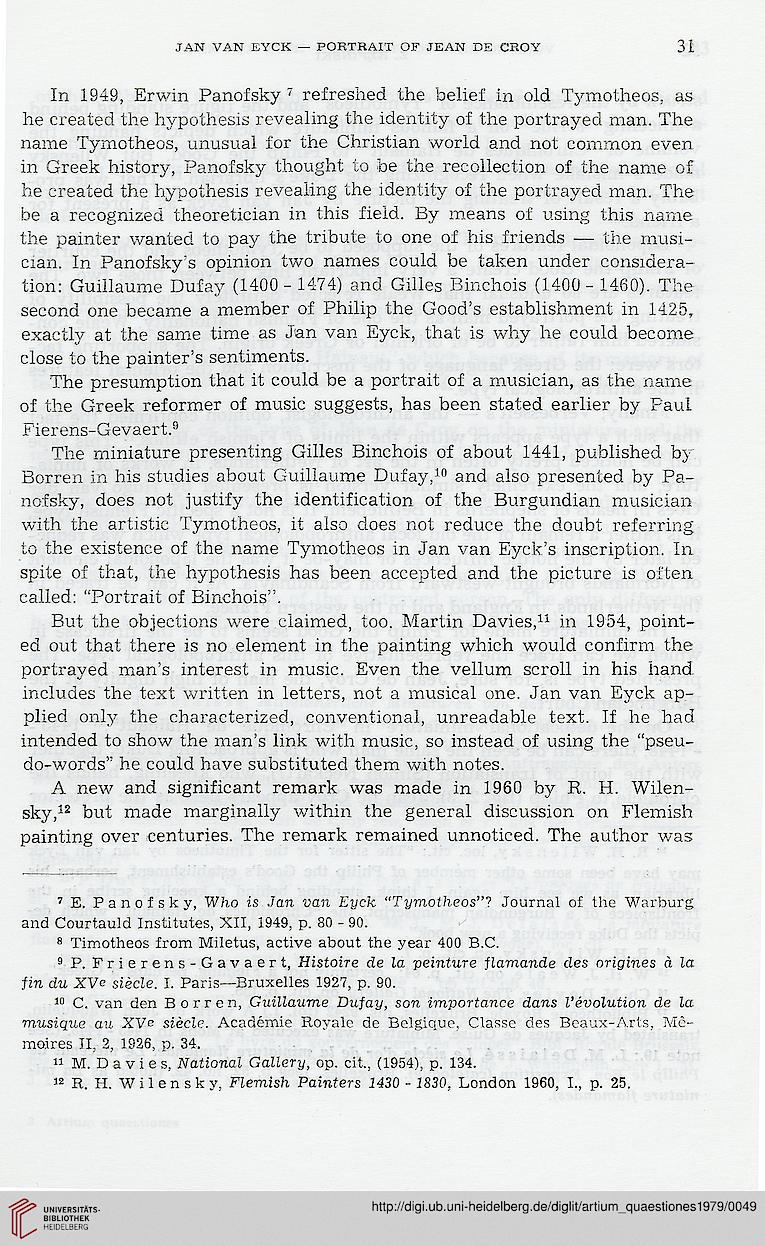 In 1949, Erwin Panofsky 7 refreshed the belief in oid Tymotheos, as
he created the hypothesis reveałing the identity of the portrayed man. The
name Tymotheos, unusual for the Christian world and not comrnon even
in Greek history, Panofsky thought to be the recollection of the name of
he created the hypothesis reveaiing the identity of the portrayed man. The
be a recognized theoretician in this field. By means of using this name
the painter wanted to pay the tribute to one of his friends — the musi-
cian. In Panofsky's opinion two names couid be taken under consiaera-
tion: Guillaume Dufay (1400 - 1474) and Gilles Binchois (1400 - 1460). The
second one became a member of Philip the Good’s establishment in 1425,
exactly at the same time as Jan van Eyck, that is why he couid become
close to the painter’s sentiments.

The presumption that it couid be a portrait of a musician, as the name
of the Greek reformer of musie suggests, has been stated earlier by Paul
Fierens-Gevaert.9

The miniaturę presenting Gilles Binchois of about 1441, published by
Borren in his studies about Guillaume Dufay,10 and also presented by Pa-
nofsky, does not justify the identification of the Burgundian musician
with the artistic Tymotheos, it also does not reduce the doubt referring
to the existence of the name Tymotheos in Jan van Eyckk inscription. In
spite of that, the hypothesis has been accepted and the picture is often
called: “Portrait of Binchois”.

But the objections were claimed, too. Martin Davies,n in 1954, point-
ed out that there is no element in the painting which would confirm the
portrayed mank interest in musie. Even the vełlum scroll in his hand
incluaes the text written in letters, not a musical one. Jan van Eyck ap-
plied only the characterized, conventional, unreadable text. If he had
intended to show the mank link with musie, so instead of using the “pseu-
do-words” he couid have substituted them with notes.

A new and significant remark was madę in 1960 by R. H. Wilen-
sky,12 but madę marginally within the generał discussion on Flemish
painting over centuries. The remark remained unnoticed. The author was

8 Timotheos from Miletus, active about the year 400 B.C.