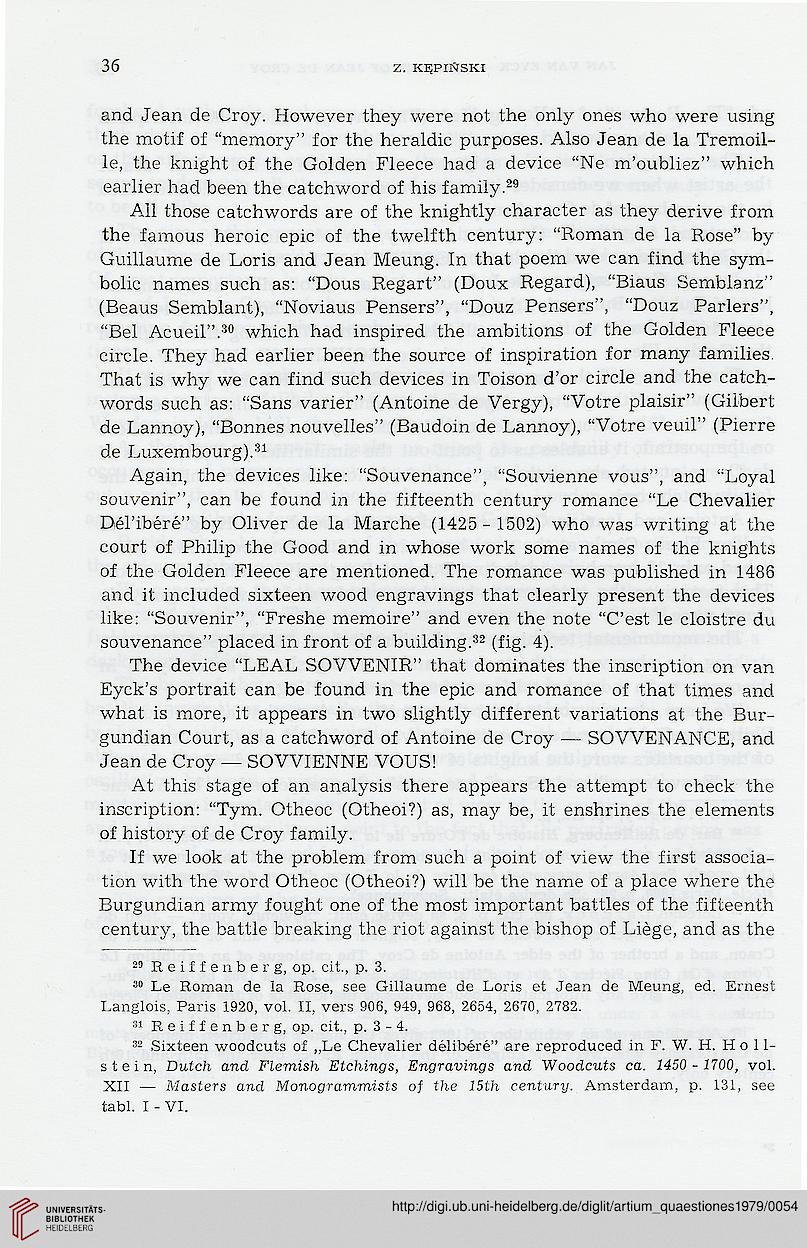 and Jean de Croy. However they were not the only ones who were using
the motif of “memory” for the heraldic purposes. Also Jean de la Tremoil-
le, the knight of the Golden Fleece had a device “Ne m’oubliez” which
earlier had been the catchword of his famiiy.29

Ali those catchwords are of the knightly character as they derive from
the famous heroic epic of the twelfth cen tury: “Roman de la Rosę” by
Guillaume de Loris and Jean Meung. In that poem we can find the sym-
bolic names such as: “Dous Regart” (Doux Regard), “Biaus Sembianz”
(Beaus Semblant), “Noviaus Pensers”, “Douz Pensers”, “Douz Parlers”,
“Bel Acueil”.30 which had inspired the ambitions of the Golden Fleece
circle. They had earlier been the source of inspiration for many families.
That is why we can find such devices in Toison d’or circle and the catch-
words such as: “Sans varier” (Antoine de Vergy), “Votre plaisir” (Gilbert
de Lannoy), “Bonnes nouvelies” (Baudoin de Lannoy), “Votre veuil” (Pierre
de Lu.xembourg).31

Again, the devices like: “Souvenance”, “Souvienne vous”, and “Loyal
souvenir”, can be found in the fifteenth century romance “Le Chevalier
DeFibere” by 01iver de la Marche (1425 - 1502) who was writing at the
court of Philip the Good and in whose work some names of the knights
of the Golden Fleece are mentioned. The romance was published in 1486
and it included sixteen wood engravings that clearly present the devices
like: “Souvenir”, “Freshe memoire” and even the notę “C’est le cloistre du
souvenance” placed in front of a building.32 (fig. 4).

The device “LEAL SOWENIR” that dominates the inscription on van
Eyck’s portrait can be found in the epic and romance of that times and
what is morę, it appears in two slightly different variations at the Bur-
gundian Court, as a catchword of Antoine de Croy — SOWENANCE, and
Jean de Croy — SOWIENNE VOUS!

At this stage of an analysis there appears the attempt to check the
inscription: “Tym. Otheoc (Otheoi?) as, may be, it enshrines the elements
of history of de Croy famiiy.

If we look at the problem from such a point of view the first associa-
tion with the word Otheoc (Otheoi?) will be the name of a place where the
Burgundian army fought one of the most important battles of the fifteenth
century, the battle breaking the riot against the bishop of Liege, and as the