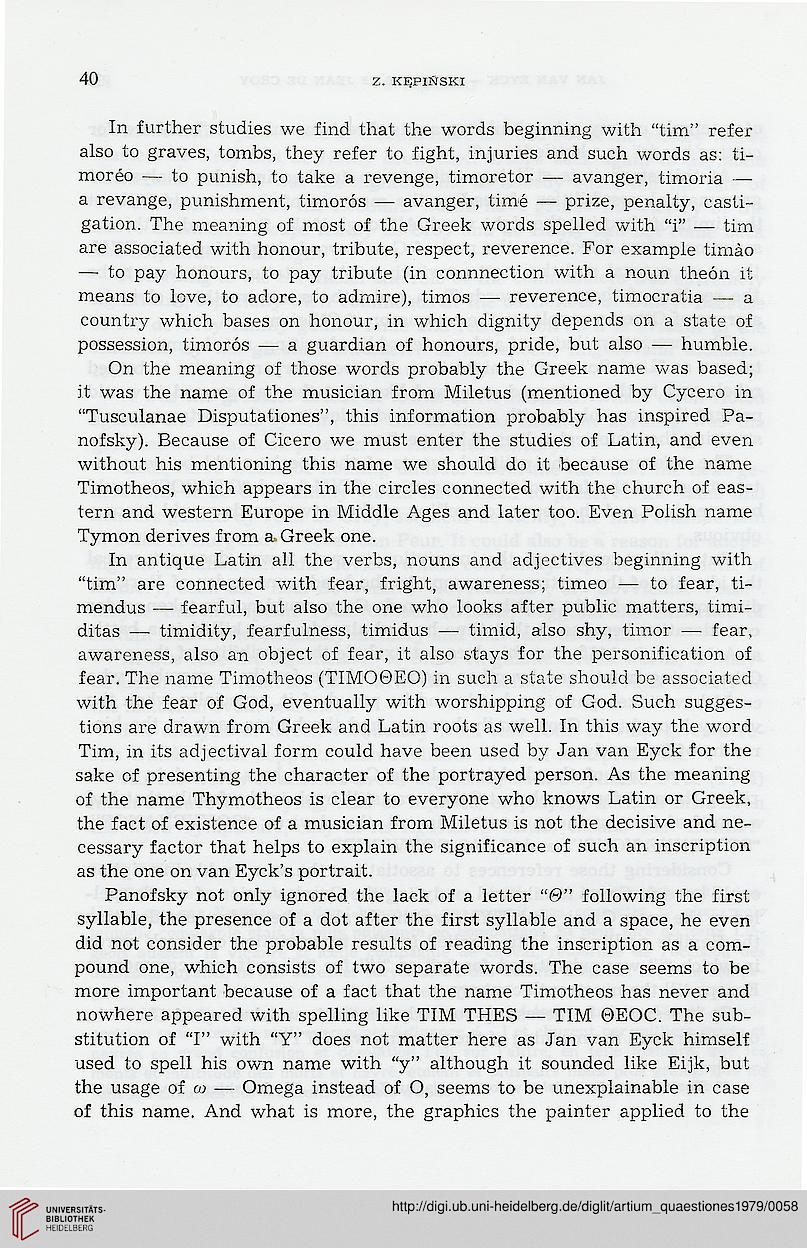 In further studies we find that the words beginning with “tim” refer
also to graves, tombs, they refer to fight, injuries and such words as: ti-
moreo — to punish, to take a revenge, timoretor — avanger, timoria —
a revange, punishment, timorós — avanger, time — prize, penalty, casti-
gation. The meaning of most of the Greek words spelled with “i” — tim
are associated with honour, tribute, respect, reverence. For example timao
— to pay honours, to pay tribute (in connnection with a noun theón it
means to lcve, to adore, to admire), timos — reverence, timocratia — a
country which bases on honour, in which dignity depends on a state of
possession, timorós — a guardian of honours, pride, but also — humble.

On the meaning of those words probably the Greek name was basea;
it was the name of the musician frorn Miletus (mentioned by Cycero in
“Tusculanae Disputationes”, this information probably has inspired Pa-
nofsky). Because of Cicero we must enter the studies of Latin, and even
without his mentioning this name we should do it because of the name
Timotheos, which appears in the circles connected with the church of eas-
tern and western Europę in Middle Ages and later too. Even Poiish name
Tymon derives from a Greek one.

In antiąue Latin all the verbs, nouns and adjectives beginning with
“tim” are connected with fear, fright, awareness; timeo — to fear, ti-
mendus — fearful, but also the one who looks after public matters, tirni-
ditas — timidity, fearfulness, timidus —• timid, also shy, timor — fear,
awareness, also an object of fear, it also stays for the personification of
fear. The name Timotheos (TIMO0EO) in such a state should be associated
with the fear of God, eventually with worshipping of God. Such sugges-
tions are drawn from Greek and Latin roots as well. In this way the word
Tim, in its adjectival form could have been used by Jan van Eyck for the
sake of presenting the character of the portrayed person. As the meaning
of the name Thymotheos is elear to everyone who knows Latin or Greek,
the fact of existence of a musician from Miletus is not the decisive and ne-
cessary factor that helps to explain the significance of such an inscription
as the one on van Eyck’s portrait.

Panofsky not only ignored. the lack of a letter “0” following the first
syllable, the presence of a dot after the first syllable and a space, he even
did not consider the probable results of reading the inscription as a com-
pound one, which consists of two separate words. The case seems to be
morę important because of a fact that the name Timotheos has never and
nowhere appeared with spelling like TIM THES — TIM 0EOC. The sub-
stitution of “I” with “Y” does not matter here as Jan van Eyck himself
used to spell his own name with “y” although it sounded like Eijk, but
the usage of co — Omega instead of O, seems to be unexplainable in case
of this name. And what is morę, the graphics the painter applied to the