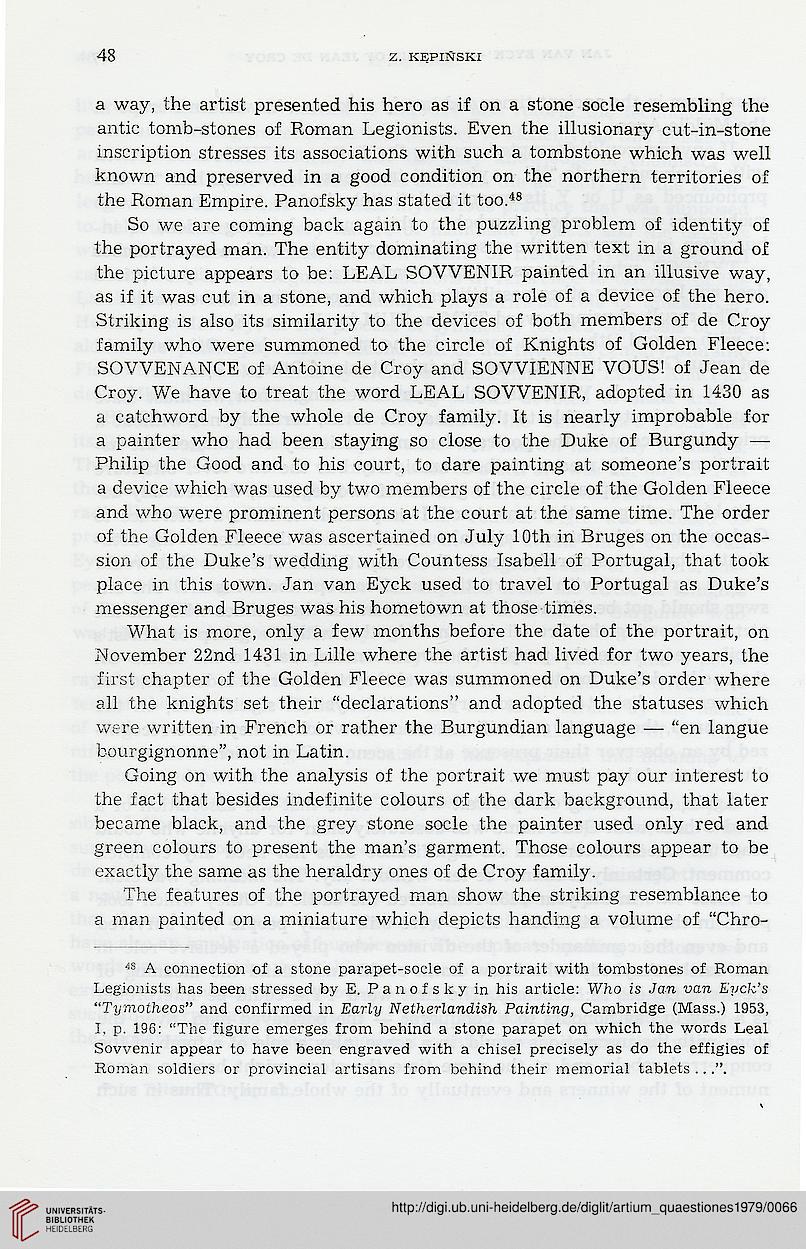 a way, the artist presented his hero as if on a stone socle resembling the
antic tomb-stones of Roman Legionists. Even the illusionary cut-in-stone
inscription stresses its associations with such a tombstone which was well
known and preserved in a good condition on the northern territories of
the Roman Empire. Panofsky has stated it too.48

So we are coming back again to the puzzling problem of identity of
the portrayed man. The entity dominating the written text in a ground of
the picture appears to be: LEAL SOWENIR painted in an illusive way,
as if it was cut in a stone, and which plays a role of a device of the hero.
Striking is also its similarity to the devices of both members of de Croy
family who were summoned to the circle of Knights of Golden Fleece:
SOWENANCE of Antoine de Croy and SOWIENNE VOUS! of Jean de
Croy. We have to treat the word LEAL SOWENIR, adopted in 1430 as
a catchword by the whole de Croy family. It is nearly improbable for
a painter who had been staying so close to the Duke of Burgundy —
Philip the Good and to his court, to dare painting at someone’s portrait
a bevice which was used by two members of the circle of the Golden Fleece
and who were prominent persons at the court at the same time. The order
of the Golden Fleece was ascertained on July lOth in Bruges on the occas-
sion of the Duke’s wedding with Countess Isabelł of Portugal, that took
place in this town. Jan van Eyck used to travel to Portugal as Duke’s
messenger and Bruges was his hometown at those-times.

What is morę, only a few months before the datę of the portrait, on
November 22nd 1431 in Lille where the artist had lived for two years, the
first chapter of the Golden Fleece was summoned on Duke’s order where
all the knights set their “declarations” and adopted the statuses which
were written in French or rather the Burgundian language — “en langue
bourgignonne”, not in Latin.

Going on with the analysis of the portrait we must pay our interest to
the fact that besides indefinite colours of the dark background, that later
became black, and the grey stone socle the painter used only red and
green colours to present the man’s garment. Those colours appear to be
exactly the same as the heraldry ones of de Croy family.

48 A connection of a stone parapet-socle of a portrait with tombstones of Roman
Legionists has been stressed by E. Panofsky in his article: Who is Jan van Eyck’s
“Tymotheos” and confirmed in Early Netherlandish Painting, Cambridge (Mass.) 1953,
I, p. 196: “The figurę emerges from behind a stone parapet on which the words Leal
Sowenir appear to have been engraved with a chisel precisely as do the effigies of
Roman soldiers or provineial artisans from behind their memoriał tablets ..