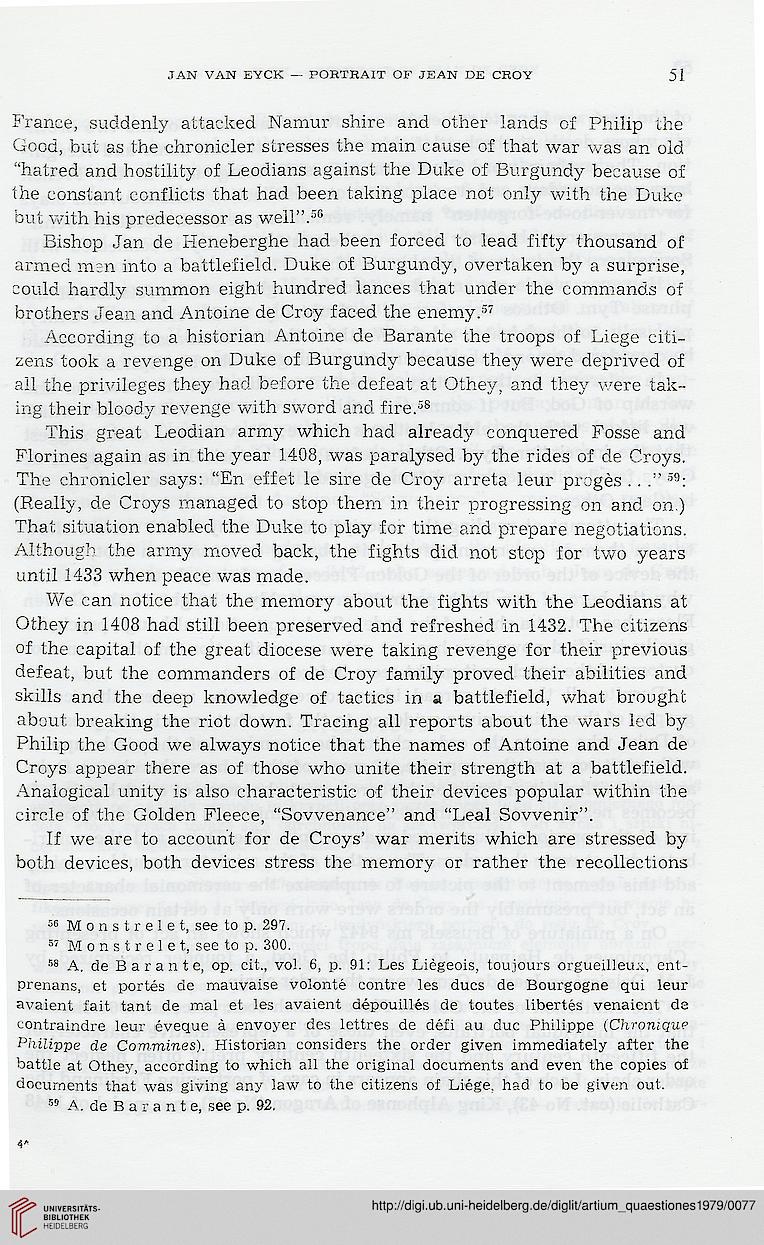 France, suddenly attacked Namur shire and other lands of Philip the
Good, but as the ehronicler stresses the main cause of that war was an old
“hatred and hostility of Leodians against the Duke of Burgundy because of
the constant conflicts that had been taking place not only with the Duke
but with his predecessor as weil”.56

Bishop Jan de Heneberghe had been forced to lead fifty thousand of
armed men into a battlefield. Duke of Burgundy, overtaken by a surprise,
could hardly summon eight hundred lances that under the eommands of
brothers Jean and Antoine de Croy faced the enemy.57

According to a historian Antoine de Barante the troops of Liege citi-
zens took a revenge on Duke of Burgundy because they were deprived of
all the privileges they had before the defeat at Othey, and they were tak-
ing their bloody revenge with sword and fire.58

This great Leodian army which had already conąuered Fosse and
Florines again as in the year 1408, was paralysed by the rides of de Croys.
The ehronicler says: “En effet le sire de Croy arreta leur proges . . 59:

(Really, de Croys managed to stop them in their progressing on and on.)
That situation enabled the Duke to play for time and prepare negotiations.
Although the army moved back, the fights did not stop for two years
until 1433 when peace was madę.

We can notice that the memory about the fights with the Leodians at
Othey in 1408 had still been preserved and refreshed in 1432. The citizens
of the Capital of the great diocese were taking revenge for their previous
defeat, but the commanders of de Croy family proved their abilities and
skills and the deep knowledge of tactics in a battlefield, what brought
about breaking the riot down. Tracing all reports about the wars led by
Philip the Good we always notice that the names of Antoine and Jean de
Croys appear there as of those who unitę their strength at a battlefield.
Analogical unity is also characteristic of their devices popular within the
circle of the Golden Fleece, “Sowenance” and “Leal Sowenir”.

If we are to account for de Croys’ war merits which are stressed by
both devices, both devices stress the memory or rather the recollections