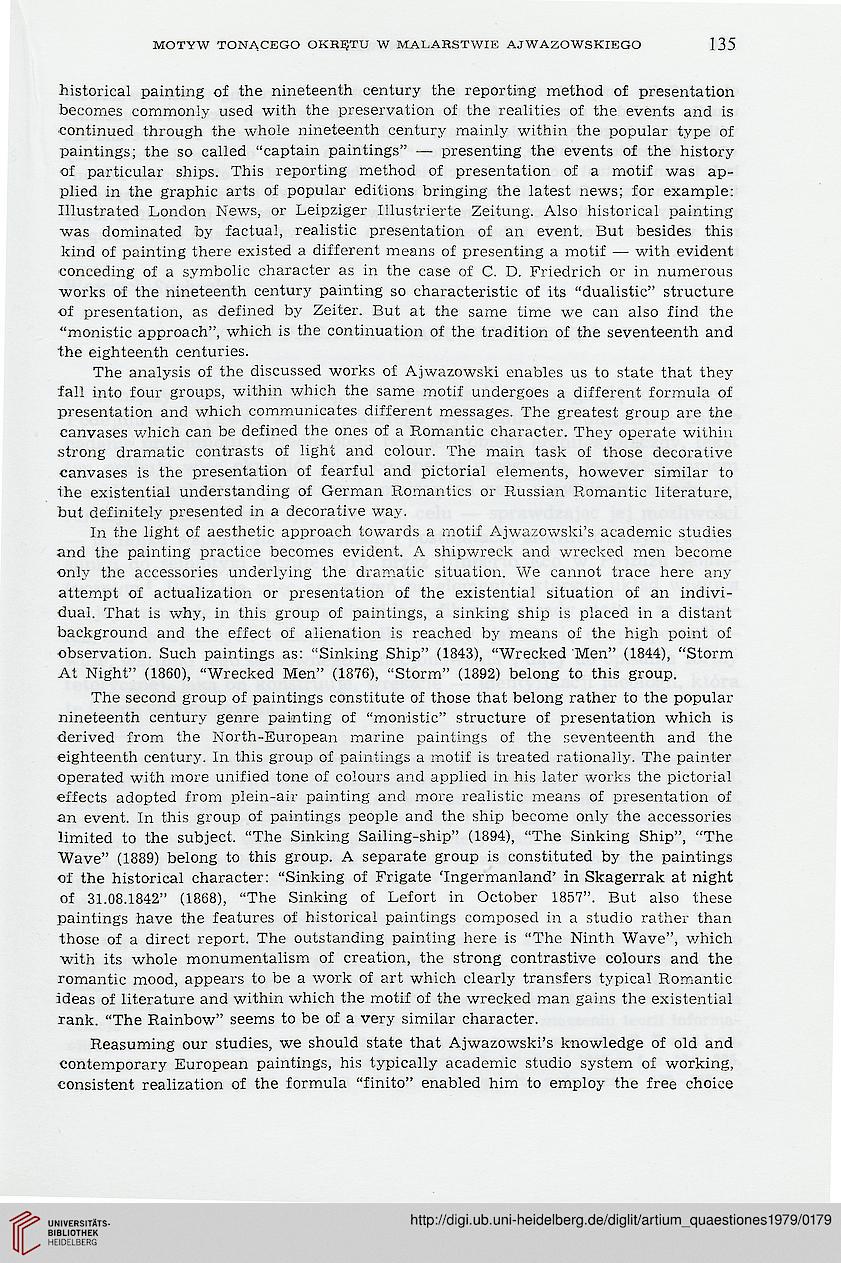 historical painting of the nineteenth century the reporting method of presentation
becomes commonly used with the preservation of the realities of the events and is
continued through the whole nineteenth century mainly within the popular type of
paintings; the so called “captain paintings” — presenting the events of the history
of particular ships. This reporting method of presentation of a motif was ap-
plied in the graphic arts of popular editions bringing the latest news; for example:
Illustrated London News, or Leipziger Illustrierte Zeitung. Also historical painting
was dominated by factual, realistic presentation of an event. But besides this
kind of painting there existed a different means of presenting a motif — with evident
eonceding of a symbolic character as in the case of C. D. Friedrich or in numerous
works of the nineteenth century painting so characteristic of its “dualistic” structure
of presentation, as defined by Zeiter. But at the same time we can also find the
“monistic approach”, which is the continuation of the tradition of the seventeenth and
the eighteenth centuries.

The analysis of the discussed works of Ajwazowski enables us to state that they
lali into four groups, within which the same motif undergoes a different formula of
presentation and which communicates different messages. The greatest group are the
canvases which can be defined the ones of a Romantic character. They operate within
strong dramatic contrasts of light and colour. The main task of those decorative
canvases is the presentation of fearful and pictorial elements, however similar to
ihe existential understanding of German Romanties or Russian Romantic literaturę,
but definitely presented in a decorative way.

In the light of aesthetic approach towards a motif Ajwazowski’s aeademic studies
and the painting practice becomes eyident. A shipwreck and wrecked men become
only the accessories underlying the dramatic situation. We cannot tracę here any
attempt of actualization or presentation of the existential situation of an indivi-
dual. That is why, in this group of paintings, a sinking ship is placed in a distant
background and the effect of alienation is reached by means of the high point of
observation. Such paintings as: “Sinking Ship” (1843), “Wrecked Men” (1844), “Storm
At Night” (1860), “Wrecked Men” (1876), “Storm” (1892) belong to this group.

The second group of paintings constitute of those that belong rather to the popular
nineteenth century genre painting of “monistic” structure of presentation which is
derived from the North-European marinę paintings of the seventeenth and the
eighteenth century. In this group of paintings a motif is treated rationally. The painter
operated with morę unified tonę of coiours and applied in his later works the pictorial
effects adopted from plein-air painting and morę realistic means of presentation of
an event. In this group of paintings people and the ship become only the accessories
limited to the subject. “The Sinking Sailing-ship” (1894), “The Sinking Ship”, “The
Wave” (1889) belong to this group. A separate group is constituted by the paintings
of the historical character: “Sinking of Frigate Tngermanland’ in Skagerrak at night
of 31.08.1842” (1868), “The Sinking of Lefort in October 1857”. But also these
paintings have the features of historical paintings composed in a studio rather than
those of a direct report. The outstanding painting here is “The Ninth Wave”, which
with its whole monumentalism of creation, the strong contrastive coiours and the
romantic mood, appears to be a work of art which clearly transfers typical Romantic
ideas of literaturę and within which the motif of the wrecked man gains the existential
rank. “The Rainbow” seems to be of a very similar character.

Reasuming our studies, we should state that Ajwazowski’s knowledge of old and
contemporary European paintings, his typically aeademic studio system of working,
consistent realization of the formula “finito” enabled him to employ the free choiee