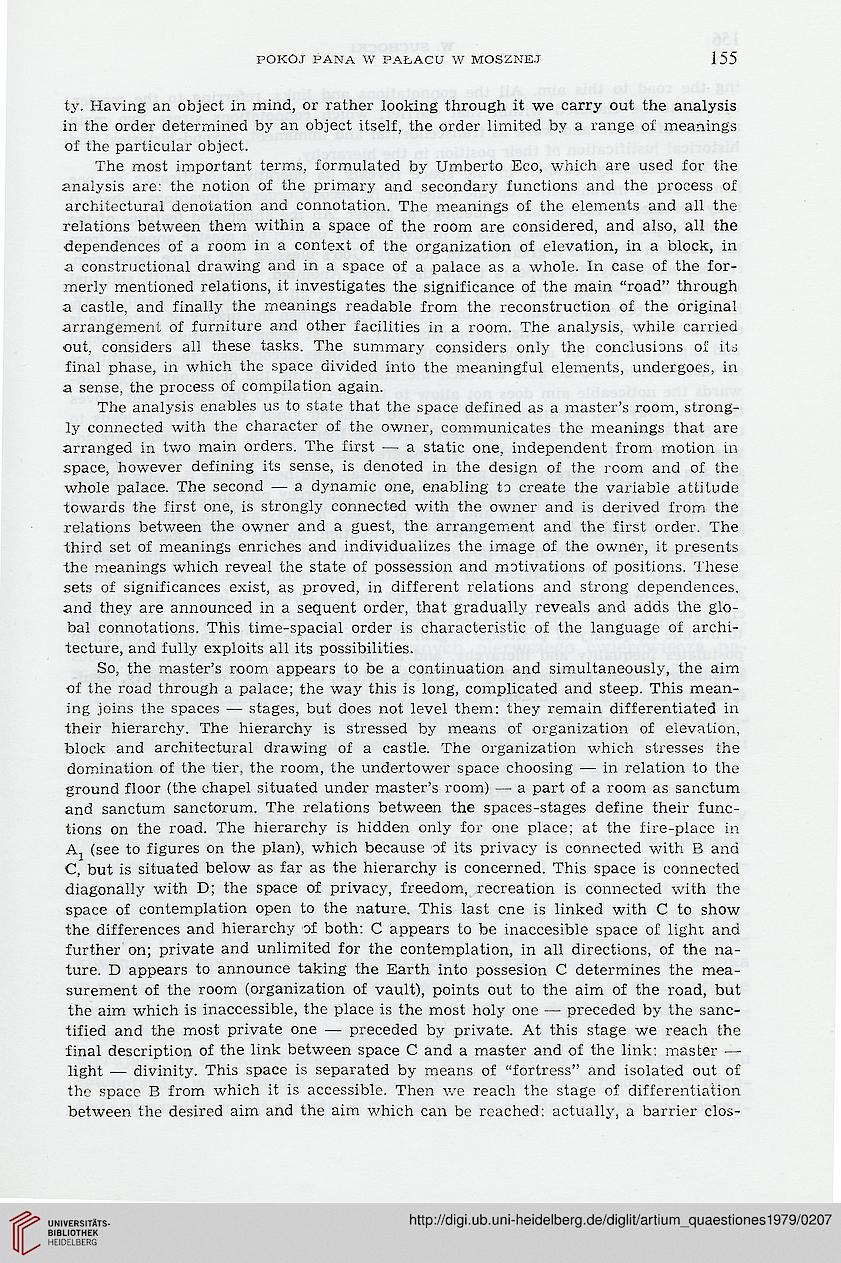 ty. Having an object in mind, or rather looking through it we carry out the analysis
in the order determined by an object itself, the order limited by a rangę of meanings
of the particular object.

The most important terms, formulated by Umberto Eco, which are used for the
analysis are: the notion of the primary and secondary functions and the process of
architectural denotation and connotation. The meanings of the elements and all the
relations between them within a space of the room are considered, and also, all the
dependences of a room in a context of the organization of elevation, in a błock, in
a constructional drawing and in a space of a pałace as a whole. In case of the for-
merly mentioned relations, it investigates the significance of the main “road” through
a castle, and finally the meanings readable from the reconstruction of the original
arrangement of furniture and other facilities in a room. The analysis, while carried
out, considers all these tasks. The summary considers only the concłusions of its
finał phase, in which the space divided into the meaningful elements, undergoes, in
a sense, the process of compilation again.

The analysis enables us to state that the space defined as a master’s room, strong-
ly connected with the character of the owner, communicates the meanings that are
arranged in two main orders. The first — a static one, independent from motion in
space, however defining its sense, is denoted in the design of the room and of the
whole pałace. The second — a dynamie one, enabling to create the variable attilude
towaras the first one, is strongly connected with the owner and is derived from the
relations between the owner and a guest, the arrangement and the first order. The
third set of meanings enriches and individualizes the image of the owner, it presents
the meanings which reveal the state of possession and motivations of positions. These
sets of significances exist, as proved, in different relations and strong dependences.
and they are announced in a seąuent order, that gradually reveals and adds the glo-
bal connotations. This time-spacial order is characteristic of the language of archi-
tecture, and fully exploits all its possibilities.

So, the master’s room appears to be a continuation and simultaneously, the aim
of the road through a pałace; the way this is long, complicated and steep. This mean-
ing joins the spaces — stages, but does not level them: they remain differentiated in
their hierarchy. The hierarchy is stressed by means of organization of elevation,
błock and architectural drawing of a castle. The organization which stresses the
domination of the tier, the room, the undertower space choosing — in relation to the
ground floor (the chapel situated under master’s room) — a part of a room as sanctum
and sanctum sanctorum. The relations between the spaces-stages define their func-
tions on the road. The hierarchy is hidden only for one place; at the fire-place in
Aj (see to figures on the plan), which because of its priyacy is connected with B and
C, but is situated below as far as the hierarchy is concerned. This space is connected
diagonally with D; the space of priyacy, freedom, reereation is connected with the
space of contemplation open to the naturę. This last cne is linked with C to show
the differences and hierarchy of both: C appears to be inaccesible space of light and
further on; priyate and unlimited for the contemplation, in all directions, of the na-
turę. D appears to announce taking the Earth into possesion C determines the mea-
surement of the room (organization of vault), points out to the aim of the road, but
the aim which is inaccessible, the place is the most holy one — preceded by the sanc-
tified and the most priyate one — preceded by priyate. At this stage we reach the
finał description of the link between space C and a master and of the link: master —
light — divinity. This space is separated by means of “fortress” and isolated out of
the space B from which it is accessible. Then we reach the stage of differentiation
between the desired aim and the aim which can be reached: actually, a barrier cios-