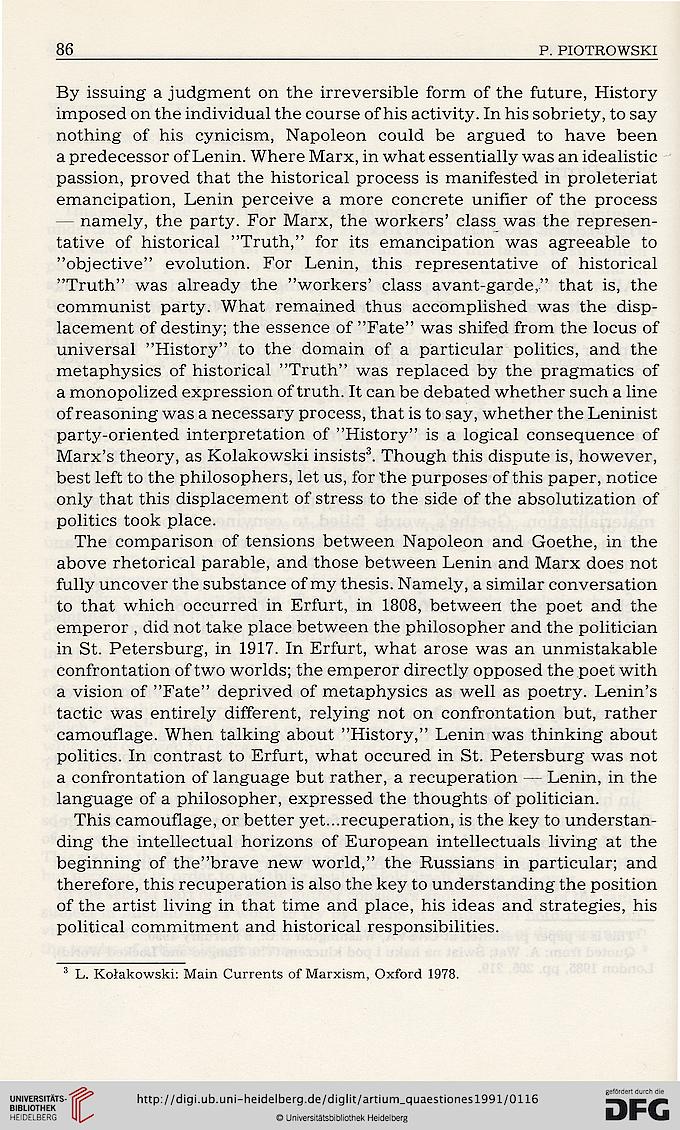 By issuing a judgment on the irreversible form of the future, History
imposed on the individual the course of his activity. In his sobriety, to say
nothing of his cynicism, Napoleon could be argued to have been
a predecessor of Lenin. Where Marx, in what essentially was an idealistic
passion, proved that the historical process is manifested in proleteriat
emancipation, Lenin perceive a more concrete unifier of the process
- namely, the party. For Marx, the workers' class was the represen-
tative of historical "Truth," for its emancipation was agreeable to
"objective" evolution. For Lenin, this representative of historical
"Truth" was already the "workers' class avant-garde," that is, the
communist party. What remained thus accomplished was the disp-
lacement of destiny; the essence of "Fate" was shifed from the locus of
universal "History" to the domain of a particular politics, and the
metaphysics of historical "Truth" was replaced by the pragmatics of
a monopolized expression of truth. It can be debated whether such a line
of reasoning was a necessary process, that is to say, whether the Leninist
party-oriented interpretation of "History" is a logical consequence of
Marx's theory, as Kołakowski insists^. Though this dispute is, however,
best left to the philosophers, let us, for the purposes of this paper, notice
only that this displacement of stress to the side of the absolutization of
politics took place.
The comparison of tensions between Napoleon and Goethe, in the
above rhetorical parable, and those between Lenin and Marx does not
fully uncover the substance of my thesis. Namely, a similar conversation
to that which occurred in Erfurt, in 1808, between the poet and the
emperor , did not take place between the philosopher and the politician
in St. Petersburg, in 1917. In Erfurt, what arose was an unmistakable
confrontation of two worlds; the emperor directly opposed the poet with
a vision of "Fate" deprived of metaphysics as well as poetry. Lenin's
tactic was entirely different, relying not on confrontation but, rather
camouflage. When talking about "History," Lenin was thinking about
politics. In contrast to Erfurt, what occured in St. Petersburg was not
a confrontation of language but rather, a recuperation — Lenin, in the
language of a philosopher, expressed the thoughts of politician.
This camouflage, or better yet...recuperation, is the key to understan-
ding the intellectual horizons of European intellectuals living at the
beginning of the"brave new world," the Russians in particular; and
therefore, this recuperation is also the key to understanding the position
of the artist living in that time and place, his ideas and strategies, his
political commitment and historical responsibilities.