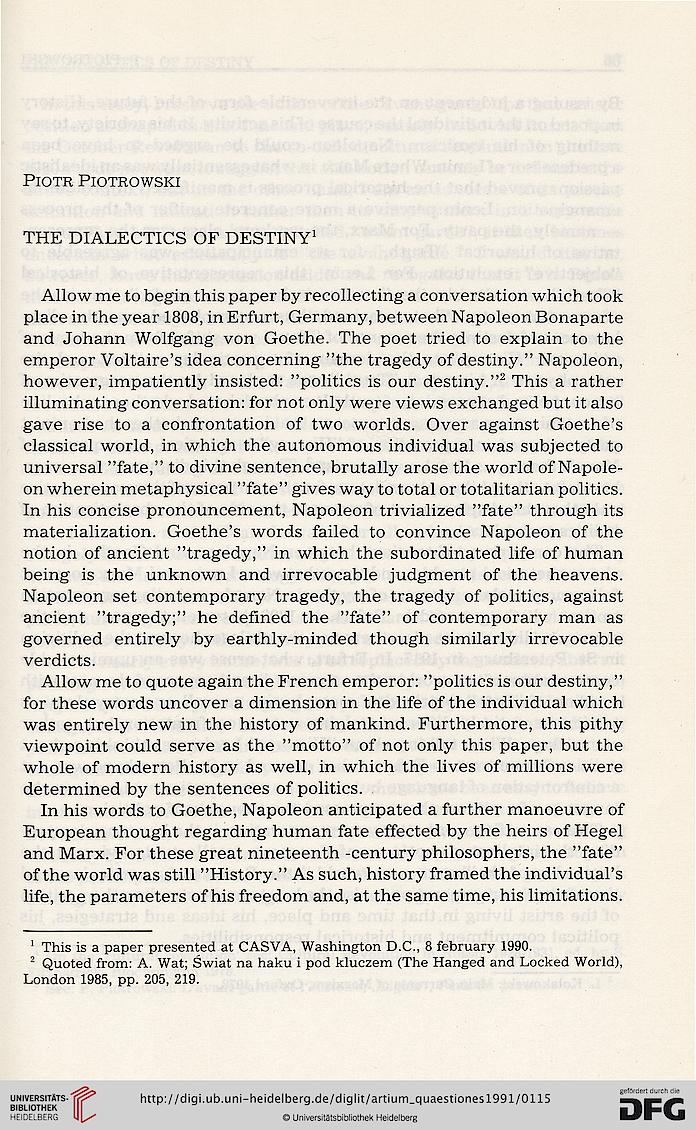 THE DIALECTICS OF DESTINY'

Allow me to begin this paper by recollecting a conversation which took
place in the year 1808, in Erfurt, Germany, between Napoleon Bonaparte
and Johann Wolfgang von Goethe. The poet tried to explain to the
emperor Voltaire's idea concerning "the tragedy of destiny." Napoleon,
however, impatiently insisted: "politics is our destiny.This a rather
illuminating conversation: for not only were views exchanged but it also
gave rise to a confrontation of two worlds. Over against Goethe's
classical world, in which the autonomous individual was subjected to
universal "fate," to divine sentence, brutally arose the world of Napole-
on wherein metaphysical "fate" gives way to total or totalitarian politics.
In his concise pronouncement, Napoleon trivialized "fate" through its
materialization. Goethe's words failed to convince Napoleon of the
notion of ancient "tragedy," in which the subordinated life of human
being is the unknown and irrevocable judgment of the heavens.
Napoleon set contemporary tragedy, the tragedy of politics, against
ancient "tragedy;" he defined the "fate" of contemporary man as
governed entirely by earthly-minded though similarly irrevocable
verdicts.
Allow me to quote again the French emperor: "politics is our destiny,"
for these words uncover a dimension in the life of the individual which
was entirely new in the history of mankind. Furthermore, this pithy
viewpoint could serve as the "motto" of not only this paper, but the
whole of modern history as well, in which the lives of millions were
determined by the sentences of politics.
In his words to Goethe, Napoleon anticipated a further manoeuvre of
European thought regarding human fate effected by the heirs of Hegel
and Marx. For these great nineteenth -century philosophers, the "fate"
of the world was still "History." As such, history framed the individual's
life, the parameters of his freedom and, at the same time, his limitations.