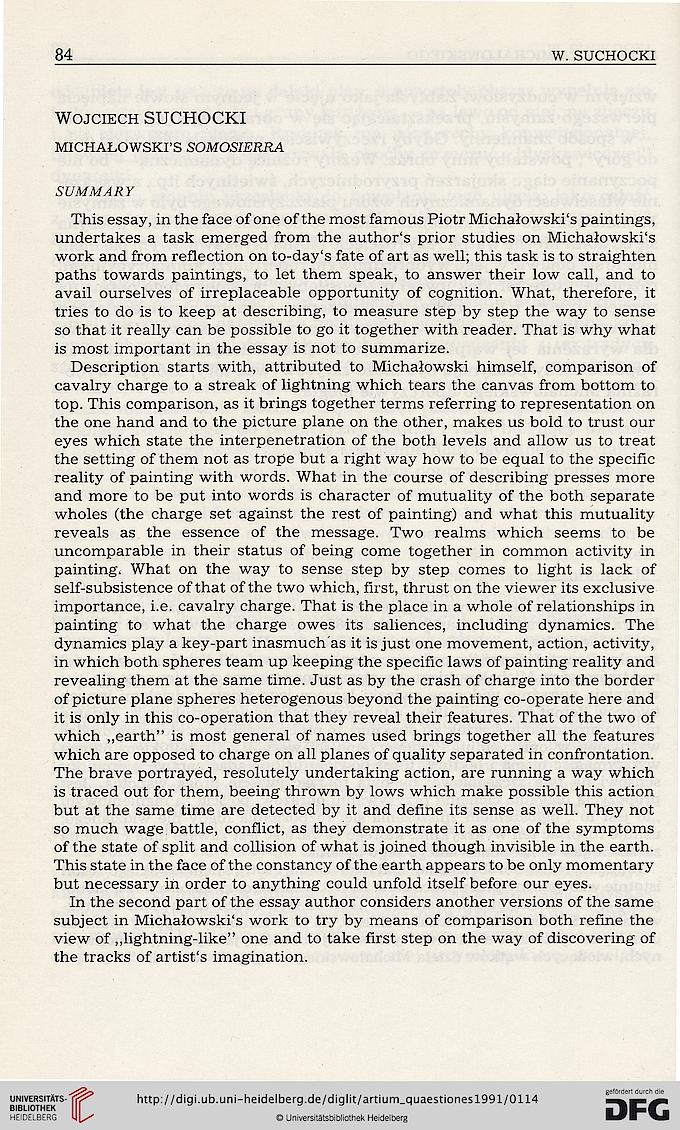 WOJCIECH SUCHOCKI
MICHAŁOWSKIE SOMOSIERRA
SUMMARŁ
This essay, in the face of one of the most famous Piotr Michaiowski's paintings,
undertakes a task emerged from the author's prior studies on Michaiowski's
work and from reflection on to-day's fate of art as well; this task is to straighten
paths towards paintings, to let them speak, to answer their low call, and to
avail ourselves of irreplaceable opportunity of cognition. What, therefore, it
tries to do is to keep at describing, to measure step by step the way to sense
so that it really can be possible to go it together with reader. That is why what
is most important in the essay is not to summarize.
Description starts with, attributed to Michałowski himself, comparison of
cavalry charge to a streak of lightning which tears the canvas from bottom to
top. This comparison, as it brings together terms referring to representation on
the one hand and to the picture plane on the other, makes us bold to trust our
eyes which state the interpenetration of the both levels and allow us to treat
the setting of them not as trope but a right way how to be equal to the specific
reality of painting with words. What in the course of describing presses more
and more to be put into words is character of mutuality of the both separate
wholes (the charge set against the rest of painting) and what this mutuality
reveals as the essence of the message. Two realms which seems to be
uncomparable in their status of being come together in common activity in
painting. What on the way to sense step by step comes to light is lack of
self-subsistence of that of the two which, first, thrust on the viewer its exclusive
importance, i.e. cavalry charge. That is the place in a whole of relationships in
painting to what the charge owes its saliences, including dynamics. The
dynamics play a key-part inasmuch as it is just one movement, action, activity,
in which both spheres team up keeping the specific laws of painting reality and
revealing them at the same time. Just as by the crash of charge into the border
of picture plane spheres heterogenous beyond the painting co-operate here and
it is only in this co-operation that they reveal their features. That of the two of
which „earth" is most general of names used brings together all the features
which are opposed to charge on all planes of quality separated in confrontation.
The brave portrayed, resolutely undertaking action, are running a way which
is traced out for them, beeing thrown by lows which make possible this action
but at the same time are detected by it and define its sense as well. They not
so much wage battle, conflict, as they demonstrate it as one of the symptoms
of the state of split and collision of what is joined though invisible in the earth.
This state in the face of the constancy of the earth appears to be only momentary
but necessary in order to anything could unfold itself before our eyes.
In the second part of the essay author considers another versions of the same
subject in Michaiowski's work to try by means of comparison both refine the
view of „lightning-like" one and to take first step on the way of discovering of
the tracks of artist's imagination.