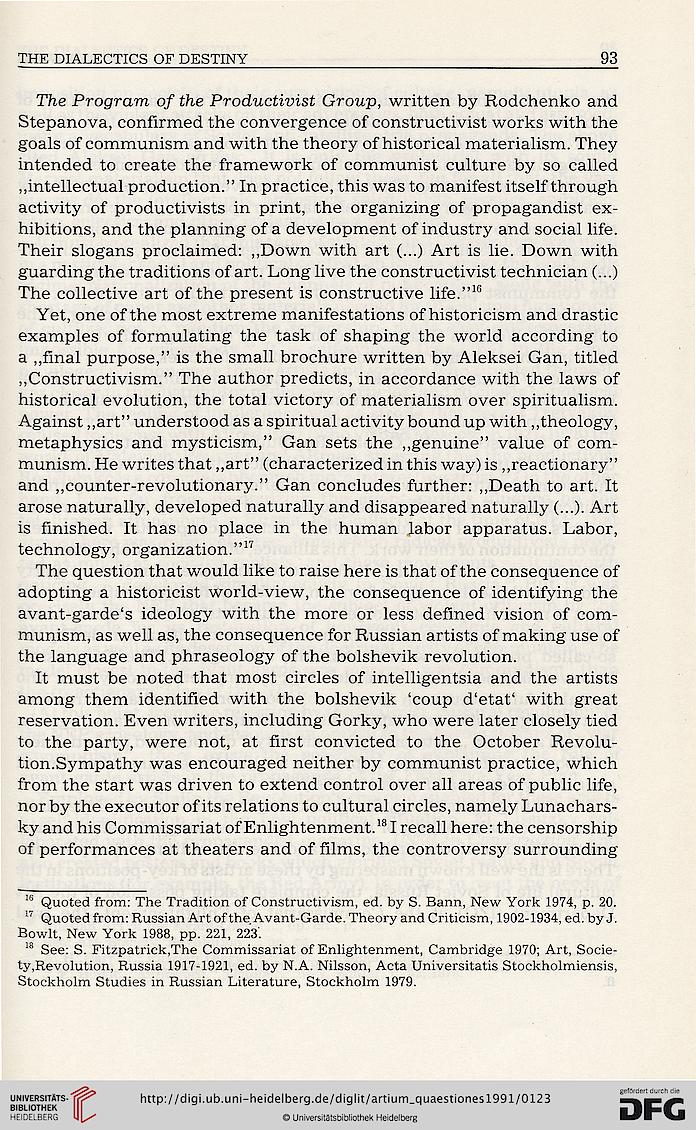 The Program of the Productiuist Group, written by Rodchenko and
Stepanova, confirmed the convergence of constructivist works with the
goals of communism and with the theory of historical materialism. They
intended to create the framework of communist culture by so called
,,intellectual production." In practice, this was to manifest itself through
activity of productivists in print, the organizing of propagandist ex-
hibitions, and the planning of a development of industry and social life.
Their slogans proclaimed: ,,Down with art (...) Art is lie. Down with
guarding the traditions of art. Long live the constructivist technician (...)
The collective art of the present is constructive life."^
Yet, one of the most extreme manifestations of historicism and drastic
examples of formulating the task of shaping the world according to
a ,,final purpose," is the small brochure written by Aleksei Gan, titled
„Constructivism." The author predicts, in accordance with the laws of
historical evolution, the total victory of materialism over spiritualism.
Against „art" understood as a spiritual activity bound up with „theology,
metaphysics and mysticism," Gan sets the „genuine" value of com-
munism. He writes that „art" (characterized in this way) is „reactionary"
and „counter-revolutionary." Gan concludes further: „Death to art. It
arose naturally, developed naturally and disappeared naturally (...). Art
is finished. It has no place in the human labor apparatus. Labor,
technology, organization."^
The question that would like to raise here is that of the consequence of
adopting a historicist world-view, the consequence of identifying the
avant-garde's ideology with the more or less defined vision of com-
munism, as well as, the consequence for Russian artists of making use of
the language and phraseology of the bolshevik revolution.
It must be noted that most circles of intelligentsia and the artists
among them identified with the bolshevik 'coup d'etat' with great
reservation. Even writers, including Gorky, who were later closely tied
to the party, were not, at first convicted to the October Revolu-
tion.Sympathy was encouraged neither by communist practice, which
from the start was driven to extend control over all areas of public life,
nor by the executor of its relations to cultural circles, namely Lunachars-
ky and his Commissariat of Enlightenment.^ I recall here: the censorship
of performances at theaters and of films, the controversy surrounding