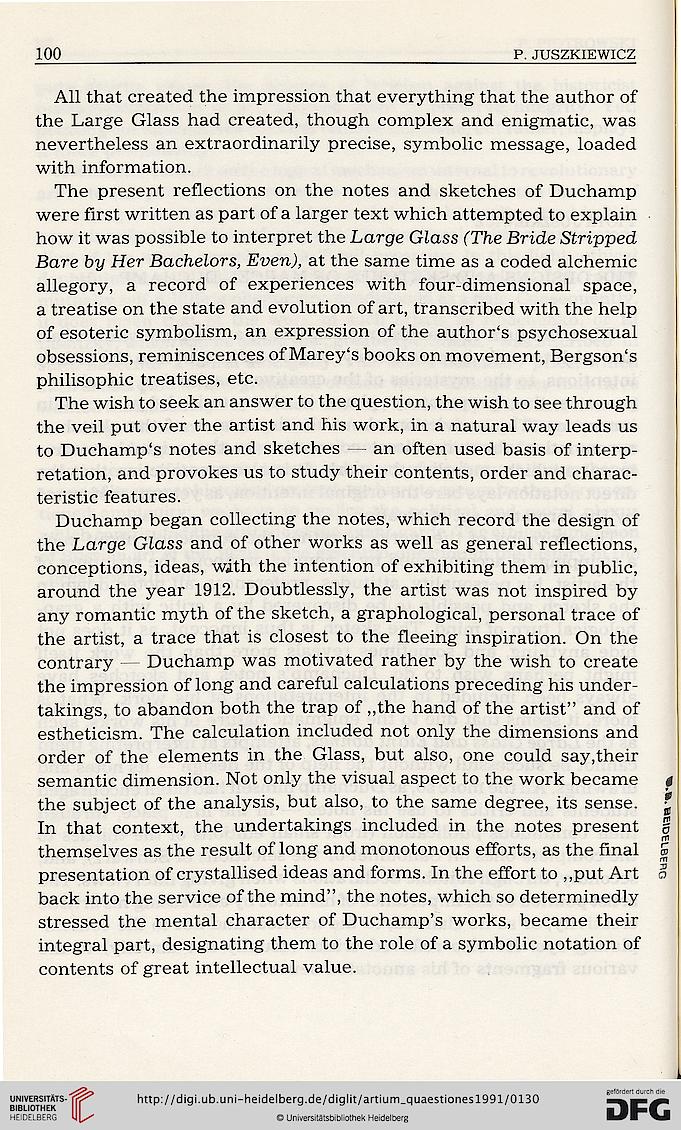 All that created the impression that everything that the author of
the Large Glass had created, though complex and enigmatic, was
nevertheless an extraordinarily precise, symbolic message, loaded
with information.
The present reflections on the notes and sketches of Duchamp
were first written as part of a larger text which attempted to explain
how it was possible to interpret the Large Glass (The Bride Stripped
Bare bg Her Bachelors, Even), at the same time as a coded alchemic
allegory, a record of experiences with four-dimensional space,
a treatise on the state and evolution of art, transcribed with the help
of esoteric symbolism, an expression of the author's psychosexual
obsessions, reminiscences of Marey's books on movement, Bergson's
philisophic treatises, etc.
The wish to seek an answer to the question, the wish to see through
the veil put over the artist and his work, in a natural way leads us
to Duchamp's notes and sketches an often used basis of interp-
retation, and provokes us to study their contents, order and charac-
teristic features.
Duchamp began collecting the notes, which record the design of
the Large Glass and of other works as well as general reflections,
conceptions, ideas, vdth the intention of exhibiting them in public,
around the year 1912. Doubtlessly, the artist was not inspired by
any romantic myth of the sketch, a graphological, personal trace of
the artist, a trace that is closest to the fleeing inspiration. On the
contrary Duchamp was motivated rather by the wish to create
the impression of long and careful calculations preceding his under-
takings, to abandon both the trap of „the hand of the artist" and of
estheticism. The calculation included not only the dimensions and
order of the elements in the Glass, but also, one could say,their
semantic dimension. Not only the visual aspect to the work became #
the subject of the analysis, but also, to the same degree, its sense.
In that context, the undertakings included in the notes present
themselves as the result of long and monotonous efforts, as the final
presentation of crystallised ideas and forms. In the effort to „put Art
back into the service of the mind", the notes, which so determinedly
stressed the mental character of Duchamp's works, became their
integral part, designating them to the role of a symbolic notation of
contents of great intellectual value.