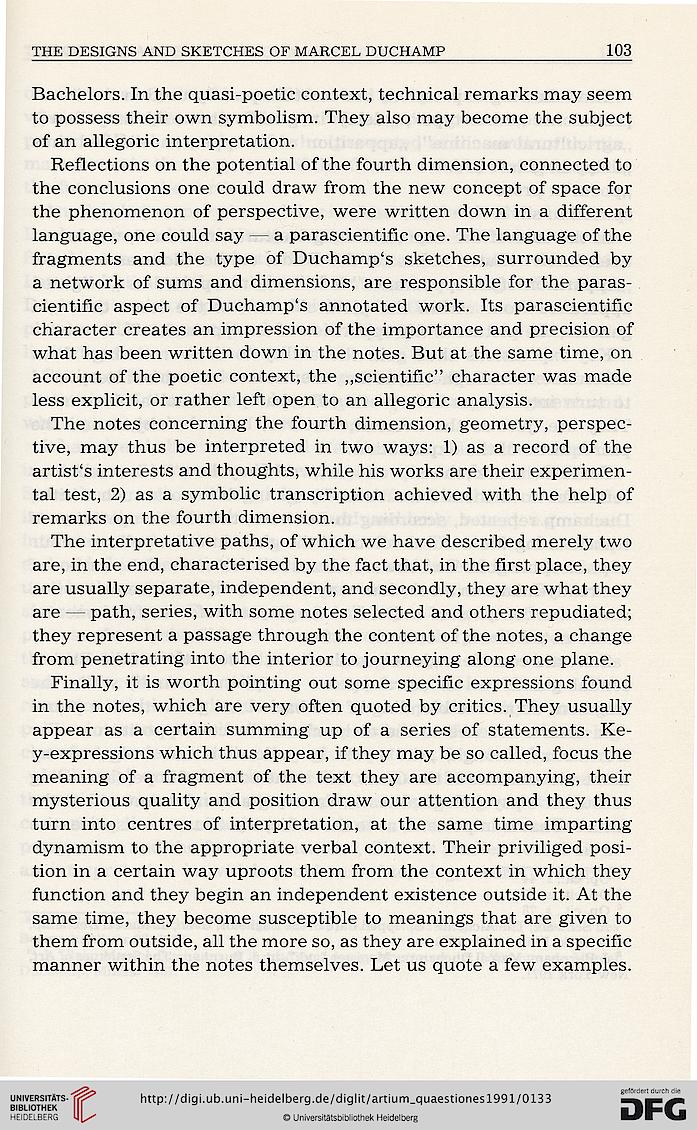 Bachelors. In the quasi-poetic context, technical remarks may seem
to possess their own symbolism. They also may become the subject
of an allegoric interpretation.
Reflections on the potential of the fourth dimension, connected to
the conclusions one could draw from the new concept of space for
the phenomenon of perspective, were written down in a different
language, one could say — a parascientilic one. The language of the
fragments and the type of Duchamp's sketches, surrounded by
a network of sums and dimensions, are responsible for the paras-
cientiiic aspect of Duchamp's annotated work. Its parascientilic
character creates an impression of the importance and precision of
what has been written down in the notes. But at the same time, on
account of the poetic context, the ,,scientific" character was made
less explicit, or rather left open to an allegoric analysis.
The notes concerning the fourth dimension, geometry, perspec-
tive, may thus be interpreted in two ways: 1) as a record of the
artist's interests and thoughts, while his works are their experimen-
tal test, 2) as a symbolic transcription achieved with the help of
remarks on the fourth dimension.
The interpretative paths, of which we have described merely two
are, in the end, characterised by the fact that, in the first place, they
are usually separate, independent, and secondly, they are what they
are — path, series, with some notes selected and others repudiated;
they represent a passage through the content of the notes, a change
from penetrating into the interior to journeying along one plane.
Finally, it is worth pointing out some specific expressions found
in the notes, which are very often quoted by critics. They usually
appear as a certain summing up of a series of statements. Ke-
y-expressions which thus appear, if they may be so called, focus the
meaning of a fragment of the text they are accompanying, their
mysterious quality and position draw our attention and they thus
turn into centres of interpretation, at the same time imparting
dynamism to the appropriate verbal context. Their priviliged posi-
tion in a certain way uproots them from the context in which they
function and they begin an independent existence outside it. At the
same time, they become susceptible to meanings that are given to
them from outside, all the more so, as they are explained in a specific
manner within the notes themselves. Let us quote a few examples.