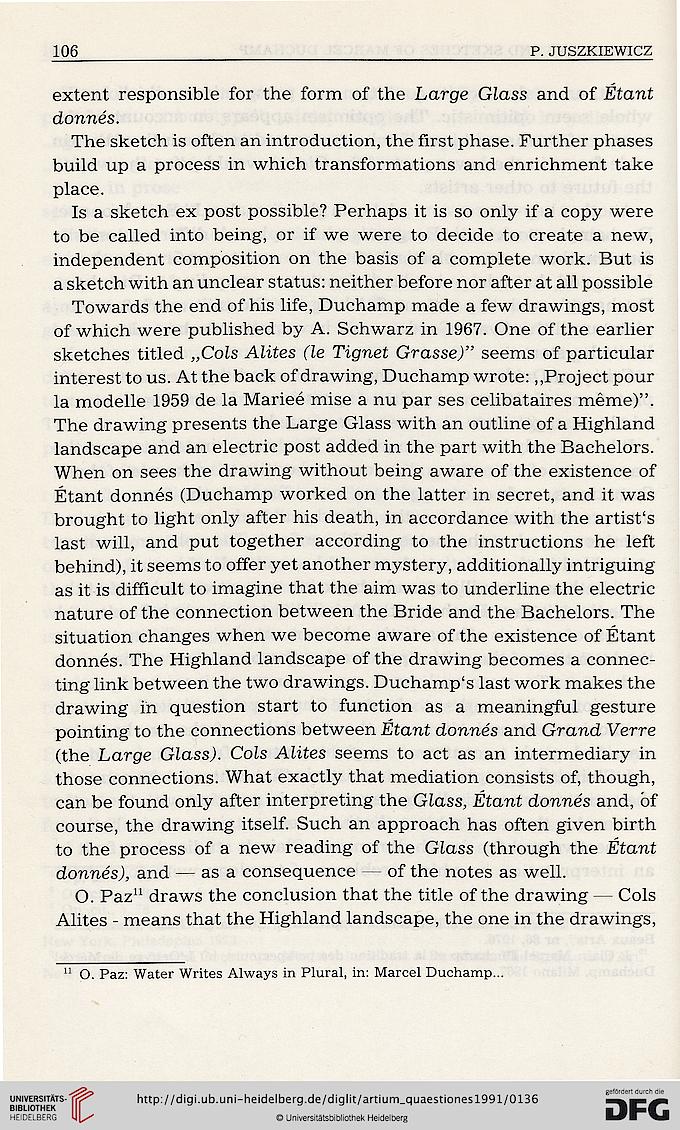 extent responsible for the form of the Large Glass and of Etawf
dow,7łes.
The sketch is often an introduction, the first phase. Further phases
build up a process in which transformations and enrichment take
place.
Is a sketch ex post possible? Perhaps it is so only if a copy were
to be called into being, or if we were to decide to create a new,
independent composition on the basis of a complete work. But is
a sketch with an unclear status: neither before nor after at all possible
Towards the end of his life, Duchamp made a few drawings, most
of which were published by A. Schwarz in 1967. One of the earlier
sketches titled „Cols Aides fie Tignet Grasse)" seems of particular
interest to us. At the back of drawing, Duchamp wrote: „Project pour
la modelle 1959 de la Mariee mise a nu par ses celibataires meme)".
The drawing presents the Large Glass with an outline of a Highland
landscape and an electric post added in the part with the Bachelors.
When on sees the drawing without being aware of the existence of
Etant donnes (Duchamp worked on the latter in secret, and it was
brought to light only after his death, in accordance with the artist's
last will, and put together according to the instructions he left
behind), it seems to offer yet another mystery, additionally intriguing
as it is difficult to imagine that the aim was to underline the electric
nature of the connection between the Bride and the Bachelors. The
situation changes when we become aware of the existence of Etant
donnes. The Highland landscape of the drawing becomes a connec-
ting link between the two drawings. Duchamp's last work makes the
drawing in question start to function as a meaningful gesture
pointing to the connections between Etar?.t do7T.7T.es and G7*a7Ld Ve7*7*e
(the La7*ge Glass). Cols Aides seems to act as an intermediary in
those connections. What exactly that mediation consists of, though,
can be found only after interpreting the Glass, Etard do7r,rr,es and, of
course, the drawing itself. Such an approach has often given birth
to the process of a new reading of the Glass (through the Eta7T.t
dowres), and — as a consequence — of the notes as well.
O. Paz" draws the conclusion that the title of the drawing — Cols
Alites - means that the Highland landscape, the one in the drawings,