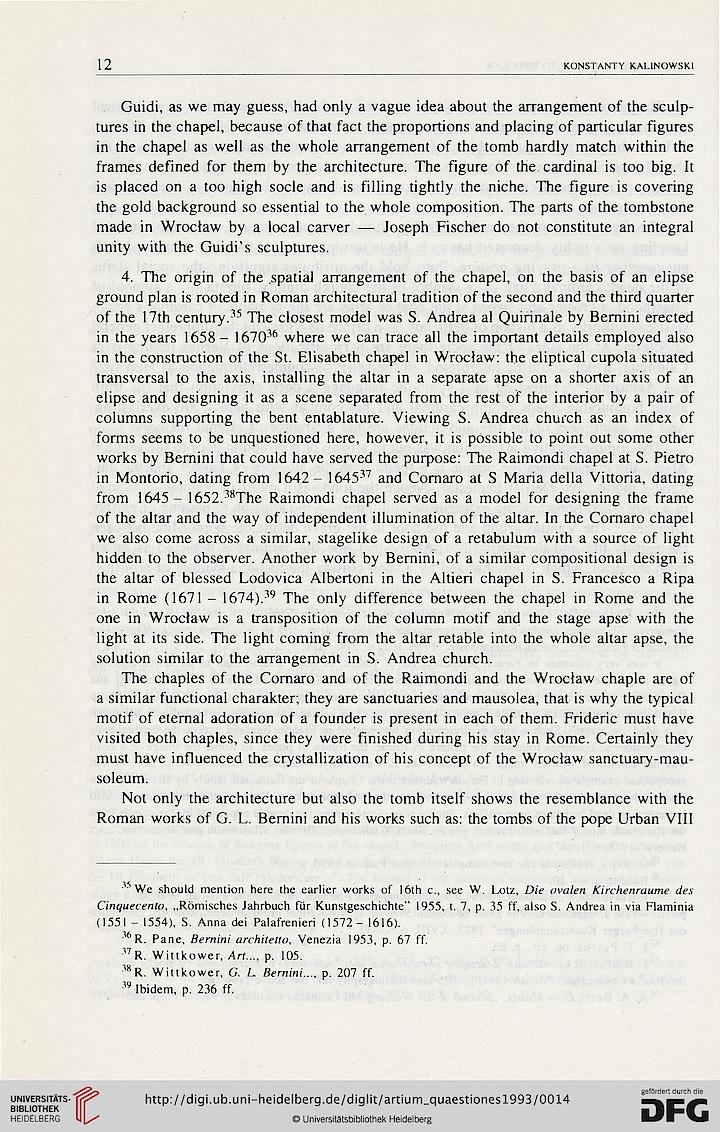 Guidi, as we may guess, had only a vague idea about the arrangement of the sculp-
tures in the chapel, because of that fact the proportions and placing of particular figures
in the chapel as well as the whole arrangement of the tomb hardly match within the
frames defined for them by the architecture. The figure of the cardinal is too big. It
is placed on a too high socle and is filling tightly the niche. The figure is covering
the gold background so essential to the whole composition. The parts of the tombstone
made in Wroclaw by a local carver — Joseph Fischer do not constitute an integral
unity with the Guidi’s sculptures.
4. The origin of the spatial arrangement of the chapel, on the basis of an elipse
ground plan is rooted in Roman architectural tradition of the second and the third quarter
of the 17th century.35 The closest model was S. Andrea al Quirinale by Bernini erected
in the years 1658- 167036 where we can trace all the important details employed also
in the construction of the St. Elisabeth chapel in Wroclaw: the eliptical cupola situated
transversal to the axis, installing the altar in a separate apse on a shorter axis of an
elipse and designing it as a scene separated from the rest of the interior by a pair of
columns supporting the bent entablature. Viewing S. Andrea church as an index of
forms seems to be unquestioned here, however, it is possible to point out some other
works by Bernini that could have served the purpose: The Raimondi chapel at S. Pietro
in Montorio, dating from 1642- 164537 and Comaro at S Maria della Vittoria, dating
from 1645 - 1652.38The Raimondi chapel served as a model for designing the frame
of the altar and the way of independent illumination of the altar. In the Comaro chapel
we also come across a similar, stagelike design of a retabulum with a source of light
hidden to the observer. Another work by Bernini, of a similar compositional design is
the altar of blessed Lodovica Albertom in the Altieri chapel in S. Francesco a Ripa
in Rome (1671 - 1674).39 The only difference between the chapel in Rome and the
one in Wroclaw is a transposition of the column motif and the stage apse with the
light at its side. The light coming from the altar retable into the whole altar apse, the
solution similar to the arrangement in S. Andrea church.
The chaples of the Comaro and of the Raimondi and the Wroclaw chaple are of
a similar functional charakter; they are sanctuaries and mausolea, that is why the typical
motif of eternal adoration of a founder is present in each of them. Frideric must have
visited both chaples, since they were finished during his stay in Rome. Certainly they
must have influenced the crystallization of his concept of the Wroclaw sanctuary-mau-
soleum.
Not only the architecture but also the tomb itself shows the resemblance with the
Roman works of G. L. Bernini and his works such as: the tombs of the pope Urban VIII