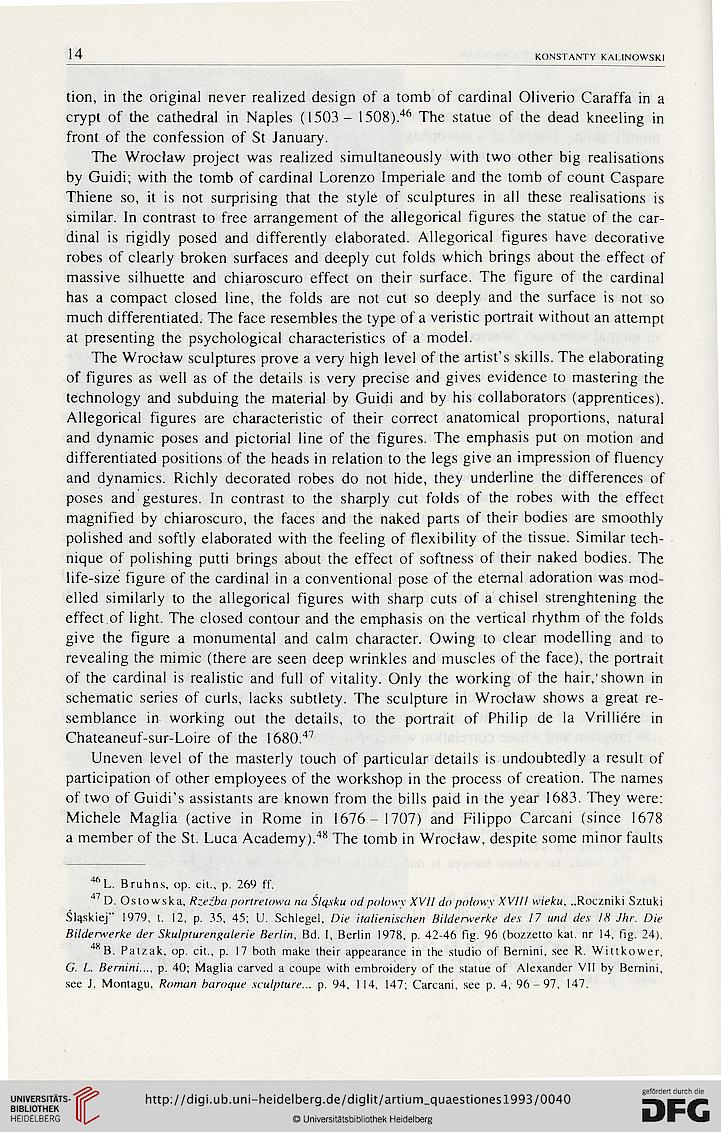 tion, in the original never realized design of a tomb of cardinal Oliverio Caraffa in a
crypt of the cathedral in Naples (1503 - 1508).46 The statue of the dead kneeling in
front of the confession of St January.
The Wrocław project was realized simultaneously with two other big realisations
by Guidi; with the tomb of cardinal Lorenzo Imperiale and the tomb of count Caspare
Thiene so, it is not surprising that the style of sculptures in all these realisations is
similar. In contrast to free arrangement of the allegorical figures the statue of the car-
dinal is rigidly posed and differently elaborated. Allegorical figures have decorative
robes of clearly broken surfaces and deeply cut folds which brings about the effect of
massive silhuette and chiaroscuro effect on their surface. The figure of the cardinal
has a compact closed line, the folds are not cut so deeply and the surface is not so
much differentiated. The face resembles the type of a veristic portrait without an attempt
at presenting the psychological characteristics of a model.
The Wroclaw sculptures prove a very high level of the artist’s skills. The elaborating
of figures as well as of the details is very precise and gives evidence to mastering the
technology and subduing the material by Guidi and by his collaborators (apprentices).
Allegorical figures are characteristic of their correct anatomical proportions, natural
and dynamic poses and pictorial line of the figures. The emphasis put on motion and
differentiated positions of the heads in relation to the legs give an impression of fluency
and dynamics. Richly decorated robes do not hide, they underline the differences of
poses and gestures. In contrast to the sharply cut folds of the robes with the effect
magnified by chiaroscuro, the faces and the naked parts of their bodies are smoothly
polished and softly elaborated with the feeling of flexibility of the tissue. Similar tech-
nique of polishing putti brings about the effect of softness of their naked bodies. The
life-size figure of the cardinal in a conventional pose of the eternal adoration was mod-
elled similarly to the allegorical figures with sharp cuts of a chisel strenghtening the
effect of light. The closed contour and the emphasis on the vertical rhythm of the folds
give the figure a monumental and calm character. Owing to clear modelling and to
revealing the mimic (there are seen deep wrinkles and muscles of the face), the portrait
of the cardinal is realistic and full of vitality. Only the working of the hair,'shown in
schematic series of curls, lacks subtlety. The sculpture in Wroclaw shows a great re-
semblance in working out the details, to the portrait of Philip de la Vrilliére in
Chateaneuf-sur-Loire of the 1680.47
Uneven level of the masterly touch of particular details is undoubtedly a result of
participation of other employees of the workshop in the process of creation. The names
of two of Guidi’s assistants are known from the bills paid in the year 1683. They were:
Michele Maglia (active in Rome in 1676 - 1707) and Filippo Carcani (since 1678
a member of the St. Luca Academy).48 The tomb in Wroclaw, despite some minor faults