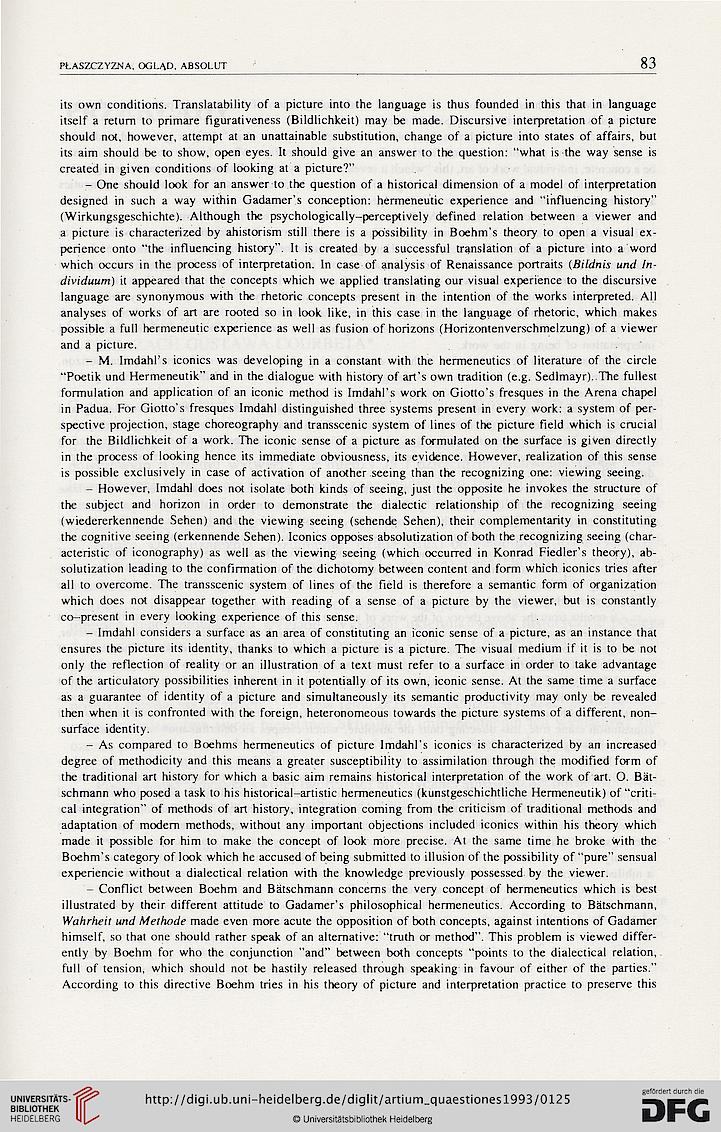 its own conditions. Translatability of a picture into the language is thus founded in this that in language
itself a return to primäre figurativeness (Bildlichkeit) may be made. Discursive interpretation of a picture
should not, however, attempt at an unattainable substitution, change of a picture into states of affairs, but
its aim should be to show, open eyes. It should give an answer to the question: “what is the way sense is
created in given conditions of looking at a picture?”
- One should look for an answer to the question of a historical dimension of a model of interpretation
designed in such a way within Gadamer’s conception: hermeneutic experience and “influencing history”
(Wirkungsgeschichte). Although the psychologically-perceptiVely defined relation between a viewer and
a picture is characterized by ahistorism still there is a possibility in Boehm’s theory to open a visual ex-
perience onto “the influencing history”. It is created by a successful translation of a picture into a word
which occurs in the process of interpretation. In case of analysis of Renaissance portraits (Bildnis und In-
dividuum) it appeared that the concepts which we applied translating our visual experience to the discursive
language are synonymous with the rhetoric concepts present in the intention of the works interpreted. All
analyses of works of art are rooted so in look like, in this case in the language of rhetoric, which makes
possible a full hermeneutic experience as well as fusion of horizons (Horizontenverschmelzung) of a viewer
and a picture.
- M. Imdahl’s iconics was developing in a constant with the hermeneutics of literature of the circle
“Poetik und Hermeneutik” and in the dialogue with history of art’s own tradition (e.g. Sedlmayr). The fullest
formulation and application of an iconic method is Imdahl’s work on Giotto’s fresques in the Arena chapel
in Padua. For Giotto’s fresques Imdahl distinguished three systems present in every work: a system of per-
spective projection, stage choreography and transscenic system of lines of the picture Field which is crucial
for the Bildlichkeit of a work. The iconic sense of a picture as formulated on the surface is given directly
in the process of looking hence its immediate obviousness, its evidence. However, realization of this sense
is possible exclusively in case of activation of another seeing than the recognizing one: viewing seeing.
- However, Imdahl does not isolate both kinds of seeing, just the opposite he invokes the structure of
the subject and horizon in order to demonstrate the dialectic relationship of the recognizing seeing
(wiedererkennende Sehen) and the viewing seeing (sehende Sehen), their complementarity in constituting
the cognitive seeing (erkennende Sehen). Iconics opposes absolutization of both the recognizing seeing (char-
acteristic of iconography) as well as the viewing seeing (which occurred in Konrad Fiedler’s theory), ab-
solutization leading to the confirmation of the dichotomy between content and form which iconics tries after
all to overcome. The transscenic system of lines of the Field is therefore a semantic form of organization
which does not disappear together with reading of a sense of a picture by the viewer, but is constantly
co-present in every looking experience of this sense.
- Imdahl considers a surface as an area of constituting an iconic sense of a picture, as an instance that
ensures the picture its identity, thanks to which a picture is a picture. The visual medium if it is to be not
only the reflection of reality or an illustration of a text must refer to a surface in order to take advantage
of the articulatory possibilities inherent in it potentially of its own, iconic sense. At the same time a surface
as a guarantee of identity of a picture and simultaneously its semantic productivity may only be revealed
then when it is confronted with the foreign, heteronomeous towards the picture systems of a different, non-
surface identity.
- As compared to Boehms hermeneutics of picture Imdahl’s iconics is characterized by an increased
degree of methodicity and this means a greater susceptibility to assimilation through the modiFied form of
the traditional art history for which a basic aim remains historical interpretation of the work of art. O. Bät-
schmann who posed a task to his historical-artistic hermeneutics (kunstgeschichtliche Hermeneutik) of “criti-
cal integration” of methods of art history, integration coming from the criticism of traditional methods and
adaptation of modem methods, without any important objections included iconics within his theory which
made it possible for him to make the concept of look more precise. At the same time he broke with the
Boehm’s category of look which he accused of being submitted to illusion of the possibility of “pure” sensual
experiencie without a dialectical relation with the knowledge previously possessed by the viewer.
- Conflict between Boehm and Bätschmann concerns the very concept of hermeneutics which is best
illustrated by their different attitude to Gadamer’s philosophical hermeneutics. According to Bätschmann,
Wahrheit und Methode made even more acute the opposition of both concepts, against intentions of Gadamer
himself, so that one should rather speak of an alternative: “truth or method”. This problem is viewed differ-
ently by Boehm for who the conjunction ’’and” between both concepts “points to the dialectical relation,
full of tension, which should not be hastily released through speaking in favour of either of the parties.”
According to this directive Boehm tries in his theory of picture and interpretation practice to preserve this