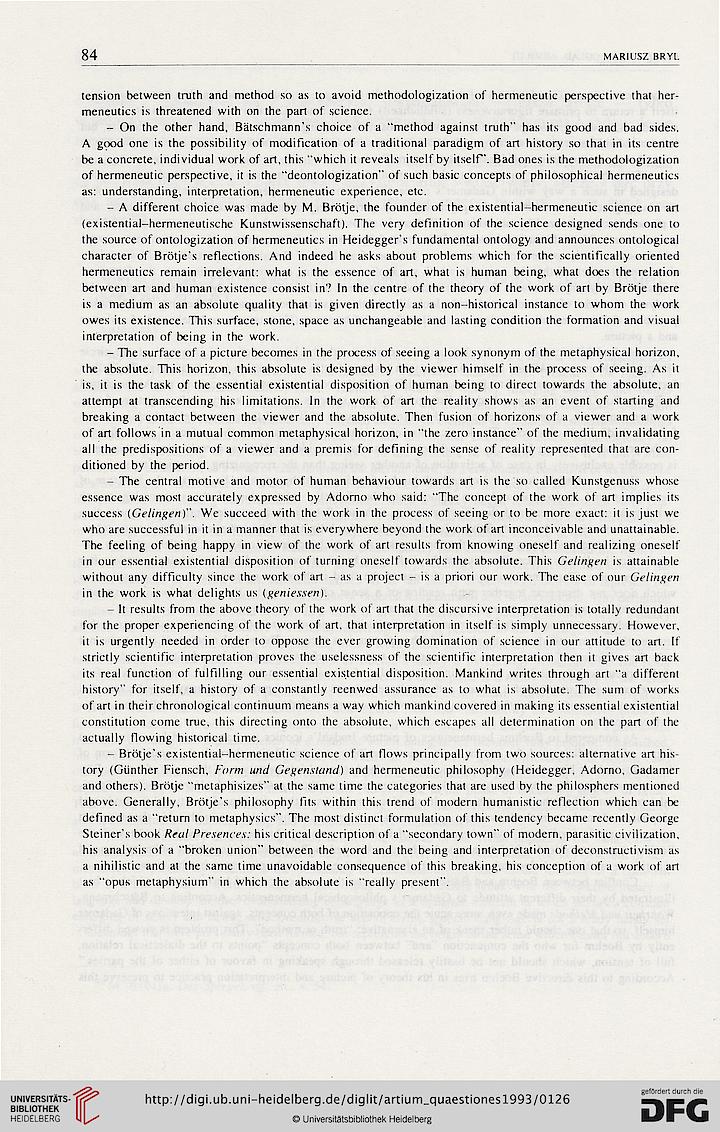 tension between truth and method so as to avoid methodologization of hermeneutic perspective that her-
meneutics is threatened with on the part of science.
- On the other hand, Bätschmann’s choice of a “method against truth” has its good and bad sides.
A good one is the possibility of modification of a traditional paradigm of art history so that in its centre
be a concrete, individual work of art, this “which it reveals itself by itself'. Bad ones is the methodologization
of hermeneutic perspective, it is the “deontologization” of such basic concepts of philosophical hermeneutics
as: understanding, interpretation, hermeneutic experience, etc.
- A different choice was made by M. Brötje, the founder of the existential-hermeneutic science on art
(existential-hermeneutische Kunstwissenschaft). The very definition of the science designed sends one to
the source of ontologization of hermeneutics in Heidegger’s fundamental ontology and announces ontological
character of Brötje’s reflections. And indeed he asks about problems which for the scientifically oriented
hermeneutics remain irrelevant: what is the essence of art, what is human being, what does the relation
between art and human existence consist in? In the centre of the theory of the work of art by Brötje there
is a medium as an absolute quality that is given directly as a non-historical instance to whom the work
owes its existence. This surface, stone, space as unchangeable and lasting condition the formation and visual
interpretation of being in the work.
- Tiie surface of a picture becomes in the process of seeing a look synonym of the metaphysical horizon,
the absolute. This horizon, this absolute is designed by the viewer himself in the process of seeing. As it
is, it is the task of the essential existential disposition of human being to direct towards the absolute, an
attempt at transcending his limitations. In the work of art the reality shows as an event of starting and
breaking a contact between the viewer and the absolute. Then fusion of horizons of a viewer and a work
of art follows in a mutual common metaphysical horizon, in “the zero instance” of the medium, invalidating
all the predispositions of a viewer and a premis for defining the sense of reality represented that are con-
ditioned by the period.
- The central motive and motor of human behaviour towards art is the so called Kunstgenuss whose
essence was most accurately expressed by Adorno who said: “The concept of the work of art implies its
success (Gelingen)”. We succeed with the work in the process of seeing or to be more exact: it is just we
who are successful in it in a manner that is everywhere beyond the work of art inconceivable and unattainable.
The feeling of being happy in view of the work of art results from knowing oneself and realizing oneself
in our essential existential disposition of turning oneself towards the absolute. This Gelingen is attainable
without any difficulty since the work of art - as a project - is a priori our work. The ease of our Gelingen
in the work is what delights us (geniessen).
- It results from the above theory of the work of art that the discursive interpretation is totally redundant
for the proper experiencing of the work of art, that interpretation in itself is simply unnecessary. However,
it is urgently needed in order to oppose the ever growing domination of science in our attitude to art. If
strictly scientific interpretation proves the uselessness of the scientific interpretation then it gives art back
its real function of fulfilling our essential existential disposition. Mankind writes through art “a different
history” for itself, a history of a constantly reenwed assurance as to what is absolute. The sum of works
of art in their chronological continuum means a way which mankind covered in making its essential existential
constitution come true, this directing onto the absolute, which escapes all determination on the part of the
actually flowing historical time.
- Brötje's existential-hermeneutic science of art flows principally from two sources: alternative art his-
tory (Günther Fiensch, Form und Gegenstand) and hermeneutic philosophy (Heidegger, Adorno, Gadamer
and others). Brötje “metaphisizes” at the same time the categories that are used by the philosphers mentioned
above. Generally, Brötje’s philosophy fits within this trend of modern humanistic reflection which can be
defined as a “return to metaphysics”. The most distinct formulation of this tendency became recently George
Steiner's book Real Presences: his critical description of a “secondary town" of modern, parasitic civilization,
his analysis of a “broken union” between the word and the being and interpretation of deconstructvism as
a nihilistic and at the same time unavoidable consequence of this breaking, his conception of a work of art
as “opus metaphysium” in which the absolute is “really present".