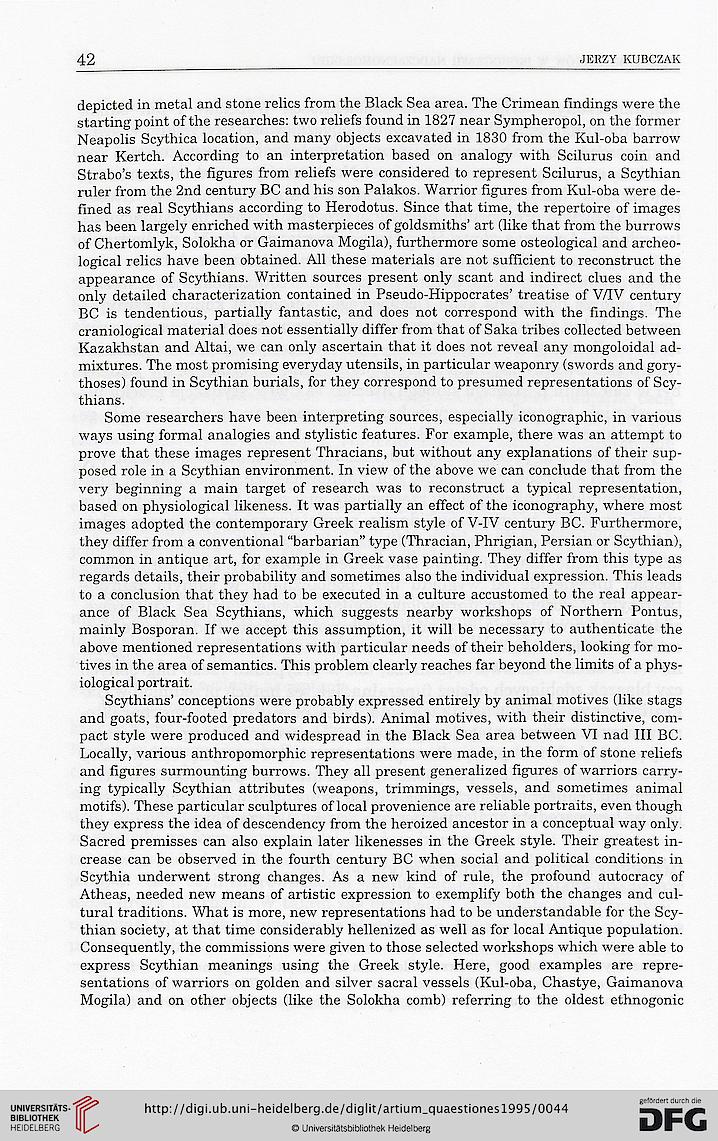 depicted in metal and stone relics from the Black Sea area. The Crimean findings were the
starting point of the researches: two reliefs found in 1827 near Sympheropol, on the former
Neapolis Scythica location, and many objects excavated in 1830 from the Kul-oba barrow
near Kertch. According to an interpretation based on analogy with Scilurus coin and
Strabo’s texts, the figures from reliefs were considered to represent Scilurus, a Scythian
ruler from the 2nd century BC and his son Palakos. Warrior figures from Kul-oba were de-
fined as real Scythians according to Herodotus. Since that time, the repertoire of images
has been largely enriched with masterpieces of goldsmiths’ art (like that from the burrows
of Chertomlyk, Solokha or Gaimanova Mogiła), furthermore some osteological and archeo-
logical relics have been obtained. All these materials are not sufficient to reconstruct the
appearance of Scythians. Written sources present only scant and indirect clues and the
only detailed characterization contained in Pseudo-Hippocrates’ treatise of V/IV century
BC is tendentious, partially fantastic, and does not correspond with the findings. The
craniological material does not essentially differ from that of Saka tribes collected between
Kazakhstan and Altai, we can only ascertain that it does not reveal any mongoloidal ad-
mixtures. The most promising everyday utensils, in particular weaponry (swords and gory-
thoses) found in Scythian burials, for they correspond to presumed representations of Scy-
thians.
Some researchers have been interpreting sources, especially iconographie, in various
ways using formal analogies and stylistic features. For example, there was an attempt to
prove that these images represent Thracians, but without any explanations of their sup-
posed role in a Scythian environment. In view of the above we can conclude that from the
very beginning a main target of research was to reconstruct a typical representation,
based on physiological likeness. It was partially an effect of the iconography, where most
images adopted the contemporary Greek realism style of V-IV century BC. Furthermore,
they differ from a conventional “barbarian” type (Thracian, Phrigian, Persian or Scythian),
common in antique art, for example in Greek vase painting. They differ from this type as
regards details, their probability and sometimes also the individual expression. This leads
to a conclusion that they had to be executed in a culture accustomed to the real appear-
ance of Black Sea Scythians, which suggests nearby workshops of Northern Pontus,
mainly Bosporan. If we accept this assumption, it will be necessary to authenticate the
above mentioned representations with particular needs of their beholders, looking for mo-
tives in the area of semantics. This problem clearly reaches far beyond the limits of a phys-
iological portrait.
Scythians’ conceptions were probably expressed entirely by animal motives (like stags
and goats, four-footed predators and birds). Animal motives, with their distinctive, com-
pact style were produced and widespread in the Black Sea area between VI nad III BC.
Locally, various anthropomorphic representations were made, in the form of stone reliefs
and figures surmounting burrows. They all present generalized figures of warriors carry-
ing typically Scythian attributes (weapons, trimmings, vessels, and sometimes animal
motifs). These particular sculptures of local provenience are reliable portraits, even though
they express the idea of descendency from the heroized ancestor in a conceptual way only.
Sacred premisses can also explain later likenesses in the Greek style. Their greatest in-
crease can be observed in the fourth century BC when social and political conditions in
Scythia underwent strong changes. As a new kind of rule, the profound autocracy of
Atheas, needed new means of artistic expression to exemplify both the changes and cul-
tural traditions. What is more, new representations had to be understandable for the Scy-
thian society, at that time considerably hellenized as well as for local Antique population.
Consequently, the commissions were given to those selected workshops which were able to
express Scythian meanings using the Greek style. Here, good examples are repre-
sentations of warriors on golden and silver sacral vessels (Kul-oba, Chastye, Gaimanova
Mogiła) and on other objects (like the Solokha comb) referring to the oldest ethnogonic