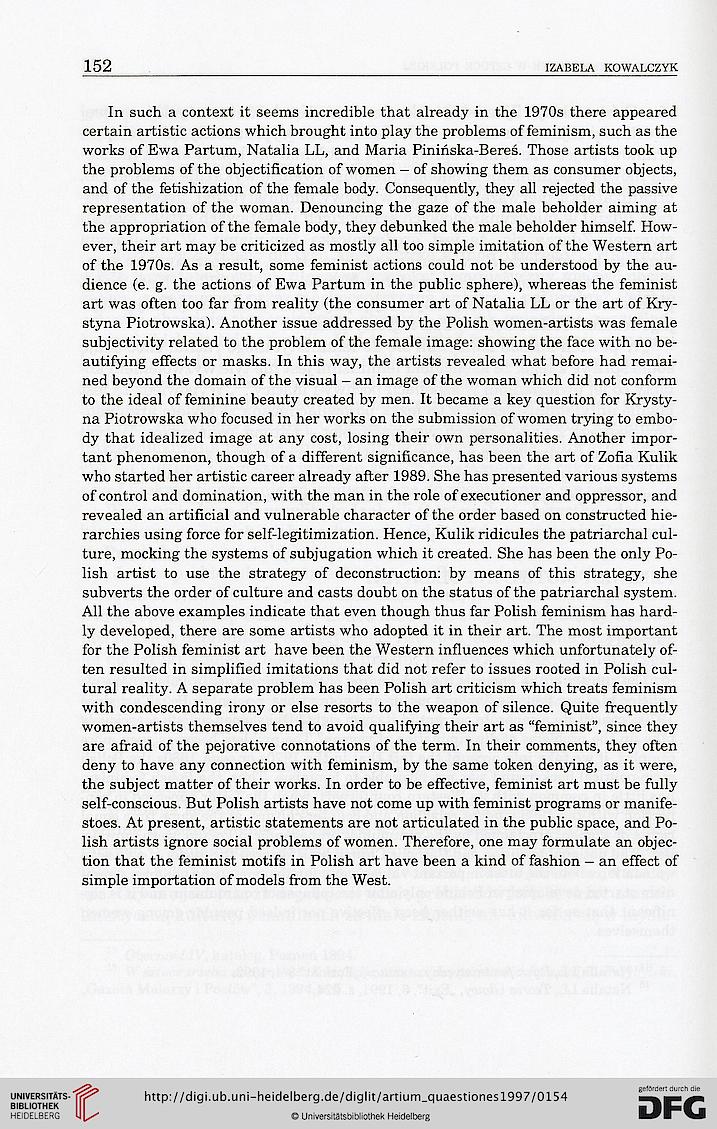 In such a context it seems incredible that already in the 1970s there appeared
certain artistic actions which brought into play the problems of feminism, such as the
works of Ewa Partum, Natalia LL, and Maria Pinińska-Bereś. Those artists took up
the problems of the objectification of women - of showing them as consumer objects,
and of the fetishization of the female body. Conseąuently, they all rejected the passive
representation of the woman. Denouncing the gazę of the małe beholder aiming at
the appropriation of the female body, they debunked the małe beholder himself. How-
ever, their art may be criticized as mostly all too simple imitation of the Western art
of the 1970s. As a result, some feminist actions could not be understood by the au-
dience (e. g. the actions of Ewa Partum in the public sphere), whereas the feminist
art was often too far from reality (the consumer art of Natalia LL or the art of Kry-
styna Piotrowska). Another issue addressed by the Polish women-artists was female
subjectivity related to the problem of the female image: showing the face with no be-
autifying effects or masks. In this way, the artists revealed what before had remai-
ned beyond the domain of the visual — an image of the woman which did not conform
to the ideał of feminine beauty created by men. It became a key ąuestion for Krysty-
na Piotrowska who focused in her works on the submission of women trying to embo-
dy that idealized image at any cost, losing their own personalities. Another impor-
tant phenomenon, though of a different significance, has been the art of Zofia Kulik
who started her artistic career already after 1989. She has presented various systems
of control and domination, with the man in the role of executioner and oppressor, and
revealed an artificial and vulnerable character of the order based on constructed hie-
rarchies using force for self-legitimization. Hence, Kulik ridicules the patriarchal cul-
ture, mocking the systems of subjugation which it created. She has been the only Po-
lish artist to use the strategy of deconstruction: by means of this strategy, she
subverts the order of culture and casts doubt on the status of the patriarchal system.
All the above examples indicate that even though thus far Polish feminism has hard-
ly developed, there are some artists who adopted it in their art. The most important
for the Polish feminist art have been the Western influences which unfortunately of-
ten resulted in simplified imitations that did not refer to issues rooted in Polish cul-
tural reality. A separate problem has been Polish art criticism which treats feminism
with condescending irony or else resorts to the weapon of silence. Quite freąuently
women-artists themselves tend to avoid ąualifying their art as “feminist”, sińce they
are afraid of the pejorative connotations of the term. In their comments, they often
deny to have any connection with feminism, by the same token denying, as it were,
the subject matter of their works. In order to be effective, feminist art must be fully
self-conscious. But Polish artists have not come up with feminist programs or manife-
stoes. At present, artistic statements are not articulated in the public space, and Po-
lish artists ignore social problems of women. Therefore, one may formulate an objec-
tion that the feminist motifs in Polish art have been a kind of fashion - an effect of
simple importation of models from the West.