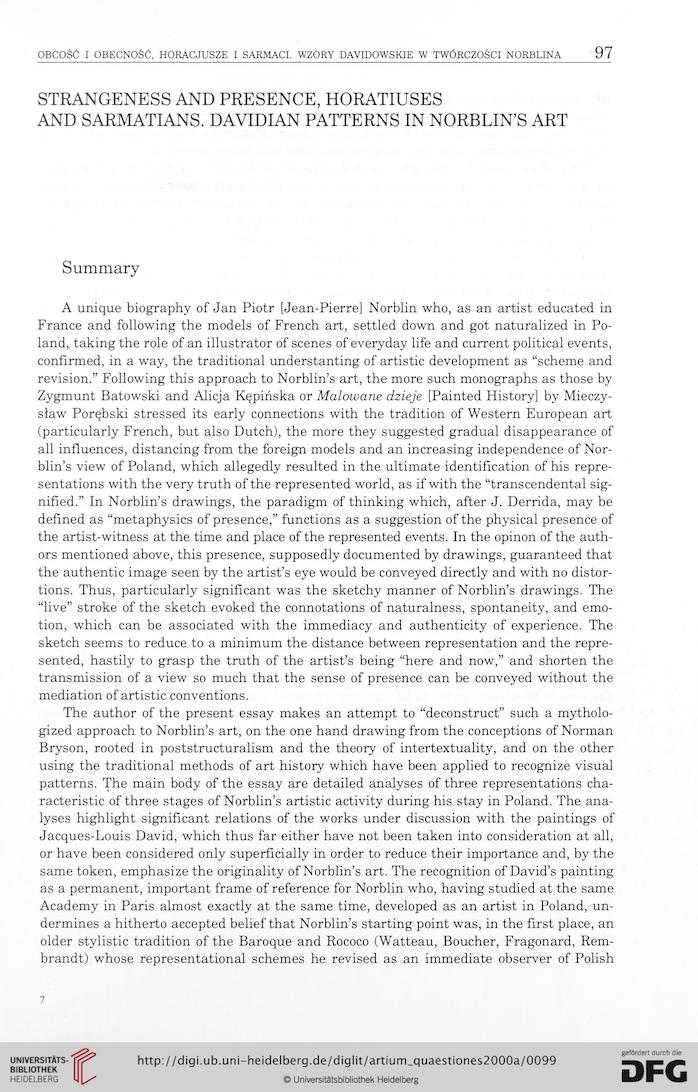 Summary
A uniąue biography of Jan Piotr [Jean-Pierre] Norblin who, as an artist educated in
France and following the models of French art, settled down and got naturalized in Po-
land, taking the role of an illustrator of scenes of everyday life and current political events,
confirmed, in a way, the traditional understanting of artistic development as “scheme and
revision.” Following this approach to Norblin’s art, the morę such monographs as those by
Zygmunt Batowski and Alicja Kępińska or Malowane dzieje [Painted History] by Mieczy-
sław Porębski stressed its early connections with the tradition of Western European art
(particularly French, but also Dutch), the morę they suggested gradual disappearance of
all influences, distancing from the foreign models and an increasing independence of Nor-
blin’s view of Poland, which allegedly resulted in the ultimate identification of his repre-
sentations with the very truth of the represented world, as if with the “transcendental sig-
nified.” In Norblin’s drawings, the paradigm of thinking which, after J. Derrida, may be
defined as “metaphysics of presence,” functions as a suggestion of the physical presence of
the artist-witness at the time and place of the represented events. In the opinon of the auth-
ors mentioned above, this presence, supposedly documented by drawings, guaranteed that
the authentic image seen by the artisfs eye would be conveyed directly and with no distor-
tions. Thus, particularly significant was the sketchy manner of Norblin’s drawings. The
“live” stroke of the sketch evoked the connotations of naturalness, spontaneity, and emo-
tion, which can be associated with the immediacy and authenticity of experience. The
sketch seems to reduce to a minimum the distance between representation and the repre-
sented, hastily to grasp the truth of the artisfs being “here and now,” and shorten the
transmission of a view so much that the sense of presence can be conveyed without the
mediation of artistic conventions.
The author of the present essay makes an attempt to “deconstruct” such a mytholo-
gized approach to Norblin’s art, on the one hand drawing from the conceptions of Norman
Bryson, rooted in poststructuralism and the theory of intertextuality, and on the other
using the traditional methods of art history which have been applied to recognize visual
patterns. The main body of the essay are detailed analyses of three representations cha-
racteristic of three stages of Norblin’s artistic activity during his stay in Poland. The ana-
lyses highlight significant relations of the works under discussion with the paintings of
Jacąues-Louis David, which thus far either have not been taken into consideration at all,
or have been considered only superflcially in order to reduce their importance and, by the
same token, emphasize the originality of Norblin’s art. The recognition of David’s painting
as a permanent, important frame of reference for Norblin who, having studied at the same
Academy in Paris almost exactly at the same time, developed as an artist in Poland, un-
dermines a hitherto accepted belief that Norblin’s starting point was, in the first place, an
older stylistic tradition of the Baroąue and Rococo (Watteau, Boucher, Fragonard, Rem-
brandt) whose representational schemes he revised as an immediate observer of Polish