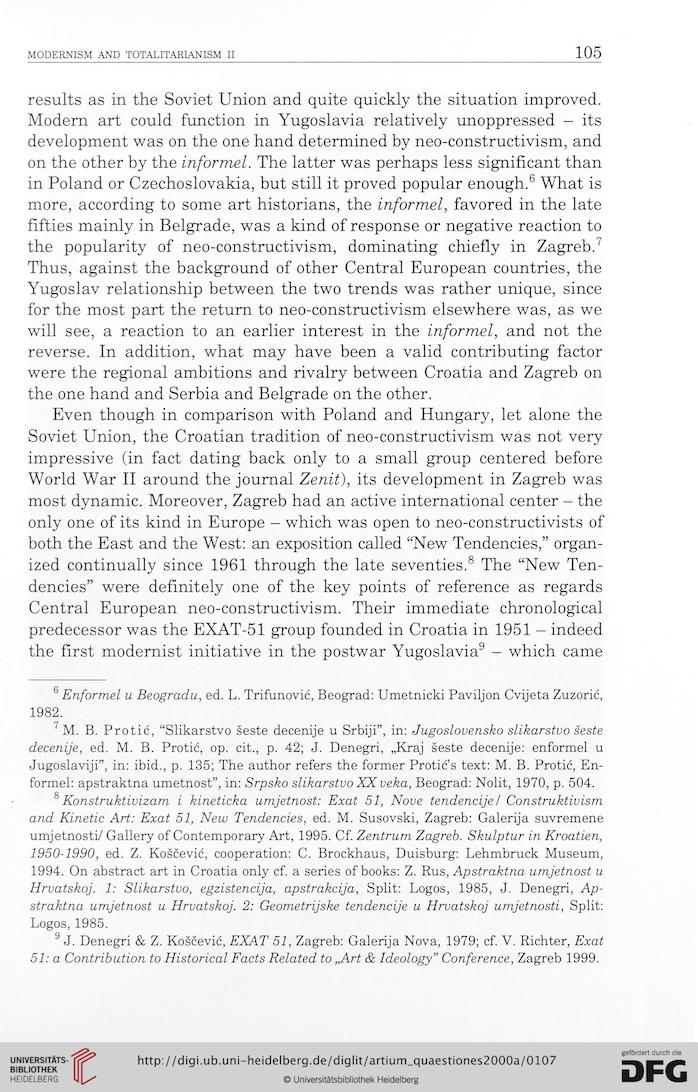 results as in the Soviet Union and ąuite ąuickly the situation improved.
Modern art could function in Yugoslavia relatively unoppressed - its
development was on the one hand determined by neo-constructivism, and
on the other by the informel. The latter was perhaps less significant than
in Poland or Czechoslovakia, but still it proved popular enough.6 What is
morę, according to some art historians, the informel, favored in the late
fifties mainly in Belgrade, was a kind of response or negative reaction to
the popularity of neo-constructivism, dominating chiefly in Zagreb.7
Thus, against the background of other Central European countries, the
Yugoslav relationship between the two trends was rather uniąue, sińce
for the most part the return to neo-constructivism elsewhere was, as we
will see, a reaction to an earlier interest in the informel, and not the
reverse. In addition, what may have been a valid contributing factor
were the regional ambitions and rivalry between Croatia and Zagreb on
the one hand and Serbia and Belgrade on the other.
Even though in comparison with Poland and Hungary, let alone the
Soviet Union, the Croatian tradition of neo-constructivism was not very
impressive (in fact dating back only to a smali group centered before
World War II around the joumal Zenit), its development in Zagreb was
most dynamie. Moreover, Zagreb had an active intemational center - the
only one of its kind in Europę - which was open to neo-constructivists of
both the East and the West: an exposition called “New Tendencies,” organ-
ized continually sińce 1961 through the late seventies.8 The “New Ten-
dencies” were definitely one of the key points of reference as regards
Central European neo-constructivism. Their immediate chronological
predecessor was the EXAT-51 group founded in Croatia in 1951 - indeed
the first modernist initiative in the postwar Yugoslavia9 - which came