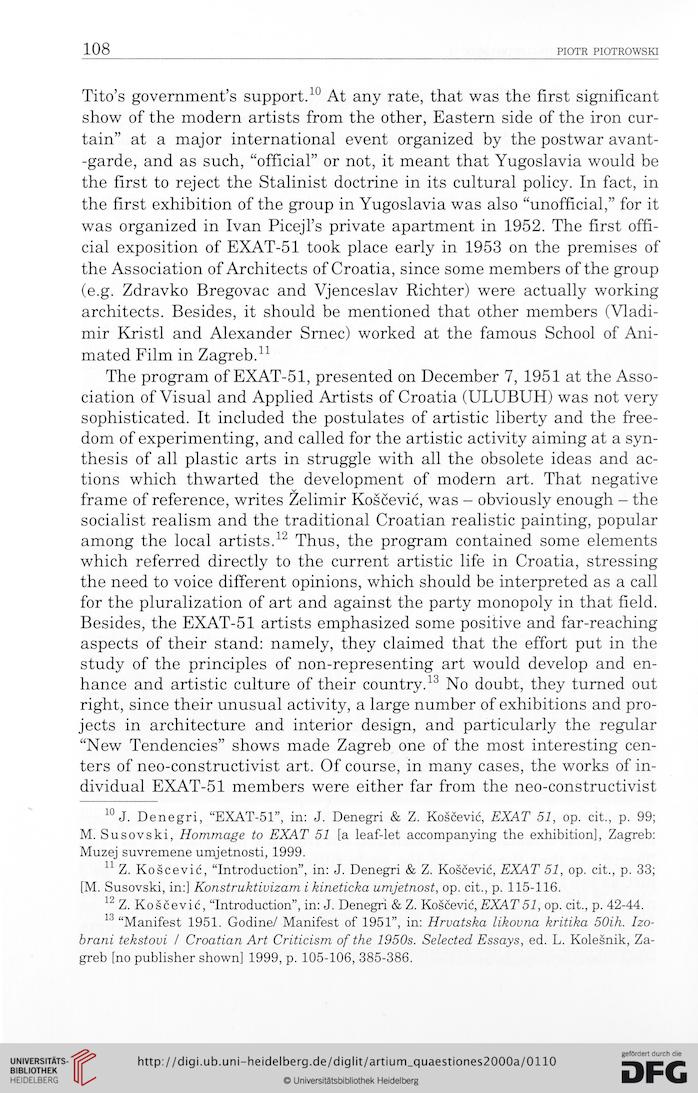 Tito’s government’s support.10 At any ratę, that was the first significant
show of the modern artists from the other, Eastern side of the iron cur-
tain” at a major international event organized by the postwar avant-
-garde, and as such, “official” or not, it meant that Yugoslavia would be
the first to reject the Stalinist doctrine in its cultural policy. In fact, in
the first exhibition of the group in Yugoslavia was also “unofficial,” for it
was organized in Ivan Picejfs private apartment in 1952. The first offi-
cial exposition of EXAT-51 took place early in 1953 on the premises of
the Association of Architects of Croatia, sińce some members of the group
(e.g. Zdravko Bregovac and Vjenceslav Richter) were actually working
architects. Besides, it should be mentioned that other members (Vladi-
mir Kristl and Alexander Srnec) worked at the famous School of Ani-
mated Film in Zagreb.* 11
The program of EXAT-51, presented on December 7, 1951 at the Asso-
ciation of Visual and Applied Artists of Croatia (ULUBUH) was not very
sophisticated. It included the postulates of artistic liberty and the free-
dom of experimenting, and called for the artistic activity aiming at a syn-
thesis of all plastic arts in struggle with all the obsolete ideas and ac-
tions which thwarted the development of modern art. That negative
frame of reference, writes Zelimir Koścević, was - obviously enough - the
socialist realism and the traditional Croatian realistic painting, popular
among the local artists.12 Thus, the program contained some elements
which referred directly to the current artistic life in Croatia, stressing
the need to voice different opinions, which should be interpreted as a cali
for the pluralization of art and against the party monopoly in that field.
Besides, the EXAT-51 artists emphasized some positive and far-reaching
aspects of their stand: namely, they claimed that the effort put in the
study of the principles of non-representing art would develop and en-
hance and artistic culture of their country.13 No doubt, they turned out
right, sińce their unusual activity, a large number of exhibitions and pro-
jects in architecture and interior design, and particularly the regular
“New Tendencies” shows madę Zagreb one of the most interesting cen-
ters of neo-constructivist art. Of course, in many cases, the works of in-
dividual EXAT-51 members were either far from the neo-constructivist
10 J. Denegri, “EXAT-51”, in: J. Denegri & Z. Kośćević, EXAT 51, op. cit., p. 99;
M. Susovski, Hommage to EXAT 51 [a leaf-let accompanying the exhibition], Zagreb:
Muzej suvremene umjetnosti, 1999.
11 Z. Koścević, “Introduction”, in: J. Denegri & Z. Kośćević, EXAT 51, op. cit., p. 33;
[M. Susovski, in:] Konstruktiuizam i kineticka umjetnost, op. cit., p. 115-116.
12 Z. Kośćević, “Introduction”, in: J. Denegri & Z. Kosćević, EXAT51, op. cit., p. 42-44.
13 “Manifest 1951. Godine/ Manifest of 1951”, in: Hruatska likouna kritika 50ih. Izo-
brani tekstooi / Croatian Art Criticism of the 1950s. Selected Essays, ed. L. Koleśnik, Za-
greb [no publisher shown] 1999, p. 105-106, 385-386.