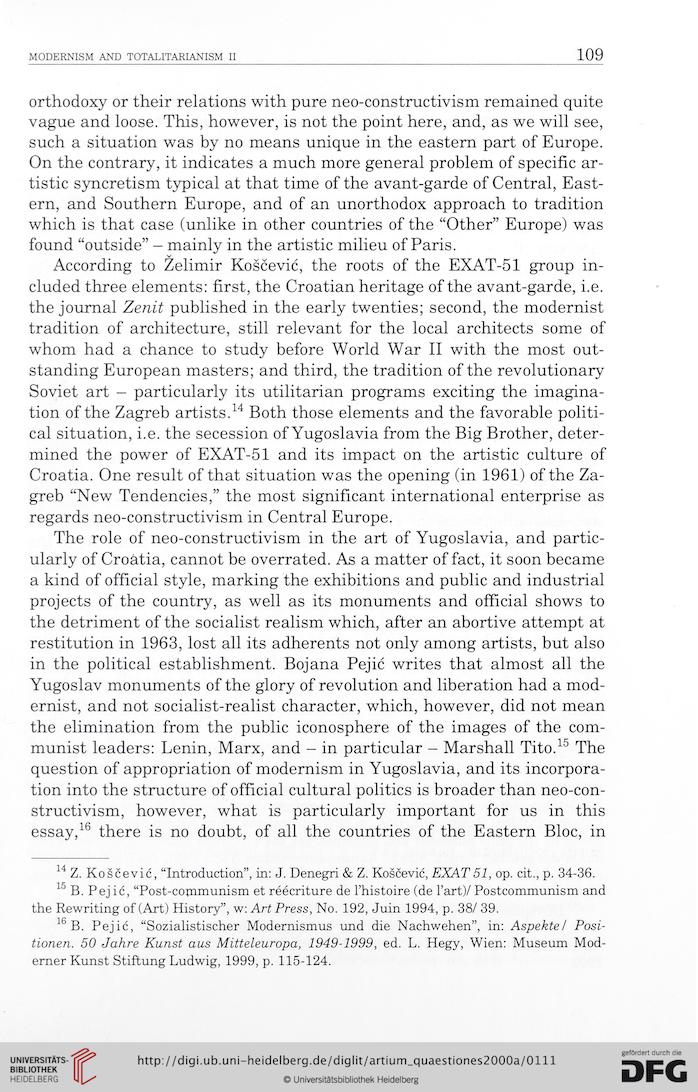 orthodoxy or their relations with pure neo-constructivism remained ąuite
vague and loose. This, however, is not the point here, and, as we will see,
such a situation was by no means uniąue in the eastern part of Europę.
On the contrary, it indicates a much morę generał problem of specific ar-
tistic syncretism typical at that time of the avant-garde of Central, East-
ern, and Southern Europę, and of an unorthodox approach to tradition
which is that case (unlike in other countries of the “Other” Europę) was
found “outside” - mainly in the artistic milieu of Paris.
According to Zelimir Kośćević, the roots of the EXAT-51 group in-
cluded three elements: first, the Croatian heritage of the avant-garde, i.e.
the journal Zenit published in the early twenties; second, the modernist
tradition of architecture, still relevant for the local architects some of
whom had a chance to study before World War II with the most out-
standing European masters; and third, the tradition of the revolutionary
Soviet art - particularly its utilitarian programs exciting the imagina-
tion of the Zagreb artists.14 Both those elements and the favorable politi-
cal situation, i.e. the secession of Yugoslavia from the Big Brother, deter-
mined the power of EXAT-51 and its impact on the artistic culture of
Croatia. One result of that situation was the opening (in 1961) of the Za-
greb “New Tendencies,” the most significant international enterprise as
regards neo-constructivism in Central Europę.
The role of neo-constructivism in the art of Yugoslavia, and partic-
ularly of Crohtia, cannot be overrated. As a matter of fact, it soon became
a kind of official style, marking the exhibitions and public and industrial
projects of the country, as well as its monuments and official shows to
the detriment of the socialist realism which, after an abortive attempt at
restitution in 1963, lost all its adherents not only among artists, but also
in the political establishment. Bojana Pejić writes that almost all the
Yugoslav monuments of the glory of revolution and liberation had a mod-
ernist, and not socialist-realist character, which, however, did not mean
the elimination from the public iconosphere of the images of the com-
munist leaders: Lenin, Marx, and - in particular - Marshall Tito.15 The
ąuestion of appropriation of modernism in Yugoslavia, and its incorpora-
tion into the structure of official cultural politics is broader than neo-con-
structivism, however, what is particularly important for us in this
essay,16 there is no doubt, of all the countries of the Eastern Bloc, in