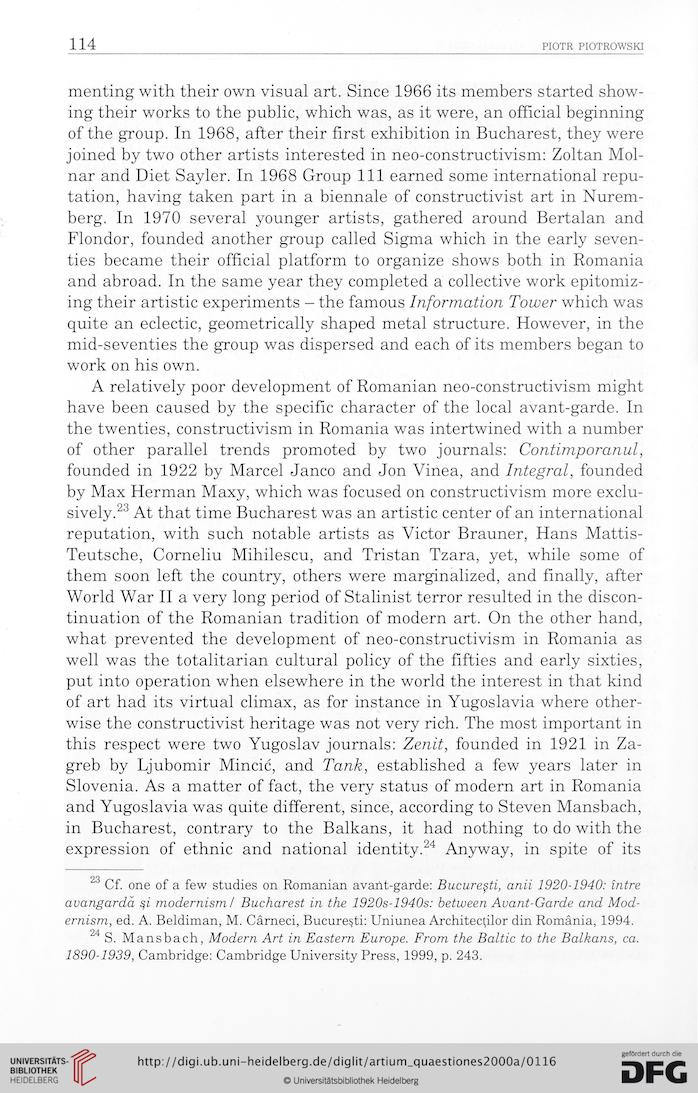 menting with their own visual art. Since 1966 its members started show-
ing their works to the public, which was, as it were, an official beginning
of the group. In 1968, after their first exhibition in Bucharest, they were
joined by two other artists interested in neo-constructivism: Zoltan Mol-
nar and Diet Sayler. In 1968 Group 111 earned some international repu-
tation, having taken part in a biennale of constructivist art in Nurem-
berg. In 1970 several younger artists, gathered around Bertalan and
Flondor, founded another group called Sigma which in the early seven-
ties became their official platform to organize shows both in Romania
and abroad. In the same year they completed a collective work epitomiz-
ing their artistic experiments - the famous Information Tower which was
ąuite an eclectic, geometrically shaped metal structure. However, in the
mid-seventies the group was dispersed and each of its members began to
work on his own.
A relatively poor development of Romanian neo-constructivism might
have been caused by the specific character of the local avant-garde. In
the twenties, constructivism in Romania was intertwined with a number
of other parallel trends promoted by two journals: Contimporanul,
founded in 1922 by Marcel Janco and Jon Vinea, and Integral, founded
by Max Herman Maxy, which was focused on constructivism morę exclu-
sively.23 At that time Bucharest was an artistic center of an international
reputation, with such notable artists as Victor Brauner, Hans Mattis-
Teutsche, Corneliu Mihilescu, and Tristan Tzara, yet, while some of
them soon left the country, others were marginalized, and finally, after
World War II a very long period of Stalinist terror resulted in the discon-
tinuation of the Romanian tradition of modern art. On the other hand,
what prevented the development of neo-constructivism in Romania as
well was the totalitarian cultural policy of the fifties and early sixties,
put into operation when elsewhere in the world the interest in that kind
of art had its virtual climax, as for instance in Yugoslavia where other-
wise the constructivist heritage was not very rich. The most important in
this respect were two Yugoslav journals: Zenit, founded in 1921 in Za-
greb by Ljubomir Mincie, and Tank, established a few years later in
Slovenia. As a matter of fact, the very status of modern art in Romania
and Yugoslavia was ąuite different, sińce, according to Steven Mansbach,
in Bucharest, contrary to the Balkans, it had nothing to do with the
expression of ethnic and national identity.24 Anyway, in spite of its
23 Cf. one of a few studies on Romanian avańt-garde: Bucureęti, anii 1920-1940: intre
auangarda ąi modernism / Bucharest in the 1920s-1940s: between Auant-Garde and Mod-
ernism, ed. A. Beldiman, M. Carneci, Bucure§ti: Uniunea Architecjlor din Romania, 1994.
24 S. Mansbach, Modern Art in Eastern Europę. From the Baltic to the Balkans, ca.
1890-1939, Cambridge: Cambridge University Press, 1999, p. 243.