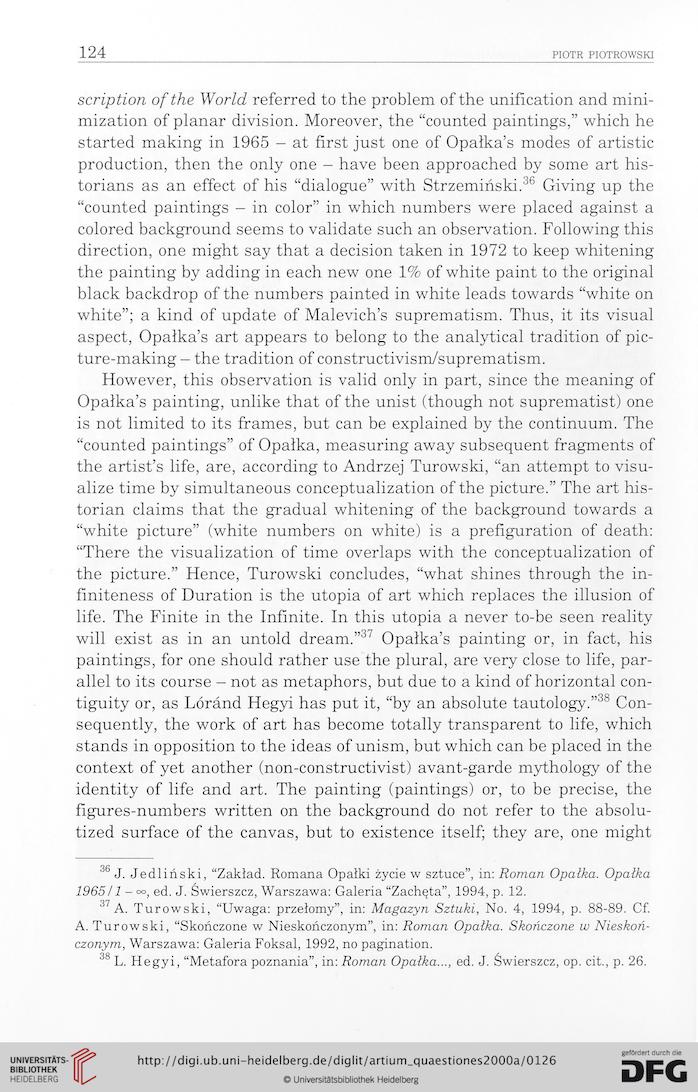 scription ofthe World referred to the problem of the unification and mini-
mization of planar division. Moreover, the “counted paintings,” which he
started making in 1965 - at first just one of Opałka’s modes of artistic
production, then the only one - have been approached by some art his-
torians as an effect of his “dialogue” with Strzemiński.36 Giving up the
“counted paintings - in color” in which numbers were placed against a
colored background seems to validate such an observation. Following this
direction, one might say that a decision taken in 1972 to keep whitening
the painting by adding in each new one 1% of white paint to the original
black backdrop of the numbers painted in white leads towards “white on
white”; a kind of update of Malevich’s suprematism. Thus, it its visual
aspect, Opałka’s art appears to belong to the analytical tradition of pic-
ture-making - the tradition of constructivism/suprematism.
However, this observation is valid only in part, sińce the meaning of
Opałka’s painting, unlike that of the unist (though not suprematist) one
is not limited to its frames, but can be explained by the continuum. The
“counted paintings” of Opałka, measuring away subseąuent fragments of
the artisfs life, are, according to Andrzej Turowski, “an attempt to visu-
alize time by simultaneous conceptualization of the picture.” The art his-
torian claims that the gradual whitening of the background towards a
“white picture” (white numbers on white) is a prefiguration of death:
“There the visualization of time overlaps with the conceptualization of
the picture.” Hence, Turowski concludes, “what shines through the in-
finiteness of Duration is the utopia of art which replaces the illusion of
life. The Finite in the Infinite. In this utopia a never to-be seen reality
will exist as in an untold dream.”37 Opałka’s painting or, in fact, his
paintings, for one should rather use the plural, are very close to life, par-
allel to its course - not as metaphors, but due to a kind of horizontal con-
tiguity or, as Lórand Hegyi has put it, “by an absolute tautology.”38 Con-
seąuently, the work of art has become totally transparent to life, which
stands in opposition to the ideas of unism, but which can be placed in the
context of yet another (non-constructivist) avant-garde mythology of the
identity of life and art. The painting (paintings) or, to be precise, the
figures-numbers written on the background do not refer to the absolu-
tized surface of the canvas, but to existence itself; they are, one might
36 J. Jedliński, “Zakład. Romana Opałki życie w sztuce”, in: Roman Opałka. Opałka
1965/l-oo, ed. J. Świerszcz, Warszawa: Galeria “Zachęta”, 1994, p. 12.
37 A. Turowski, “Uwaga: przełomy”, in: Magazyn Sztuki, No. 4, 1994, p. 88-89. Cf.
A. Turowski, “Skończone w Nieskończonym”, in: Roman Opałka. Skończone w Nieskoń-
czonym, Warszawa: Galeria Foksal, 1992, no pagination.
38 L. Hegyi, “Metafora poznania”, in: Roman Opałka..., ed. J. Świerszcz, op. cit., p. 26.