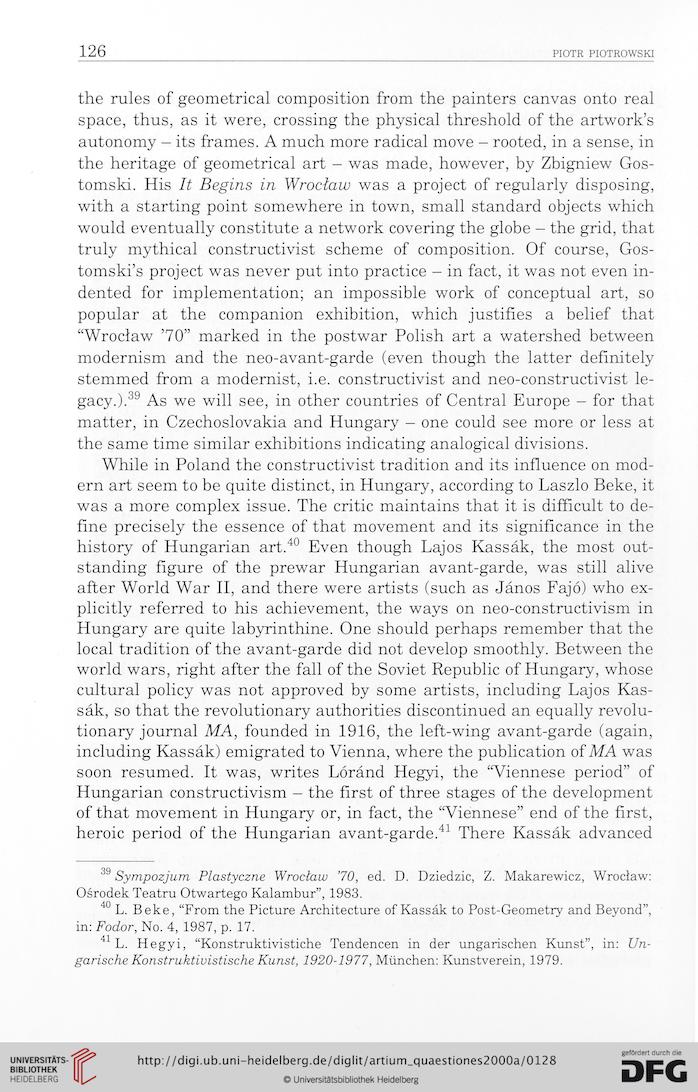 the rules of geometrical composition from the painters canvas onto real
space, thus, as it were, Crossing the physical threshold of the artwork’s
autonomy - its frames. A much morę radical move - rooted, in a sense, in
the heritage of geometrical art - was madę, however, by Zbigniew Gos-
tomski. His It Begins in Wrocław was a project of regularly disposing,
with a starting point somewhere in town, smali standard objects which
would eventually constitute a network covering the globe - the grid, that
truły mythical constructivist scheme of composition. Of course, Gos-
tomski’s project was never put into practice - in fact, it was not even in-
dented for implementation; an impossible work of conceptual art, so
popular at the companion exhibition, which justifies a belief that
“Wrocław ’70” marked in the postwar Polish art a watershed between
modernism and the neo-avant-garde (even though the latter definitely
stemmed from a modernist, i.e. constructivist and neo-constructivist le-
gacy.).39 As we will see, in other countries of Central Europę - for that
matter, in Czechoslovakia and Hungary - one could see morę or less at
the same time similar exhibitions indicating analogical divisions.
While in Poland the constructivist tradition and its influence on mod-
ern art seem to be ąuite distinct, in Hungary, according to Laszlo Beke, it
was a morę complex issue. The critic maintains that it is difficult to de-
fine precisely the essence of that movement and its significance in the
history of Hungarian art.40 Even though Lajos Kassak, the most out-
standing figurę of the prewar Hungarian avant-garde, was still alive
after World War II, and there were artists (such as Janos Fajo) who ex-
plicitly referred to his achievement, the ways on neo-constructivism in
Hungary are ąuite labyrinthine. One should perhaps remember that the
local tradition of the avant-garde did not develop smoothly. Between the
world wars, right after the fali of the Soviet Republic of Hungary, whose
cultural policy was not approved by some artists, including Lajos Kas-
sak, so that the revolutionary authorities discontinued an eąually revolu-
tionary journal MA, founded in 1916, the left-wing avant-garde (again,
including Kassak) emigrated to Vienna, where the publication of MA was
soon resumed. It was, writes Lórand Hegyi, the “Viennese period” of
Hungarian constructivism - the first of three stages of the development
of that movement in Hungary or, in fact, the “Viennese” end of the first,
heroic period of the Hungarian avant-garde.41 There Kassak advanced