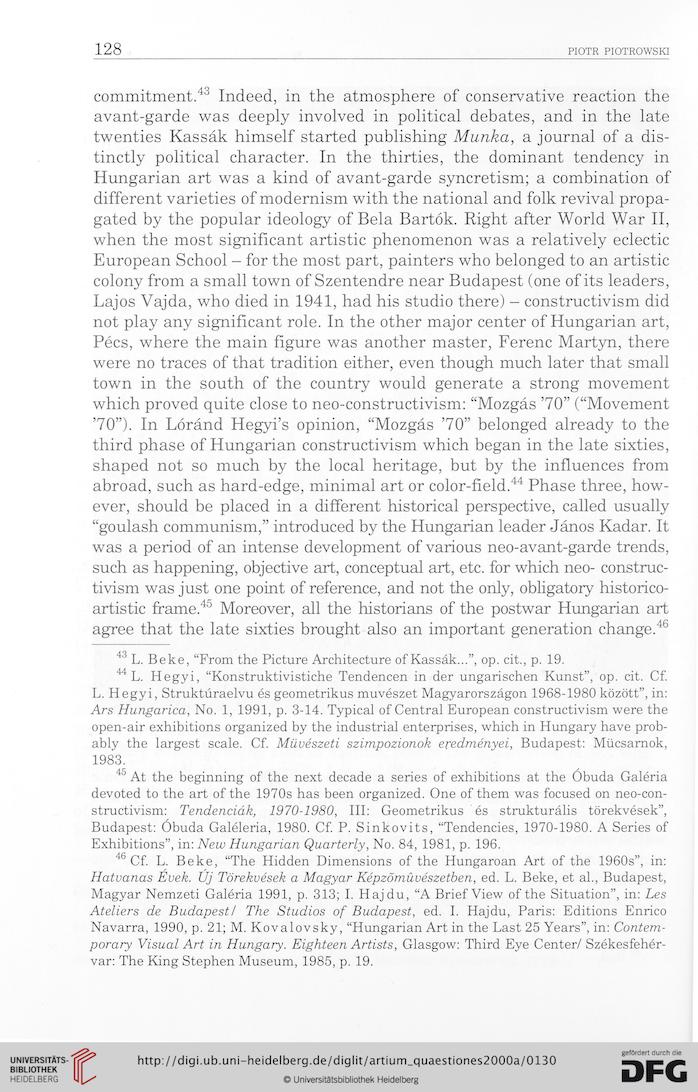 commitment.43 Indeed, in the atmosphere of conservative reaction the
avant-garde was deeply involved in political debates, and in the late
twenties Kassak himself started publishing Munka, a journal of a dis-
tinctly political character. In the thirties, the dominant tendency in
Hungarian art was a kind of avant-garde syncretism; a combination of
different varieties of modernism with the national and folk revival propa-
gated by the popular ideology of Bela Bartok. Right after World War II,
when the most significant artistic phenomenon was a relatively eclectic
European School - for the most part, painters who belonged to an artistic
colony from a smali town of Szentendre near Budapest (one of its leaders,
Lajos Vajda, who died in 1941, had his studio there) - constructivism did
not play any significant role. In the other major center of Hungarian art,
Pecs, where the main figurę was another master, Ferenc Martyn, there
were no traces of that tradition either, even though much later that smali
town in the south of the country would generate a strong movement
which proved quite close to neo-constructivism: “Mozgas ’70” (“Movement
’70”). In Lórand Hegyi’s opinion, “Mozgas ’70” belonged already to the
third phase of Hungarian constructivism which began in the late sixties,
shaped not so much by the local heritage, but by the influences from
abroad, such as hard-edge, minimal art or color-field.44 Phase three, how-
ever, should be placed in a different historical perspective, called usually
“goulash communism,” introduced by the Hungarian leader Janos Kadar. It
was a period of an intense development of various neo-avant-garde trends,
such as happening, objective art, conceptual art, etc. for which neo- construc-
tivism was just one point of reference, and not the only, obligatory historico-
artistic frame.45 Moreover, all the historians of the postwar Hungarian art
agree that the late sixties brought also an important generation change.46
43 L. Beke, “From the Picture Architecture of Kassak...”, op. cit., p. 19.
44 L. Hegyi, “Konstruktivistiche Tendencen in der ungarischen Kunst”, op. cit. Cf.
L. Hegyi, Strukturaelvu es geometrikus muveszet Magyarorszagon 1968-1980 kozott”, in:
Ars Hungarica, No. 1, 1991, p. 3-14. Typical of Central European constructivism were the
open-air exhibitions organized by the industrial enterprises, which in Hungary have prob-
ably the largest scalę. Cf. Miiueszeti szimpozionok eredmenyei, Budapest: Miicsarnok,
1983.
45 At the beginning of the next decade a series of exhibitions at the Óbuda Galeria
devoted to the art of the 1970s has been organized. One of them was focused on neo-con-
structivism: Tendenciak, 1970-1980, III: Geometrikus es strukturalis torekvesek”,
Budapest: Óbuda Galeleria, 1980. Cf. P. Sinkovits, “Tendencies, 1970-1980. A Series of
Exhibitions”, in: New Hungarian Quarterly, No. 84, 1981, p. 196.
46 Cf. L. Beke, “The Hidden Dimensions of the Hungaroan Art of the 1960s”, in:
Hatuanas Evek. Uj Tórekuesek a Magyar Kepzómuueszetben, ed. L. Beke, et al., Budapest,
Magyar Nemzeti Galeria 1991, p. 313; I. Hajdu, “A Brief View of the Situation”, in: Les
Ateliers de Budapest/ The Studios of Budapest, ed. I. Hajdu, Paris: Editions Enrico
Navarra, 1990, p. 21; M. Kovalovsky, “Hungarian Art in the Last 25 Years”, in: Contem-
porary Visual Art in Hungary. Eighteen Artists, Glasgow: Third Eye Center/ Szekesfeher-
var: The King Stephen Museum, 1985, p. 19.