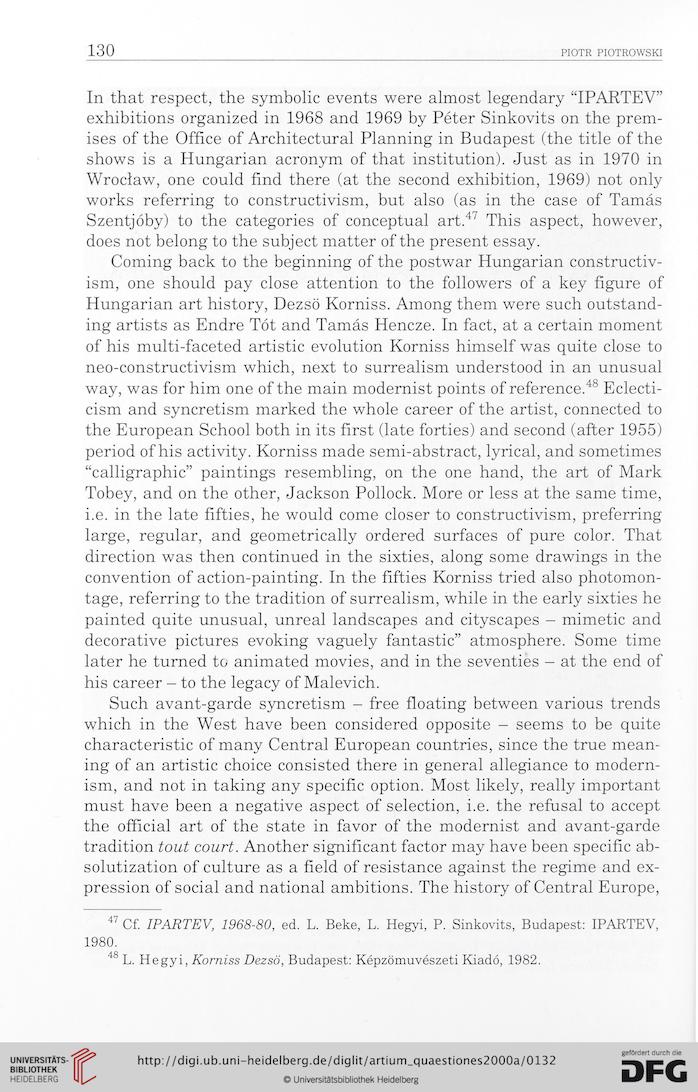 In that respect, the symbolic events were almost legendary “IPAETEV”
exhibitions organized in 1968 and 1969 by Peter Sinkovits on the prem-
ises of the Office of Architectural Planning in Budapest (the title of the
shows is a Hungarian acronym of that institution). Just as in 1970 in
Wrocław, one could find there (at the second exhibition, 1969) not only
works referring to constructivism, but also (as in the case of Tamas
Szentjóby) to the categories of conceptual art.47 This aspect, however,
does not belong to the subject matter of the present essay.
Corning back to the beginning of the postwar Hungarian constructiy-
ism, one should pay close attention to the followers of a key figurę of
Hungarian art history, Dezso Korniss. Among them were such outstand-
ing artists as Endre Tót and Tamas Hencze. In fact, at a certain moment
of his multi-faceted artistic evolution Korniss himself was ąuite close to
neo-constructivism which, next to surrealism understood in an unusual
way, was for him one of the main modernist points of reference.48 Eclecti-
cism and syncretism marked the whole career of the artist, connected to
the European School both in its first (late forties) and second (after 1955)
period of his activity. Korniss madę semi-abstract, lyrical, and sometimes
“calligraphic” paintings resembling, on the one hand, the art of Mark
Tobey, and on the other, Jackson Pollock. Morę or less at the same time,
i.e. in the late fifties, he would come closer to constructivism, preferring
large, regular, and geometrically ordered surfaces of pure color. That
direction was then continued in the sixties, along some drawings in the
convention of action-painting. In the fifties Korniss tried also photomon-
tage, referring to the tradition of surrealism, while in the early sixties he
painted ąuite unusual, unreal landscapes and cityscapes - mimetic and
decorative pictures evoking yaguely fantastic” atmosphere. Some time
later he turned to animated movies, and in the seventies - at the end of
his career - to the legacy of Malevich.
Such avant-garde syncretism - free floating between yarious trends
which in the West have been considered opposite - seems to be ąuite
characteristic of many Central European countries, sińce the true mean-
ing of an artistic choice consisted there in generał allegiance to modern-
ism, and not in taking any specific option. Most likely, really important
must have been a negative aspect of selection, i.e. the refusal to accept
the official art of the State in favor of the modernist and avant-garde
tradition tout court. Another significant factor may have been specific ab-
solutization of culture as a field of resistance against the regime and ex-
pression of social and national ambitions. The history of Central Europę,
47 Cf. IPARTEV, 1968-80, ed. L. Beke, L. Hegyi, P. Sinkovits, Budapest: IPARTEV,
1980.
48 L. Hegyi, Korniss Dezso, Budapest: Kepzomuveszeti Kiadó, 1982.