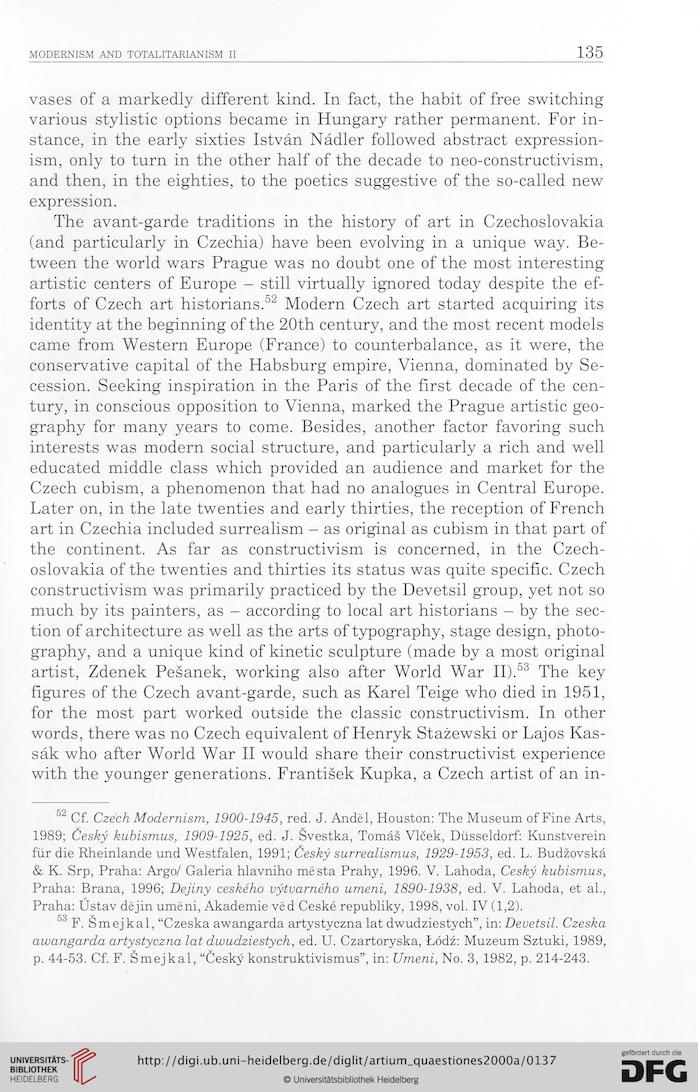 vases of a markedly different kind. In fact, the habit of free switching
yarious stylistic options became in Hungary rather permanent. For in-
stance, in the early sixties Istvan Nadler followed abstract expression-
ism, only to tura in the other half of the decade to neo-constructivism,
and then, in the eighties, to the poetics suggestive of the so-called new
expression.
The avant-garde traditions in the history of art in Czechoslovakia
(and particularly in Czechia) have been evolving in a uniąue way. Be-
tween the world wars Prague was no doubt one of the most interesting
artistic centers of Europę - still virtually ignored today despite the ef-
forts of Czech art historians.52 Modern Czech art started acąuiring its
identity at the beginning of the 20th century, and the most recent models
came from Western Europę (France) to counterbalance, as it were, the
conservative Capital of the Habsburg empire, Vienna, dominated by Se-
cession. Seeking inspiration in the Paris of the first decade of the cen-
tury, in conscious opposition to Vienna, marked the Prague artistic geo-
graphy for many years to come. Besides, another factor favoring such
interests was modern social structure, and particularly a rich and well
educated middle class which provided an audience and market for the
Czech cubism, a phenomenon that had no analogues in Central Europę.
Later on, in the late twenties and early thirties, the reception of French
art in Czechia included surrealism - as original as cubism in that part of
the continent. As far as constructivism is concerned, in the Czech-
oslovakia of the twenties and thirties its status was ąuite specific. Czech
constructivism was primarily practiced by the Devetsil group, yet not so
much by its painters, as - according to local art historians - by the sec-
tion of architecture as well as the arts of typography, stage design, photo-
graphy, and a uniąue kind of kinetic sculpture (madę by a most original
artist, Zdenek Peśanek, working also after World War II).53 The key
figures of the Czech avant-garde, such as Kareł Teige who died in 1951,
for the most part worked outside the classic constructivism. In other
words, there was no Czech equivalent of Henryk Stażewski or Lajos Kas-
sak who after World War II would share their constructivist experience
with the younger generations. Frantiśek Kupka, a Czech artist of an in-