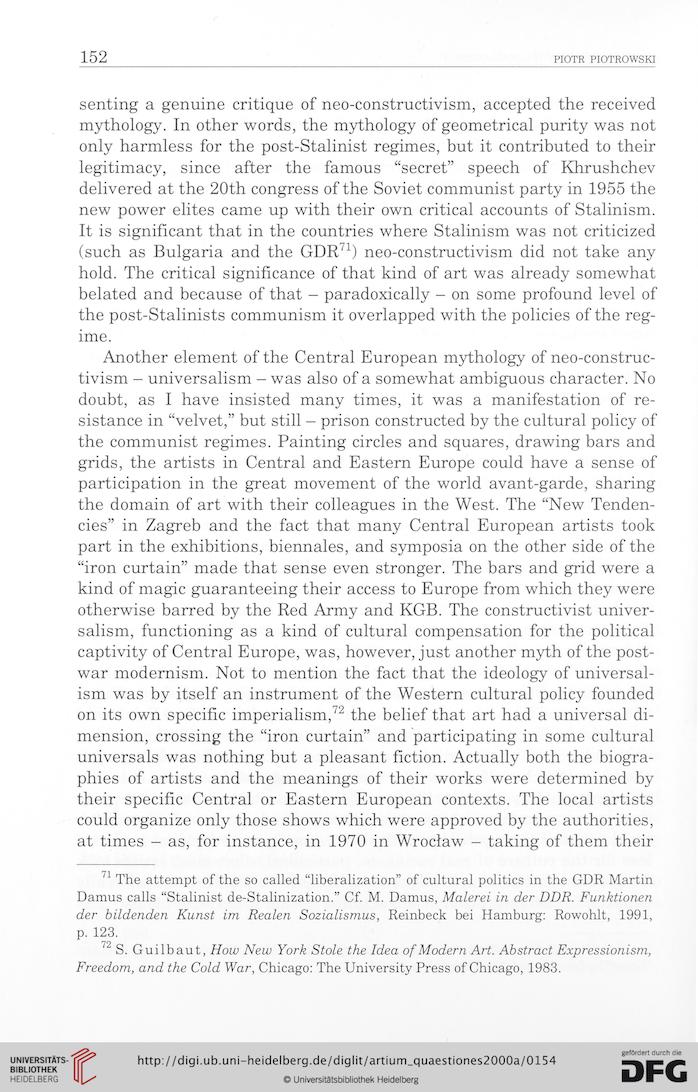 senting a genuine critiąue of neo-constructivism, accepted the received
mythology. In other words, the mythology of geometrical purity was not
only harmless for the post-Stalinist regimes, but it contributed to their
legitimacy, sińce after the famous “secret” speech of Khrushchev
delivered at the 20th congress of the Soviet communist party in 1955 the
new power elites came up with their own critical accounts of Stalinism.
It is significant that in the countries where Stalinism was not criticized
(such as Bułgaria and the GDR71) neo-constructivism did not take any
hołd. The critical significance of that kind of art was already somewhat
belated and because of that - paradoxically - on some profound level of
the post-Stalinists communism it overlapped with the policies of the reg-
ime.
Another element of the Central European mythology of neo-construc-
tivism - universalism - was also of a somewhat ambiguous character. No
doubt, as I have insisted many times, it was a manifestation of re-
sistance in “velvet,” but still - prison constructed by the cultural policy of
the communist regimes. Painting circles and sąuares, drawing bars and
grids, the artists in Central and Eastern Europę could have a sense of
participation in the great movement of the world avant-garde, sharing
the domain of art with their colleagues in the West. The “New Tenden-
cies” in Zagreb and the fact that many Central European artists took
part in the exhibitions, biennales, and symposia on the other side of the
“iron curtain” madę that sense even stronger. The bars and grid were a
kind of magie guaranteeing their access to Europę from which they were
otherwise barred by the Red Army and KGB. The constructivist univer-
salism, functioning as a kind of cultural compensation for the political
captivity of Central Europę, was, however, just another myth of the post-
war modernism. Not to mention the fact that the ideology of universal-
ism was by itself an instrument of the Western cultural policy founded
on its own specific imperialism,72 the belief that art had a universal di-
mension, Crossing the “iron curtain” and participating in some cultural
universals was nothing but a pleasant fiction. Actually both the biogra-
phies of artists and the meanings of their works were determined by
their specific Central or Eastern European contexts. The local artists
could organize only those shows which were approved by the authorities,
at times - as, for instance, in 1970 in Wrocław - taking of them their
71 The attempt of the so called “liberalization” of cultural politics in the GDR Martin
Damus calls “Stalinist de-Stalinization.” Cf. M. Damus, Malerei in der DDR. Funktionen
der bildenden Kunst im Realen Sozialismus, Reinbeck bei Hamburg: Rowohlt, 1991,
p. 123.
72 S. Guilbaut, How New York Stole the Idea of Modern Art. Abstract Expressionism,
Freedom, and the Cold War, Chicago: The University Press of Chicago, 1983.