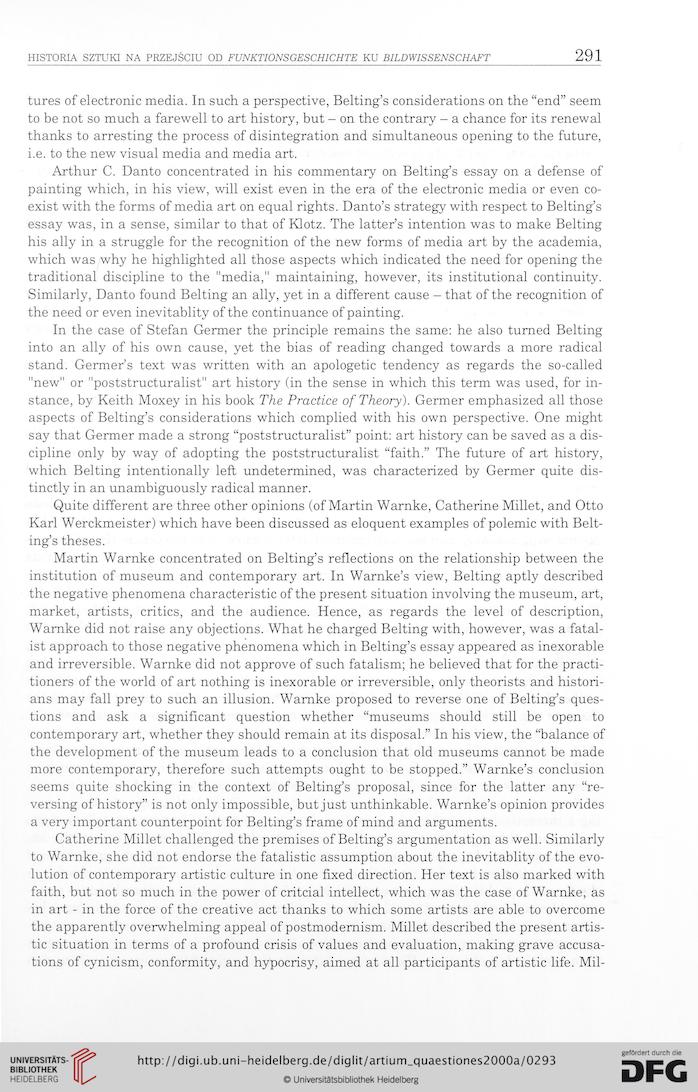 tures of electronic media. In such a perspective, Belting’s considerations on the “end” seem
to be not so much a farewell to art history, but - on the contrary - a chance for its renewal
thanks to arresting the process of disintegration and simultaneous opening to the futurę,
i.e. to the new visual media and media art.
Arthur C. Danto concentrated in his commentary on Belting’s essay on a defense of
painting which, in his view, will exist even in the era of the electronic media or even co-
exist with the forms of media art on eąual rights. Danto’s strategy with respect to Belting’s
essay was, in a sense, similar to that of Klotz. The latter’s intention was to make Belting
his ally in a struggle for the recognition of the new forms of media art by the academia,
which was why he highlighted all those aspects which indicated the need for opening the
traditional discipline to the "media," maintaining, however, its institutional continuity.
Similarly, Danto found Belting an ally, yet in a different cause - that of the recognition of
the need or even inevitablity of the continuance of painting.
In the case of Stefan Germer the principle remains the same: he also tumed Belting
into an ally of his own cause, yet the bias of reading changed towards a morę radical
stand. Germer’s text was written with an apologetic tendency as regards the so-called
"new" or "poststructuralist" art history (in the sense in which this term was used, for in-
stance, by Keith Moxey in his book The Practice of Theory). Germer emphasized all those
aspects of Belting’s considerations which complied with his own perspective. One might
say that Germer madę a strong “poststructuralist” point: art history can be saved as a dis-
cipline only by way of adopting the poststructuralist “faith.” The futurę of art history,
which Belting intentionally left undetermined, was characterized by Germer ąuite dis-
tinctly in an unambiguously radical manner.
Quite different are three other opinions (of Martin Warnke, Catherine Millet, and Otto
Karl Werckmeister) which have been discussed as eloąuent examples of polemic with Belt-
ing’s theses.
Martin Warnke concentrated on Belting’s reflections on the relationship between the
institution of museum and contemporary art. In Warnke’s view, Belting aptly described
the negative phenomena characteristic of the present situation involving the museum, art,
market, artists, critics, and the audience. Hence, as regards the level of description,
Warnke did not raise any objections. What he charged Belting with, however, was a fatal-
ist approach to those negative phenomena which in Belting’s essay appeared as inexorable
and irreversible. Warnke did not approve of such fatalism; he believed that for the practi-
tioners of the world of art nothing is inexorable or irreversible, only theorists and histori-
ans may fali prey to such an illusion. Warnke proposed to reverse one of Belting’s ques-
tions and ask a significant ąuestion whether “museums should still be open to
contemporary art, whether they should remain at its disposal.” In his view, the “balance of
the development of the museum leads to a conclusion that old museums cannot be madę
morę contemporary, therefore such attempts ought to be stopped.” Warnke’s conclusion
seems ąuite shocking in the context of Belting’s proposal, sińce for the latter any “re-
yersing of history” is not only impossible, but just unthinkable. Warnke’s opinion provides
a very important counterpoint for Belting’s frame of mind and arguments.
Catherine Millet challenged the premises of Belting’s argumentation as well. Similarly
to Warnke, she did not endorse the fatalistic assumption about the inevitablity of the evo-
lution of contemporary artistic culture in one fixed direction. Her text is also marked with
faith, but not so much in the power of critcial intellect, which was the case of Warnke, as
in art - in the force of the creative act thanks to which some artists are able to overcome
the apparently overwhelming appeal of postmodemism. Millet described the present artis-
tic situation in terms of a profound crisis of values and evaluation, making grave accusa-
tions of cynicism, conformity, and hypocrisy, aimed at all participants of artistic life. Mil-