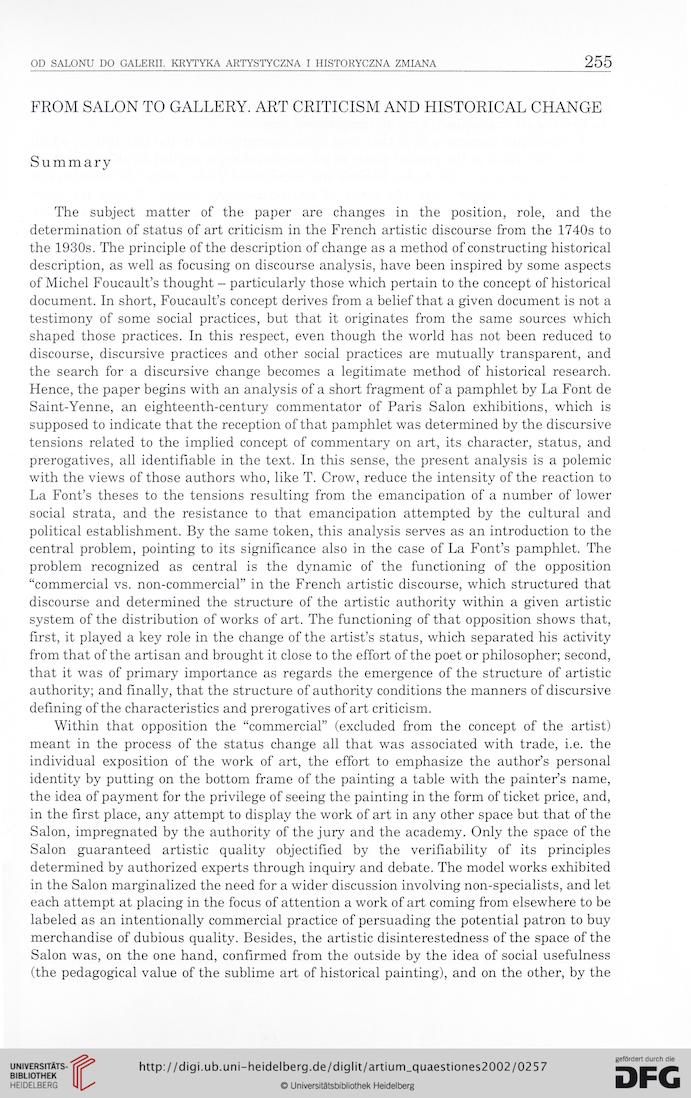 FROM SALON TO GALLERY. ART CRITICISM AND HISTORICAL CHANGE
Summary

The subject matter of the paper are changes in the position, role, and the
determination of status of art criticism in the French artistic discourse from the 1740s to
the 1930s. The principle of the description of change as a method of constructing historical
description, as well as focusing on discourse analysis, have been inspired by some aspects
of Michel Foucaulfs thought - particularly those which pertain to the concept of historical
document. In short, Foucaulfs concept derives from a belief that a given document is not a
testimony of some social practices, but that it originates from the same sources which
shaped those practices. In this respect, even though the world has not been reduced to
discourse, discursive practices and other social practices are mutually transparent, and
the search for a discursive change becomes a legitimate method of historical research.
Hence, the paper begins with an analysis of a short fragment of a pamphlet by La Font de
Saint-Yenne, an eighteenth-century commentator of Paris Salon exhibitions, which is
supposed to indicate that the reception of that pamphlet was determined by the discursive
tensions related to the implied concept of commentary on art, its character, status, and
prerogatives, all identifiable in the text. In this sense, the present analysis is a polemic
with the views of those authors who, like T. Crow, reduce the intensity of the reaction to
La Fonfs theses to the tensions resulting from the emancipation of a number of lower
social strata, and the resistance to that emancipation attempted by the cultural and
political establishment. By the same token, this analysis serves as an introduction to the
central problem, pointing to its signiflcance also in the case of La Fonfs pamphlet. The
problem recognized as central is the dynamie of the functioning of the opposition
“commercial vs. non-commercial” in the French artistic discourse, which structured that
discourse and determined the structure of the artistic authority within a given artistic
system of the distribution of works of art. The functioning of that opposition shows that,
first, it played a key role in the change of the artisfs status, which separated his activity
from that of the artisan and brought it close to the effort of the poet or philosopher; second,
that it was of primary importance as regards the emergence of the structure of artistic
authority; and flnally, that the structure of authority conditions the manners of discursive
defming of the characteristics and prerogatives of art criticism.
Within that opposition the “commercial” (excluded from the concept of the artist)
meant in the process of the status change all that was associated with trade, i.e. the
individual exposition of the work of art, the effort to emphasize the author’s personal
identity by putting on the bottom frame of the painting a table with the painter’s name,
the idea of payment for the privilege of seeing the painting in the form of ticket price, and,
in the first place, any attempt to display the work of art in any other space but that of the
Salon, impregnated by the authority of the jury and the academy. Only the space of the
Salon guaranteed artistic ąuality objectified by the verifiability of its principles
determined by authorized experts through inąuiry and debate. The model works exhibited
in the Salon marginalized the need for a wider discussion involving non-specialists, and let
each attempt at placing in the focus of attention a work of art coming ff om elsewhere to be
labeled as an intentionally commercial practice of persuading the potential patron to buy
merchandise of dubious ąuality. Besides, the artistic disinterestedness of the space of the
Salon was, on the one hand, conflrmed from the outside by the idea of social usefulness
(the pedagogical value of the sublime art of historical painting), and on the other, by the