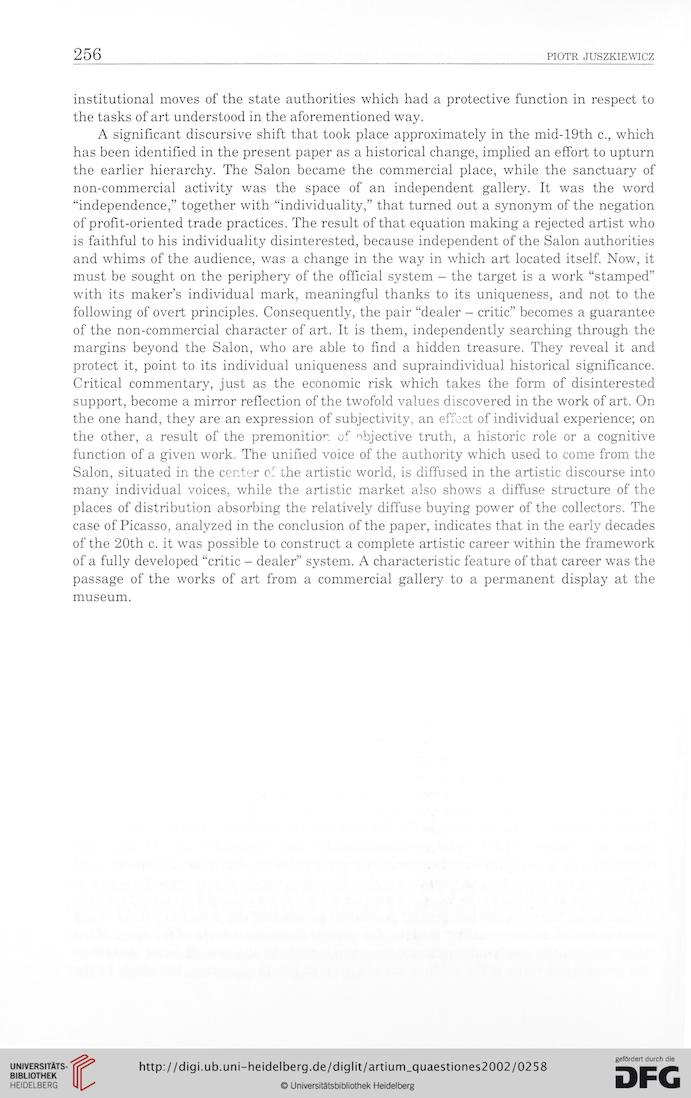 institutional moves of the state authorities which had a protective function in respect to
the tasks of art understood in the aforementioned way.
A significant discursive shift that took place approximately in the mid-19th c., which
has been identified in the present paper as a historical change, implied an effort to upturn
the earlier hierarchy. The Salon became the commercial place, while the sanctuary of
non-commercial activity was the space of an independent gallery. It was the word
“independence,” together with “individuality,” that turned out a synonym of the negation
of profit-oriented trade practices. The result of that eąuation making a rejected artist who
is faithful to his individuality disinterested, because independent of the Salon authorities
and whims of the audience, was a change in the way in which art located itself. Now, it
must be sought on the periphery of the official system - the target is a work “stamped”
with its maker’s individual mark, meaningful thanks to its uniąueness, and not to the
following of overt principles. Conseąuently, the pair “dealer - critic” becomes a guarantee
of the non-commercial character of art. It is them, independently searching through the
margins beyond the Salon, who are able to find a hidden treasure. They reveal it and
protect it, point to its individual uniąueness and supraindividual historical significance.
Critical commentary, just as the economic risk which takes the form of disinterested
support, become a mirror reflection of the twofold values discovered in the work of art. On
the one hand, they are an expression of subjectivity, an effect of individual experience; on
the other, a result of the premonitiou of objective truth, a historie role or a cognitive
function of a given work. The unified voice of the authority which used to eome from the
Salon, situated in the center of the artistic world, is diffused in the artistic discourse into
many individual voices, while the artistic market also shows a diffuse structure of the
płaces of distribution absorbing the relatively diffuse buying power of the collectors. The
case of Picasso, analyzed in the conclusion of the paper, indicates that in the early decades
of the 20th c. it was possible to construct a complete artistic career within the framework
of a fully developed “critic - dealer” system. A characteristic feature of that career was the
passage of the works of art from a commercial gallery to a permanent display at the